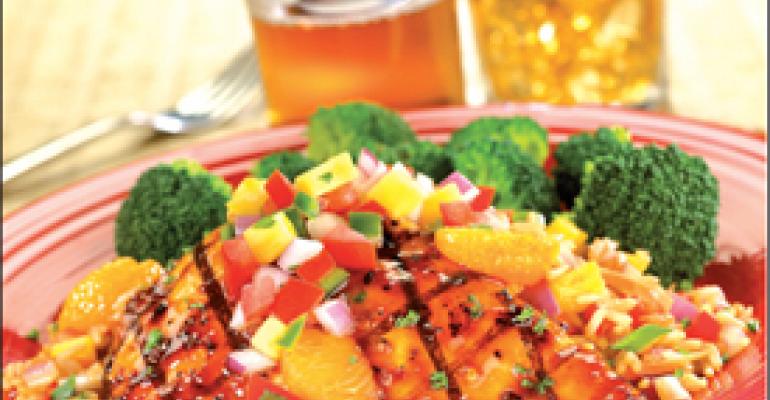 Dinnerhouses cut portions down to size

After years of following a bigger-is-better course, casual-dining chains are paring down their entrée portions to address dietary demands, though some brands admit to trepidations and recall a leading chain’s hasty abandonment of a sales-stunting portion reduction ploy not long ago.

Willing to accept smaller checks in exchange for higher traffic, the 582 domestic units of T.G.I. Friday’s unveiled reduced portion options in March with a large-scale media campaign by the division of Carlson Restaurants Worldwide of Carrollton, Texas.

The 50-unit Black-eyed Pea chain, based in Denver, says it is finding success with its reduced-sized lunch entrées. And Darden Restaurants Inc. of Orlando, Fla., recently green-lighted the expansion of its seven-unit Seasons 52 upscale-casual concept, whose entrées are limited to no more than 475 calories each.

Even The Cheesecake Factory, the Calabasas Hills, Calif.-based chain known for large portions and take-home bags of leftovers, has added a “weight-management” section to its menu that features salads with fewer than 590 calories.

While operators worry about check averages being reduced and operational challenges heightened, the driving factor—consumer interest in smaller portions—represents a sea change from just three years ago.

Ruby Tuesday Inc. in 2004 ran into punishing consumer resistance after it cut some portion sizes without fanfare while publicizing that it was the first casual-dining chain to make on-menu disclosure of a wide variety of nutritional data on all food items.

In January 2005, after quarterly same-store sales slumps of more than 5 percent at franchises and more than 8 percent at corporate units, Ruby Tuesday cried uncle and returned to larger servings and less information. The sales slide was blamed in part on the temporarily trimmed portions of pastas, fries and some entrées.

At the time, Sandy Beall, chairman and chief executive of the now 900-unit Ruby Tuesday, explained the sales erosion by saying: “We made some menu portion decisions [that] were a mistake. We have adjusted the portion issues in our menu and will be much more aggressive in food-oriented television ads.”

But even then there were niggling signs that consumers’ desires for something smaller would force chains to surmount a portion-related learning curve. In 2005, Paul Avery, chief operating officer of OSI Restaurant Partners Inc., said smaller portions had posed an unforeseen check-reduction problem at Outback Steakhouse.

“Sometimes you make a decision and you think it’s a nobrainer, like the Kid Steaks,” he told investors then in a conference call. “It really worked, but it’s working too well; [consumers] are getting a 6-ounce sirloin for quite a deal. Adults are ordering that through [carryout], and how do you challenge the consumer on that?”

Still, Outback tested smaller portions, lower prices and a “value meal” in the Midwest, but nothing proved to be a barn burner.

“The protein is about half the amount,” he said. “A typical protein size for us would be 8 to 9 ounces. These particular entrées are at 5 ounces. They have been well-accepted, and they continue to gain ground. Our latest numbers indicate that it makes up about 40 percent of our lunch entrées now. It’s pretty strong.”

Shoemake said the company is continuing to discuss portion adjustments, perhaps for dinner.

“I think when you tell the customer the size of the entrée, that’s a big mistake,” he said. “When you give the guest the option to have the large portion if they so desire, or have the small portion, that’s the right direction to go. I think the majority of aging baby boomers are looking at their intake of the amount of food they are eating, and some want an offering that doesn’t affect taste but has less protein.”

Black-eyed Pea’s reduced-portion options are featured in their own block on the menu, Shoemake said.

“Along with the concern over trans fats, portion sizes are a huge issue and gaining ground,” he said. “It’s only going to get stronger.”

Operationally, he said, the new menu has “been extremely easy to put into effect.”

“We heard from our guests that while people really enjoy taking home a lot of food, because that’s part of the value of The Cheesecake Factory or Grand Lux Cafe, but they weren’t doing that during lunch so much,” he said. “They wanted to have more variety of lunch-sized portions and not have to split a bigger dish with someone, which they can still do.”

The “weight-management salads,” each of which have no more than 590 calories, including the dressing, have been a hit, Gordon said. They were introduced in the December-through-February menu rollout, and customer response has prompted plans for more such alternatives.

“We’re going to expand upon it through the next few menu changes,” he said.

Similarly, Snead at Carlson said he expects T.G.I. Friday’s per-person check averages to fall as a result of its smaller-portion options, but he said the initiative is expected to increase traffic.

However, “it’s kind of scary,” Snead said. “There are other people who have made reductions at lunch. This is a first bold step for all-day, and we are working in menu R&D to add some new items to it.”

Friday’s had been developing the “Right Portion, Right Price” menu for six months, and test marketing revealed that some customers were choosing to split a dessert or other item.

“We think some of that will happen,” he said. “This is really customer-driven. There is a sales slump in the industry, but I think it’s because the consumer is searching for more in casual dining. This is answering the consumers’ call for choice.”

“The sweet spot in this is about $8 or $8.50,” Snead said. “We are responding to what we think is a fundamental change in the consumer.”

Bon Appetit, a subsidiary of Charlotte, N.C.-based Compass Group North America, rolled out the program systemwide March 1 after a year of testing. It emphasizes fresh vegetables, fruits, legumes and whole grains, and portion sizes based on the U.S. Department of Agriculture’s daily recommendations for 3 to 4 ounces of protein, a half-cup of whole grains and a cup of vegetables.

Snead cited surveys indicating that 51 percent of consumers—and 63 percent of women—say portions are too big. Customers say “they are not interested in buying more than they can eat and putting it in a to-go bag, putting it in the refrigerator and then three days later throwing it out,” he said.

He said customers want personalization and customization. The “Right Portion” menu has three categories: four versions of current menu items, like Jack Daniels Chicken Alfredo and Cajun Shrimp and Chicken Pasta; three “Better for You” items with fewer than 10 grams of fat and 500 calories, like Dragon-Fire Chicken and Key West Shrimp; and three “Lighter, Fresher, Cleaner” dishes, such as cedar salmon on field greens and Bistro Sirloin Salad.

“I have to tell you, I’m a little nervous,” Snead said. “I think we are responding to a change in the consumer. We recognize you are making choices in your life where you don’t want all these big portions. I think we are able to bring smaller prices and smaller portions into the marketplace.”