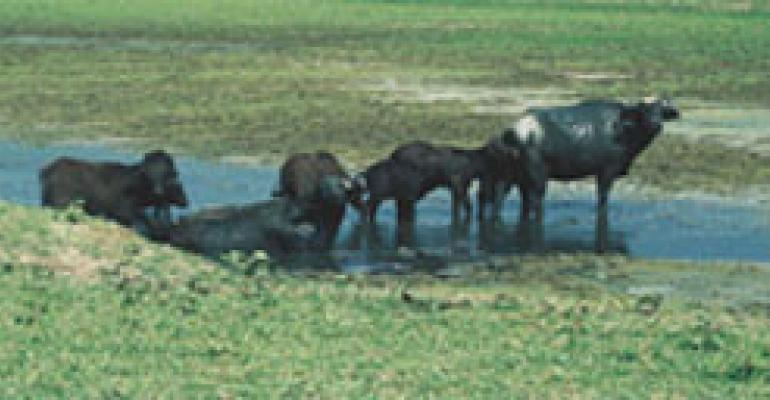 Buffalo meat, hot peppers and saffron may not be a trinity of ingredients that spring to mind when people think of Greek cuisine, but they are among the many ingredients that define the complex, local cooking of Greece’s northern region, specifically Macedonia, the country’s largest region, and Thrace, which borders it to the east.

Macedonia and Thrace are arguably among the least-known regions of Greece, especially to American travelers, who mostly flock to the country’s post-card perfect island beaches. The area’s cuisine is also not exactly well-represented on the Greek restaurant menus of North America either for several reasons. For example, a generation or two ago, when Greek immigrants were opening their first restaurants in the United States, most hailed from the islands. Additionally, beyond the diner and the family-friendly taverna, Greek restaurant operators eventually found commercial success in the grilled-fish eateries that came to define the upper end of the cuisine until fairly recently.

Yet the cuisine of Macedonia and Thrace offers a wealth of dishes that can be adapted easily to America’s Greek restaurants. The menu at Pylos in New York, for example, is chock-full of dishes inspired by or directly culled from the cooking of northern Greece.

One traditional regional dish is soutzoukakia Smyrneika, or cumin-scented ground meat sausages. Another is pork braised in the region’s xynomavro wine, with dried fruit and chestnuts. The galaktoboureko, a classic Greek dessert, is shaped into triangular phyllo pieces more akin to Thessaloniki’s sweet bougatsa pastry. Like bougatsa, the dessert is sprinkled with powdered sugar.

The region’s continental climate, especially in places like Naoussa, Goumenissa, and Amyntaio, make it home to a host of prize-winning red wines, crisp whites and aromatic rosés. It was in Macedonia that the first international vinis vinifera grapes were planted on Greek soil, three decades ago, when visionary vintner and ship owner Yiannis Carras hired Vangelis Gerovasiliou, a young oenologist fresh from studies in Bordeaux, to oversee the first plantings and eventual blending of Greek and international grapes. Gerovasiliou has gone on to become one of Greece’s star winemakers.

The other “father” of the modern Greek vineyard, Yiannis Boutaris, under whose wings an entire generation of Greek wine-makers got their start, also hails from one of Macedonia’s oldest wine-making families. Macedonia and Thrace are on the forefront of wine tourism, with a well-organized program called the Wine Routes of Northern Greece, aimed at attracting road travelers to tour the 33 wineries and sights in the region.

Ironically, Macedonian vintners set in motion a revolution in the vineyard two decades ago that helped put Greek wines on the map internationally. They also sparked a revolution in the Greek kitchen inspiring a new generation of Greek chefs both in Greece and beyond, and yet the region’s own cuisine remains largely undiscovered outside its borders.

Regional Macedonian cuisine is a multifaceted mirror of the land’s historical place as a crossroads between East and West but also of its fecund agricultural traditions. Because it has always been one of the most fertile parts of the Balkans, neighboring armies marched through the area aiming to claim the region’s promising landscape. Romans, Slavs, Bulgurs and Ottomans, among others, all left their stamp on Macedonia and its cuisine. Similarly, the nomadic Vlachs and Sarakatsens, who until the 1960s were itinerant shepherds, helped establish the region as one of Greece’s premiere dairy producers and also gave the country some of its most delicious dishes. Some of the best feta, kasseri, Manouri and other Greek cheeses are produced in Macedonia and Thrace, and the region is also home to countless savory pies filled with wild greens and cheeses, the tradition that spawned the spanakopita of Greek-American restaurant fame.

Arguably the largest single influence on the local cuisine came with the million or so Greek refugees from the shores of Asia Minor, which is present-day Turkey, who arrived in 1922 as a result of the political upheavals of the time. They brought with them a wealth of new dishes, such as moussaka, stuffed vine leaves and cumin-spiced ground meat sausages, to the small-plate meze custom. These culinary traditions have come to be beacons not only of regional Macedonian cuisine but also of Greek cooking in general.

Macedonia’s ability to absorb and co-opt varied influences also has continued in more recent years. As the Soviet Union broke down more recent political divisions, thousands of Greeks who had been living in the former territories in the Caucasus and around the Black Sea returned, bringing with them yet another layer of foods and customs to be woven into the tapestry of northern Greece. These flavors are slowly inspiring a younger generation of Greek chefs.

One such chef, Vassilis Kalydis, who was born and raised in Thessaloniki, decided to bring his native cuisine south to the capital and opened Aneton, a smart, hip restaurant in one of Athens’ northern suburbs. Among his Macedonian-inspired creations are cumin-scented sausages made with fish instead of ground meat. He also takes local cheeses, such as Manouri, which is like ricotta salata, and turns it into a mousse served with wine-poached pears. Another favorite is his chocolate ganache with Macedonian halva mousse.

History shaped part of the Macedonian table, but the region’s own geography has probably played the strongest role in how the cuisine developed.

Greece’s highest mountains, Olympus and the Pindus range, are in Macedonia. They surround vast plains that supply the country with wheat, corn and other crops. On their slopes, apples, pears, peaches, apricots, cherries and, of course, grape vines, flourish. Macedonia’s coldest mountain enclaves are where the Greek giant beans are grown, especially around Prespes, the lake region that borders Albania. Macedonia is also where many nuts, from walnuts to almonds to hazelnuts, grow.

The nuts find their way into local cooking in some distinctly regional ways. Walnuts, for example, not only provide the stuffing for the many syrupy phyllo pastry specialties of Thessaloniki, Greece’s second-largest city and Macedonia’s capital, but also they go into sauces, dips and savory pies. Ground walnuts often appear in Macedonian roasted eggplant sauce, or melitzanosalata, as well as skordalia, a garlicky dip paired with fried cod. Additionally a type of savory pie replaces ground meat with ground walnuts in a savory trio with tomatoes and onions.

Almonds and hazelnuts provide snack food, but the latter recently have assumed a much different role, as the source for something rare and prized: black truffles. At press time the first cultivated Greek black truffles were being harvested from under groves of young hazelnut trees in Pieria, in the southeastern part of the region. The truffles, weighing in at some 30 ounces each, are the result of the efforts of a few risk-taking farmers, who started the project 15 years ago.

Macedonia’s black truffles sell for about half the price of Perigord’s.

“We’re trying to reintroduce this ancient treat into the local cooking,” says Panagiotis Koukoumvitis, who sells the truffles. “I shave it over grilled octopus. You can’t imagine how delicious that is.”

Yet another gourmet delicacy from Macedonia is saffron. Greece is one of the world’s three major saffron producers. Here the spice is known as crocus Kozanis, after the town in central-western Macedonia where about 1,500 families form the cooperative that grows and sells the two and a half to seven tons of precious stigmas that Greece produces annually. About a quarter of the saffron harvest is consumed domestically; the rest is exported.

Saffron, although part of the Greek flora for ages, came to be a commercial crop in Macedonia in the late 19th century and appears more readily in the region’s beverage industry, as a flavoring for grappa-like distillations and as an aromatic addition to coffee. Long overlooked in traditional cuisine, contemporary Greek chefs have rediscovered it, using saffron in such dishes as fillet of sole cooked in a lemon-tomato sauce with saffron and mastic. Lefteris Lazarou, one of Athens’ most renowned chefs, uses the ingredient in saffron-yogurt mousse, a frothy take on the milk shake with saffron, cardamom and Aegina pistachios.

In Thessaloniki on any day of the week, for example, the market place bustles with dozens of meze restaurants serving up the tiny dishes that help define this region.

A meze offering might be as simple as a single, grilled pepper or a plate of grilled sardines dressed in olive oil and garnished with paper-thin raw onion rings.

The region’s love affair with the eggplant translates into everything from crunchy, stuffed pickled baby eggplants wrapped with thin strands of Greek celery, garlic and parsley to pillow-soft plump small eggplants stuffed with caramelized onions and cooked in copious amounts of olive oil.

Seafood is a whole other chapter on the small-plate theme, and the region, whose coastline is a lacework of coves and bays, provides many local specialties. Foremost among them are the small, thin mussels found off the coast of Halkidiki. In local tavernas they come batter-fried, stuffed with rice and onions or cooked with a tiny local pasta called kouskousi. They are sometimes also lightly braised in either wine or tomato sauce in one of the many versions of saganaki. Americans have come to know saganaki as pan-fried cheese, but the dish is technically anything cooked in the shallow fire-to-table skillet of the same name.

Northern Greece, specifically Thrace, is also the only place in Greece where buffalo roam, or, rather, wallow in the shallow marshes. They represent yet another traditional dish: kavourmas, seared buffalo and beef chunks seasoned with garlic and herbs and preserved in their own silken suet. The dish was made in agrarian homes and kept in clay jugs, like French confit. Innovative producers now make kavourmas in modern facilities and shape it into cylinders about five inches in diameter, the better for slicing and sautéing.

Macedonians and Thracians tend to prefer robust flavors, and they find the perfect vehicle in the region’s rainbow-colored peppers. Perhaps no other raw ingredient so defines the cooking of Macedonia and Thrace as the pepper: sweet, hot, fresh, dried, flaked and powdered. They range in appearance from plump and stout for stuffing, small and horn-shaped for pickling, long and lithe for frying, and red and fleshy for roasting and brining.

Peppers appear in massive quantities from midsummer to midfall in everything from aromatic stews to one of the most popular Greek regional dishes around, htipiti, a fiery spread of creamy feta, olive oil, lemon juice and peppers.

The taste for the hearty, strong-bodied dishes runs in other directions, too. For example, the local cookery is filled with fruit-and-protein combinations that are not found elsewhere in Greece. Prunes get tossed into leek and tomato stews or into veal and beef stews, and quince is another favorite, cut into slices like a potato and cooked with chicken or beef and tomato or even stuffed with ground meat and cinnamon.

With so much history and so many great raw ingredients at their disposal, the region’s restaurants tend to be pillars of tradition. The trends toward more innovative cooking that have taken hold of Athenian chefs have been slow to take root in the north. With few exceptions, the restaurant scene in Macedonia and Thrace is still highly localized.

For American restaurant professionals, that might just be its greatest appeal. There is a whole new Old World to discover in the foods and flavors of northern Greece.