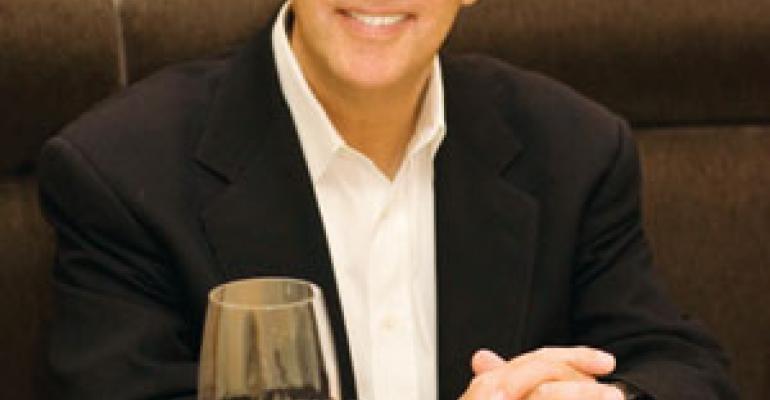 On the Cutting Edge; Foodies in Suits: Richard Melman

Richard Melman doesn’t pat the burgers as he did almost four decades ago when he opened R.J. Grunts, an eatery with a ‘70s vibe that’s still popular today. But the founder and chairman of Chicago-based Lettuce Entertain You Enterprises Inc. still charts the company’s course when it comes to food.

“I’m heavily involved in menu development and always have been,” says Melman, who fondly recalls his days manning the kitchen of Grunts, the first LEYE restaurant, which he opened in 1971 with his late partner Jerry Orzoff. “One of the first things I insisted on having was a test kitchen in the corporate office where we could work on food.”

Although the founder soon yielded cooking duties to those with more culinary talent, his fork has never been far from the food. Over the years, LEYE, or Lettuce, as it is informally known, has grown to more than 70 units and approximately $360 million in annual sales and earned a reputation as one of the nation’s most influential and diverse multiconcept operators.

Now, since handing over his president and chief executive roles to company veteran Kevin Brown a few years ago, Melman has even more freedom to practice his own special talent for brainstorming and refining dishes and restaurants. That is reflected in recent company forays into concepts as diverse as Chinese steamed buns, crêpes, Italian scaloppine and seafood dining. In fact, seafood will be showcased in a modern high-end restaurant called L.2O, a partnership with superstar French chef Laurent Gras, slated to open in Chicago this spring.

How involved in food is the chairman?

“I would say he drives probably 98 percent of the projects,” says corporate chef Tim Hockett.

In fact, Hockett notes, food is often the starting point of a concept.

“So as we’re developing a project, or even before it has fully materialized, we’re cooking ideas for the project,” he says.

That was the case with Wow Bao, a Lettuce quick-service eatery featuring bao, or steamed Chinese buns.

“Rich saw an incredible item that was just going to be a side dish at one of our Asian restaurants,” Hockett says. “Instantly, he knew he had an entire concept out of that one item—Chinese buns with 12-15 fillings.”

There are now three Wow Bao units in Chicago.

Melman stirs the pot by popping into the Lettuce test kitchen for impromptu tastings often.

“He’s in there daily, if not two or three times a day,” says corporate chef Rita Dever. “He likes to know what we’re doing, and he likes to add his input. And we welcome it.”

In addition, he regularly presides over formal group tasting sessions in which new dishes are evaluated. On such occasions, Melman plays moderator and arbiter. Around the table there may be as many as a dozen Lettuce associates, including partners, corporate chefs, restaurant chefs and officials like Brown.

In such instances, Melman is known for sharing a clear vision of his food ideas, giving detailed feedback on the dishes and considering others’ opinions. For example, take the corned beef and cabbage that Melman conceived a few years ago for L.Woods Tap & Pine Lodge, Lettuce’s supper club in Chicago.

“I wanted a specific cut of corned beef that was extra lean, no fat,” Melman recalls. “It had to be a raw cut, not precooked, because I wanted to add a specific spice blend to the water, and it had to be cooked in such a way so that it was tender enough to cut with a fork, and served with a special mustard.”

Such test-kitchen input is a key part of the company’s food-driven culture, Hockett says.

“A lot of other corporate offices would dictate down to the restaurants what has to be done,” he says. “But we’re a help-minded corporate office. I think that vibe starts with Rich. He’s here to help everyone be successful, not to dictate what he wants.”

Also helpful is the fact that the chairman is usually nearby for quick feedback.

“If I have something that I’ve cooked and it’s ready to go, I’ll just knock on his door,” Dever says. “At many meetings—I won’t say every meeting—they’ll stop for food. They really want to taste it and see it.”

Adds Hockett, “We tasted and re-tasted to find the most tender scaloppine we could find, with just the right flavor profile and the right breadcrumb.”

An item legendary for its lengthy development process is the Boston cream pie at Joe’s Seafood, Prime Steak and Stone Crab in Chicago.

If there’s one item that remains elusive, it is fudge.

“We’ve had people working on fudge for three years,” Melman says. “I’m still looking for a specific taste and texture that I haven’t found yet.”

“Fudge is the flippin’ Holy Grail here,” Dever says with a laugh. “If I ever get the fudge right, I will retire. He has a very clear idea in his head of how he wants it to taste.”

During test-kitchen sessions, there is often discussion about whether a prospective dish is ready for the menu or needs more work. Melman has the deciding vote.

“I think you need a leader or you don’t get anything accomplished,” he says. “That’s usually me. But I listen to what everyone has to say.”

Company insiders agree that Melman has a talent for knowing his customers. He puts himself in their shoes.

“I have a friend named Patty who is a vegan,” Melman says. “One of the questions I ask myself is what’s on this menu for Patty. I have another friend named Joel who is very knowledgeable about Italian food. So he’s the type of person we would invite for a menu tasting.”

Sometimes a panel of consumers is convened to test products; other times Lettuce associates are the testers.

“If we’re doing a concept for young people, we might ask the young people at the office to try it out,” Melman says.

Even so, there are still surprises.

“There are things that I thought would be hits that never made it,” Melman says. “In the first week a new restaurant is open, we know what works and what doesn’t.”

Dever sees a couple of additional talents in the boss.

“First, he’s almost clairvoyant,” she says. “He seems to know what food in the future is going to be before we see it.”

“Way before cupcakes got hot—way before—I remember Rich wanted cupcakes,” Dever says.“I was like,‘Yeah, right, cupcakes.’ But sure enough, they swept the nation.”

She also notes his “impeccable” taste buds and memory for flavors.

“He can pick up the slightest amount of any spice or seasoning,” Dever says. “Oftentimes, people cannot dissect flavors, but he has that ability to know exactly what’s in a dish.”

Looking back at nearly four decades with a hand in menus, Melman is especially fond of one dish in particular: the Grunts burger at R.J. Grunts.

“Of the many things I’ve worked on, I remember that because it was the first thing I cooked,” he says. “I still crave it. I think it is as good as any.”

If he has been stymied in popularizing any dish, it is tapioca pudding: “I’ve never been able to sell tapioca to any degree, even though I love it,” he says.

And when he comes back from a trip, choosing his most craveable food is easy:“Give me a great piece of Italian or French bread, good olive oil, a simple pasta and a good glass of wine, and I’m a pretty happy guy.”