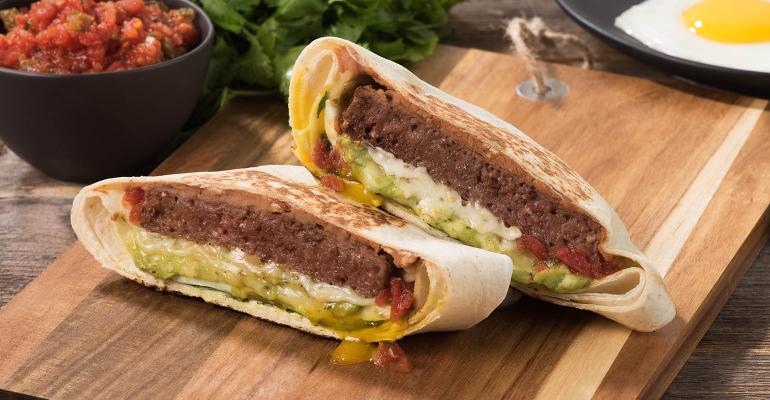 The key ingredients needed to create a successful signature burger? Make it memorable, craveable and comforting, says James Walker, president of global operations and development at Johnny Rockets, a pioneer in the fast-casual better-burger segment.

“It is important to have something that when you eat it, it is fun and exciting, but also comforting,” says Walker. “We as Americans are looking for a respite from what’s going on in the rest of the world.”

The chain also recently launched as a limited offer the Crunchy Bacon Avocado Ranch Burger, made from certified Angus beef and topped with American cheese, Applewood smoked bacon, onion rings, sliced avocado, lettuce, tomato and ranch dressing on a brioche roll. While the burger offers a mix of textures and flavors, the key is that the composition of the sandwich showcases the flavor of the certified Angus beef, says Walker.

“The American cheese and creaminess of the avocado don’t conflict with the flavor of the beef, and they don’t cover it up,” he says. “It’s just that warm, smooth mouthfeel of the cheese and the avocado, and the crunch of the crispy onion rings.”

“Today’s consumer wants higher quality ingredients … That’s kind of where it starts,” he says, citing the importance of having the right blend of beef cuts with the right proportion of fat.

At Burger Bar, Susser menus a signature burger he calls the Sears Burger, which is made from a blend of brisket, sirloin and chuck, topped with an aged cheddar, “billionaire’s bacon” — caramelized with brown sugar — tomatoes and lettuce.

Dean Small, founder and president of Synergy Restaurant Consultants, agrees that understanding the beef blend is important. Cuts with a high fat content such as short rib and brisket can be blended with chuck and/or sirloin to achieve an optimum flavor profile.

In addition to getting the beef blend right, operators also need to sandwich it on the right bun, says Small. The bun — many operators are using brioche rolls, he notes — needs to absorb the burger’s juices  that help with the overall flavor, and also needs to be the right size for the patty.

“You need to have the right ratio of bun to burger, so you don’t have this massive bun relative to a small burger,” he says.

He also notes that following the right preparation procedures and using the right equipment are important in producing a high-quality finished product. Forming the patties by hand helps produce a burger with the right “chew,” and using a plancha-style grill that can sear the meat at high temperatures can yield a juicier, better-tasting burger, he says.

Allowing the flavor to come through

Simplicity is also important. Susser of Chef Allen’s Consulting notes that in the many burger tastings and cook-offs where he has served as a judge, “It always seems to go back to the grass roots of the burger itself.”

“Generally the judges want a great cheeseburger without too many things on it — a burger that is juicy and hot, with the flavor of the beef coming through,” he says.

Many of the signature offerings among the current crop of fast-casual, better-burger concepts follow a formula in which the ingredients showcase the quality of the beef.

The ShackBurger from Shake Shack, for example, is made from a proprietary beef blend which yields a flavorful, juicy and tender patty, topped with American cheese, lettuce, tomato and special sauce, and served on a toasted potato roll. Created by restaurateur Danny Meyer with an assist from meat purveyor Pat LaFrieda, the ShackBurger is the addictive burger that many fast-casual burgers aspire to be.

In addition to the ShackBurger, another fast-casual burger that has been making headlines is the Manly Burger from Umami Burger. This creation is made from a proprietary blend of beef cuts ground in-house, topped with beer-cheddar cheese, bacon lardons, onion strings, umami ketchup and a mustard spread.

“The snap of the bacon and bite of the beer cheddar somehow doesn't obscure the patty, which with any burger should be the main attraction,” wrote Men’s Journal magazine in a review of the Manly Burger last year.

Meanwhile, the Charburger from the Habit Burger Grill also has been receiving accolades. Named the best-tasting burger by readers of Consumer Reports in a national survey, the Charburger is cooked over an open flame and topped with fresh lettuce, tomato, caramelized onions, pickles and mayonnaise on a toasted bun.

Other signature burgers in a similar league include the offering at Hopdoddy Burger Bar, which grinds its own Angus beef burgers and bakes its own rolls in-house. The Classic Burger is a single patty with red leaf lettuce, white onion, beefsteak tomato and sassy sauce.

AdvancePierre, a supplier of burger products to the foodservice industry, suggests several creative burgers that operators can menu, such as the Huevos Rancheros Taco Burger. It is made by spooning some black beans onto the center of a tortilla, and then topping with a cooked burger patty, shredded Monterey Jack cheese, guacamole, fried eggs, salsa and cilantro. The tortilla is then folded into a square shape and grilled until brown on all sides.