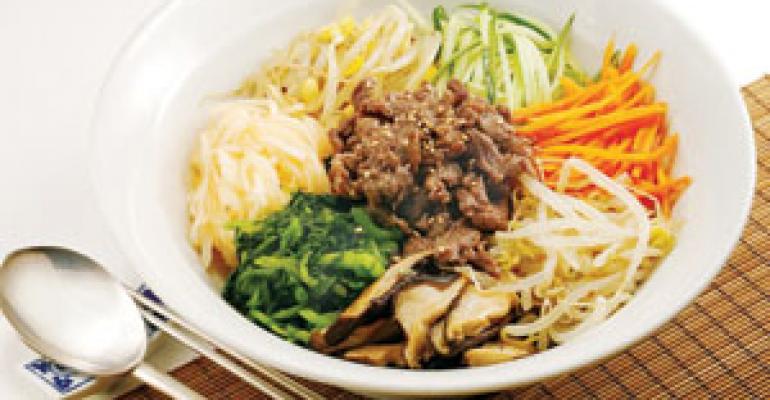 Bibimbap and bulgogi may not be familiar to many U.S. diners, but most do know kimchee, the Korean staple made from fermented vegetables that embraces the Asian belief of balancing five flavors: salt, sweet, sour, hot and bitter.

But now Korean cuisine has come of age in the United States. Independent restaurants offer authentic flavors and Korean fusion, and a few multiunit operations are starting to lead patrons beyond kimchee to bibimbap, bulgogi and many other Korean classics.

“Asian food is quickly becoming the fastest-growing segment of the restaurant industry,” says Richard Hong, general manager of Sorabol-Korean BBQ and Asian Noodles, a 16-unit mother-son venture based in Oakland, Calif. “Within the Asian segment, I think Korean food definitely is enjoying most of the growth.”

“Kimchee itself is like the trademark of Korea, so if you add kimchee to a dish it would automatically have a Korean twist to it,” says Esther Han, daughter of Zechariah Han, owner of New Seoul Korean restaurant in Madison, Wis. “University students here love the spicy kick of kimchee in our fried rice and eggs.” The fried rice sells for $5.95.

Kimchee is not just a fad amongst college students.

Although there are many variations of kimchee, this fermented staple is predominantly prepared with pickled cabbage and found holding court amongst multiple little side dishes, known as banchan, accompanying Korean meals. Along with rice, they’re complimentary and vary in number depending upon the location. Banchan and Korean cuisine in general uses a lot of garlic and chile pepper, as well as scallions, ginger, vinegar, mustard, honey, soy and sesame.

At Bar Q in New York, chef Anita Lo’s Asian-inspired barbecue menu offers a braised bone-in pork shank glazed with gochujang sauce. Menued as spicy Berkshire pork wings with watermelon and shiso salad, it sells for $12 as a starter, and $24 as an entrée.

Additional main dishes there that showcase Korean influences include a grilled short rib with Korean flavors for $27 and seafood stew with kimchee-anchovy broth and crispy silken tofu for $25.

Chewy cellophane noodles made from sweet-potato starch is sometimes offered as banchan or a regular main course. For $8.95 at the New Seoul back in Madison, the noodles are stir-fried with bulgogi, or marinated, seared beef, and tossed in a soy, garlic and sesame sauce with sliced fish cake, carrot, mushroom and cabbage.

Unbeknownst to many, Koreans prepare rolls like sushi, usually putting meat in theirs instead of fish like the Japanese. Others use seafood though. Outside of Seattle in Shoreline, Wash., for example, there’s a Korean place called Bada Sushi that offers Korean and Japanese cuisines using seafood such as salmon and tuna in rolls priced between $5 and $10.

Koreans, however, are most famous for their barbecue. Sorabol-Korean BBQ and Asian Noodles’ top seller is a house special barbecue chicken, dak gui. Dark thigh meat is butterflied and marinated in soy, garlic-ginger sauce and cooked on a gas-charbroiled grill.

“It would definitely taste better over a real coal barbecue, but the shopping mall locations we’re in don’t permit that,” says general manager Hong.

Depending upon location and how much the rent is, the chicken dish sells between $6.50 and $9. Asian-restaurant business is good, even with high rents.

“I can tell you from one particular location in Century City Mall in Los Angeles, sales have doubled from seven years ago in terms of volume,” Hong says, “not just monetary-wise because we have increased our prices since then, but in terms of the number of tickets a day.”

At Do Hwa in New York, customers grill their own meats. The top-selling grilled item is their off-the-bone short ribs kalbi that is marinated in soy and garlic, says general manager Bryan Santiago. It sells for $27.

Traditionally Koreans eat family-style with everything on the table at the same time and everyone sharing.

“Here at the restaurant we encourage that,” says Peter Mah, owner of Jin Ju in Chicago, “but we separated items into appetizers and entrées to make it more of a Western thing, as most of our customers are non-Korean.”

“Dolsot bibimbap is probably one of the biggest sellers,” Mah says, adding that the $14 dish is served in a sizzling stone circular hot pot with a mound of rice topped with a sunny-side-up egg, surrounded by strips of beef, tofu, chicken or pork, with radish, carrot, mushroom, bean sprouts, spinach and lettuce—and gochujang on the side.

“Dolsot means stone pot,” he says. “Bap means rice, and bibim means to mix. We explain to people that they should start by adding a little bit of the gochujang to the dish and mix it all together. That’s the whole purpose of the dish, and it tastes much better than when picking at it.”

Sorabol-Korean BBQ and Asian Noodles offers bibimbap that Hong calls a vegetable rice bowl with bulgogi for $8.95-$9.15, depending on the location.

“Across the board, bibimbap is our most popular dish; at lunch and dinner, it is the staple,” says Santiago of Do Hwa, which charges $16 for the dish at dinner and $11.95 at lunch.

Rivaling their bibimbap, Do Hwa offers a lunch box special ranging from $10.95 to $11.95. Each compartmentalized box includes the sweet-potato noodles, a green-leaf salad, vegetable dumplings, pan-seared tofu, rice, and choice of meat or fish. Bulgogi—pan-seared thinly sliced rib eye marinated in soy sauce and garlic, shredded and a little on the sweet side—is the most requested, while dak gui, thin slices of chicken breast in a sesame marinade, is the runner-up.

Santiago says that ssam is also very popular at Do Hwa. Traditionally perilla leaves, also known as shiso, are used to wrap sticky rice, doenjang and/or gochujang paste, and bulgogi or other types of bite-size meats or seafood into rolled bundles and eaten by hand. Garlic and any other banchan on the table can be added to the wraps.

At Do Hwa, red-leaf lettuce and perilla leaves are used for wraps. The ssam are served with a miso sauce. Offered at the barbecue grill table for two people, ssam with bulgogi sells for $24. A seafood mixture of shrimp and mushrooms in sesame and rice wine marinade sells for $25.

For a Korean tea New Seoul offers a ginger rendition for $1.95. They marinate the fresh root in honey “turning it into something like ginger marmalade where it loses its crispness, but retains its aroma,” Han says.