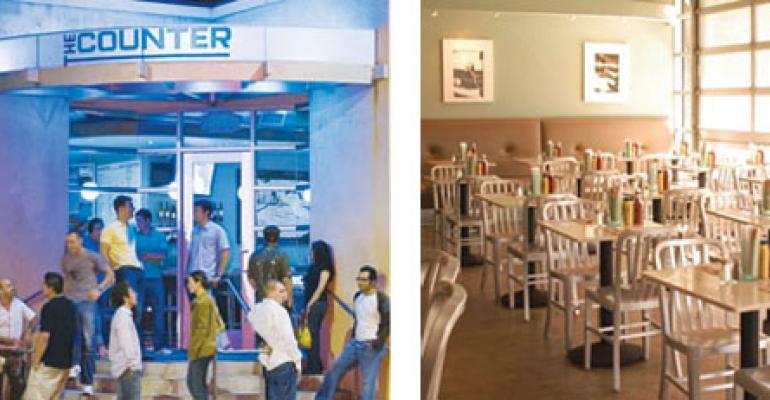 Gruyère, dried cranberries, fried eggs, apricot sauce and ginger-soy glaze are not ingredients you’d usually associate with a hamburger. But then again, this is not your usual burger joint. Which is exactly what founder and chief executive Jeff Weinstein had in mind when he opened The Counter in Santa Monica, Calif., in 2003.

“We are about choice—custom-built burgers for a custom-built life,” says Brian Berman, The Counter’s director of marketing.

When customers walk in they’re greeted, seated and handed a clipboard, and then it’s down to business.

There is also a small menu of signature burgers, but 80 percent of customers choose to design their own.

Four kinds of burgers in three sizes, 10 cheeses, 28 toppings, 18 sauces, three buns and 312,120 combinations all add up to customer choice and quality ingredients, a concept that’s hitting a pretty strong chord with customers across the country. The chain has grown to 11 stores nationwide, and is poised for an aggressive expansion through franchising. With 14 to 16 more locations set to start building burgers this year in California, Virginia, Connecticut, Utah and Hawaii, The Counter will rev up the pace in 2009 with an expected 40 to 45 new stores. More than 100 stores are currently in development domestically, with two set to open internationally in Ireland and Australia. Long-term growth plans call for 400 to 600 units.

The Counter’s industrial-modern decor and signature garage doors complement the restaurant’s laid-back atmosphere, where “we play our music loud, and our servers wear their pants a little baggier than everyone else,” Berman says. During the summertime, the garage doors roll open to create an open-air restaurant.

Food writer and Chicago Sun-Times restaurant critic Pat Bruno says of The Counter: “There’s always room for someone who does it just a little better, or puts a little different spin on it, or captures the moment.”

The restaurant uses only 100-percent natural, hormone- and antibiotic-free meats: certified humane, freshly ground Angus beef and vegetarian-raised chicken and turkey. Customers can also choose a veggie burger or burger-of-the-month. A typical one-third-pound burger emerges from the kitchen in 10 to 12 minutes.

The Counter’s version of a salad, the Burger in a Bowl, serves customers’ choices, sans bun, on a blend of lettuce or mixed baby greens. Starters include French fries, sweet-potato fries, onion strings and fried dill pickle chips served with apricot sauce. Hand-dipped shakes come in eight flavors including a shake-of-the-month.

Traffic is split almost evenly between dayparts, with 56 percent of business in the lunch daypart.

“Burgers are an item that people don’t typically consider for dinner, but The Counter is kind of bucking that trend,” Berman says.

Most locations have liquor licenses, another way The Counter sets itself apart from the typical burger joint. Alcohol constitutes 5 percent or more of sales.

The average check is between $12 and $13, which customers pay at the table after eating.

The Counter extends the restaurant experience online with The Counter Culture community at .

“The intention behind it was about people looking at The Counter as more of a lifestyle brand than just a restaurant,” Weinstein says. “We saw a lot of companies out there that we felt were interesting and that our customers, because they like The Counter, would like these other things, too.”

A quick search on Flickr, a photo-sharing website, turns up thousands of Counter burger images, posted by customers.

Weinstein holds a degree in foodservice management and has been active in the business side of the industry since his 1998 graduation, after which he moved to Los Angeles to work under restaurateur David Reiss, managing several of his restaurant ventures. In 2001 Weinstein and two partners opened L.A.-hotspot Firefly. By 2003 Weinstein was tired of leaving work at 4 a.m., and was looking for a new project he could sink his teeth into that had better hours and was closer to his Santa Monica home.

His original Santa Monica location, which has been sold to a franchisee, had an average unit volume of $2.6 million when it was under Weinstein’s ownership.

Weinstein’s brainchild had initial success, prompting him in 2005 to think about expanding the business. He partnered with Craig Albert and the pair began selling franchises in 2006. Albert now serves as The Counter’s co-chief executive and is in charge of franchise sales and development.

Dramatic changes occurred after The Counter was featured in GQ magazine’s 2006 “The 20 Hamburgers You Must Eat Before You Die” list and on “The Oprah Winfrey Show.”

“We were already doing well, but any PR always helps sales; it just increased our customer awareness,” Weinstein says. “The GQ article was great, and then Oprah picked up the GQ article and we saw a sales[20 percent] bump.”

As the company expands, it plans to retain one-third of stores, franchising the remainder in five-store-minimum territories. Franchisees work with CB Franchise Systems LLC to create a marketing plan and negotiate real estate leases with an ideal restaurant size of 2,500 to 3,000 square feet. Franchise start-up costs range from $575,000 to $2.2 million.

“Once you’ve come into this restaurant and once you try the concept and what you’ve created,” Berman says, “that’s really when you understand what this is all about, and it drives you to want to come back and make a new creation or try your own creation again.”