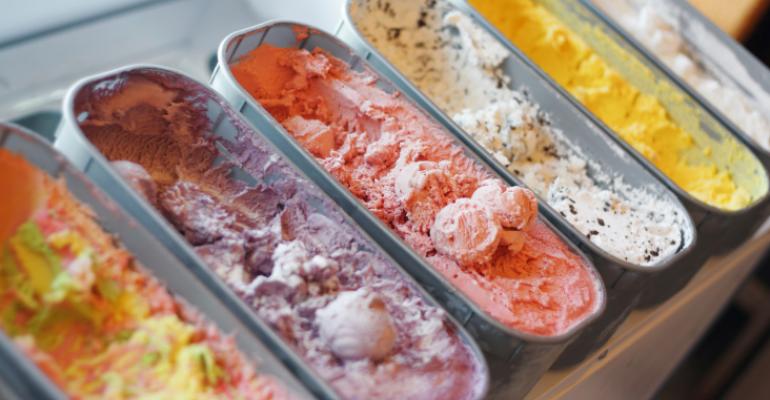 Frozen desserts are becoming more diverse as restaurants offer more flavors and portion sizes to compete with retailers, according to Technomic.

Technomic, in a recent market study, said frozen desserts in foodservice account for slightly less than half of total frozen dessert sales in the $13.3 billion-a-year industry.

The firm’s study found that consumers turn to quick service restaurants in particular for items such as milk shakes, sundaes and other desserts that require multiple ingredients to make.

They also like variety, Technomic found, and although the favorite ice cream flavors remain vanilla, chocolate and strawberry, other fruit flavors, caramel and pistachio also are enjoyed, as are cookie dough and mint chocolate chip.

“Complexity, customization, and portions are all very important,” said Technomic director Mary Chapman. “Operators need to differentiate their items from those offered by retailers, and they need to make the offerings available in various sizes to attract diners who are concerned with health, value, or are simply too full to eat a large dessert.”

Segment leader Dairy Queen, which operates or franchises more than 5,700 restaurants worldwide, did that last year with the introduction of its Mini Blizzard, a 12-ounce version of its signature customizable milk shake.

Culver’s, a 424-unit burger and frozen custard chain based in Prairie du Sac, Wis., is following suit in the coming weeks with the introduction of a 6-ounce version of its Concrete Mixers — shakes made from the custards with assorted toppings available for mixing in.

The smaller version will be available for about $1 less than 12-ounce concretes. The desserts also are available in 16-ounce and 22-ounce sizes.

The 6-ounce size is being introduced “to address right-size portioning,” Culver’s executive chef Jim Doak said, but customers are really turning to frozen desserts for indulgence, he added.

“Concretes continue to be the headline for us,” he said, noting that the customizable shakes have enjoyed double-digit growth year-over-year for the past three years.

Customers seem to enjoy adding other desserts to the shakes, Doak said, noting that brownie batter, cookie dough and cheesecake flavors all are selling well.

He said desserts that combine retro and indulgent get a lot of trial from customers.

“One of the biggest hits last year was our pumpkin pecan cheesecake, “ he said, resulting in their using 60 percent more pumpkin than they anticipated.

The item was a variation of the seasonal pumpkin pecan concrete they offer every fall. Adding the cheesecake put sales “through the roof, off the charts,” Doak said.

Technomic noted that autumn, not spring or summer, is the favorite season to offer limited-time frozen desserts, with November being the top month for LTOs in the category in 2009 and 2010.

He said the chain also was looking at adding cobblers and entire pieces of pie to concretes, as well as exploring offering hot and cold elements in one dessert, beyond the classic hot fudge sundae and Culver’s signature turtle sundae, which has hot fudge, caramel and salted, roasted pecans.

He said customers were also making their own sweet-salty combinations.

“We find people buying chocolate concrete mixers and dipping their fries in it,” he said. “It becomes a real snacking occasion.”