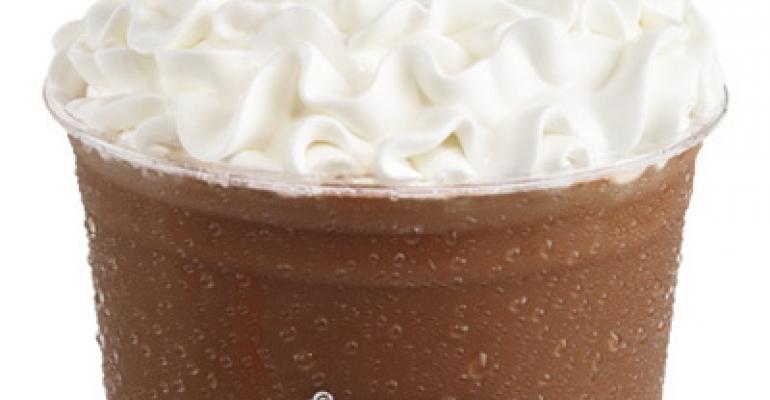 Dunkin’ Donuts and Krispy Kreme Doughnuts are adding to their growing lineups of frozen beverages just in time for hot summer days.

Dunkin’ is offering Frozen Hot Chocolate this summer at participating units of its 9,700-unit chain, while the 652-unit Krispy Kreme is reportedly testing doughnut milk shakes.

Dunkin’s Frozen Hot Chocolate, a cool slush version of the traditional wintertime drink, was inspired by the popularity of the Coolatta line that the Canton, Mass.-based chain has been serving since 1997.

“We’ve always known that our guests love Dunkin’s hot chocolate and Coolatta drinks,“ Stan Frankenthaler, executive chef of parent company Dunkin’ Brands Inc., said through a spokesman. “The Frozen Hot Chocolate is indulgent like a winter beverage and cold and refreshing like a summer Coolatta.”

Dunkin’s latest beverage, starting at $2.69, will be sold in 16 ounce, 24 ounce and 32 ounce sizes, and will available through August. The chain also is featuring a Mountain Dew Coolatta and a Blue Raspberry Coolatta this summer.

Meanwhile, Krispy Kreme is trying out doughnut-based milk shakes in five North Carolina stores, according to a report in the Greensboro North Record. The shakes, which consist of soft-serve ice cream and cake doughnuts, come in three flavors: Original Glaze, Chocolate Cake and Raspberry Filled, the paper said.

Winston-Salem, N.C.-based Krispy Kreme did not return requests for comment.

For example, Canada’s Tim Hortons is offering its iced cappuccino for a new price of $1.99 and also started serving new low-fat yogurt smoothies. McDonald’s introduced a Frozen Strawberry Lemonade in May, and Arby’s is featuring a Jamocha Oreo Shake this summer.

While the frozen beverage push is strongest during the summer months, Dunkin’s chief marketing officer John Costello insists that their popularity isn’t necessarily dependent on the weather.

“Over the past few years, we’ve seen a significant increase in the popularity of our frozen beverage, not just in warm-weather months but all throughout the year,” Costello said in a statement. “Frozen beverages provide our guests with the refreshment and extra boost they need to get through their busy days.”