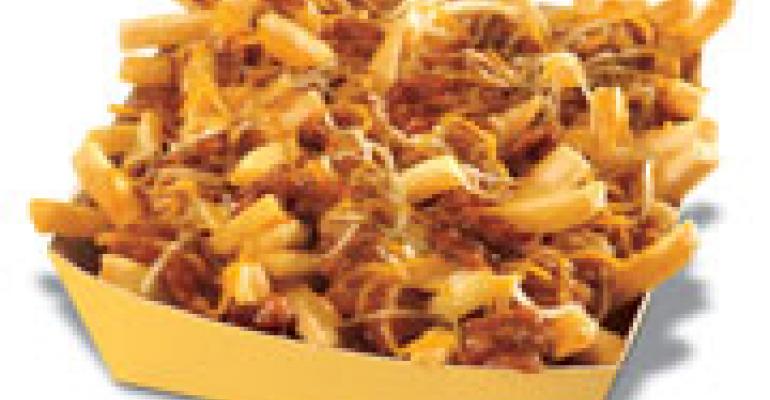 Chili-cheese items back on the menu at Carl's Jr.

CARPINTERIA Calif. Carl’s Jr. is bringing back its popular line of chili-topped burgers and fries.

The burger features a charbroiled beef patty topped with beef chili, American cheese, tomato, onion, pickles and mustard. The chili-cheeseburger is available with a single or double patty. Carl's Jr. also is rolling out a chili-cheese version of its Six Dollar Burger, which features a Black Angus beef patty. Suggested pricing for the burgers are $2.99 for a single chili-cheeseburger, $3.99 for a double and $4.79 for a Chili Cheese Six Dollar Burger. The burgers also are available in a combo meal for $4.99, $5.99 and $6.79, respectively.

Carl's. Jr.'s Chili Cheese Fries come with the same beef chili and melted jack and cheddar cheeses and are served with a fork for $2.79. The chili-cheese fries can be substituted in a combo for an additional charge, the company said.

The chili-cheese menu items were originally introduced as a limited-time offer in November 2002, a company spokeswoman said.

Carl's Jr. is supporting the return of the chili-cheese line with televisions ads that will begin airing Sunday during the broadcast of the Academy Awards. The ads were developed by Los Angeles-based Mendelsohn Zien, the same agency that created for the chain a racy commercial starring Paris Hilton.

Carl's Jr. is a division of Carpinteria-based CKE Restaurants Inc., which also is the parent of the Hardee's chain.