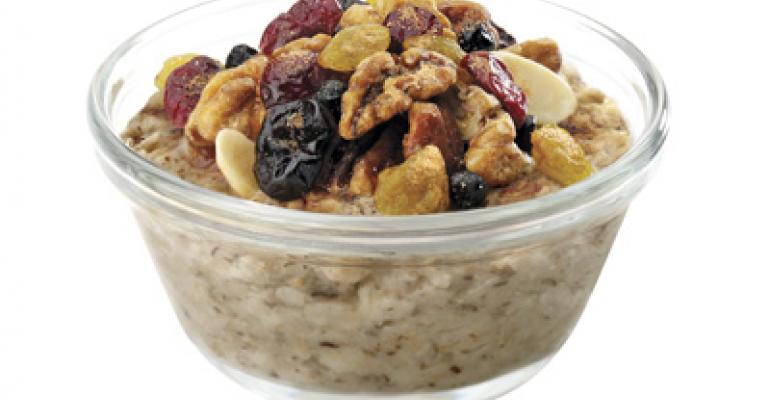 Chick-fil-A to roll out oatmeal

Chick-fil-A Inc. will be following the restaurant industry grain Monday when it debuts a new steel-cut oatmeal on its breakfast menu.

The Atlanta-based quick-service chain will offer oatmeal in an eight-ounce bowl for $2.49, or as part of a breakfast meal including a small coffee and medium fruit cup for $5.65.

“Our customers have made it clear that they would like to have healthier alternatives for breakfast,” Woody Faulk, Chick-fil-A’s vice president of brand strategy and design, said in a statement.

“Over the past few years we have tried to respond to those requests by diversifying our menu with healthier options, such as the yogurt parfait we introduced last year, and our fruit cup and multigrain bagel we added a few years ago,” he said.

At 120 calories without toppings and 2.5 grams of fat, the company sees the oatmeal as an alternative to its popular chicken biscuit.

Several quick-service chains have added oatmeal over the past few years. In May, McDonald’s partially credited sales of its Fruit & Maple Oatmeal, which it introduced in January, with higher same-store sales.

Starbucks and Jamba Juice have also had success with oatmeal. Menu research firm Datassential said oatmeal was mentioned on restaurant menus in 2010 nearly 14 percent more often than in 2008.  And Burger King is reportedly testing it.