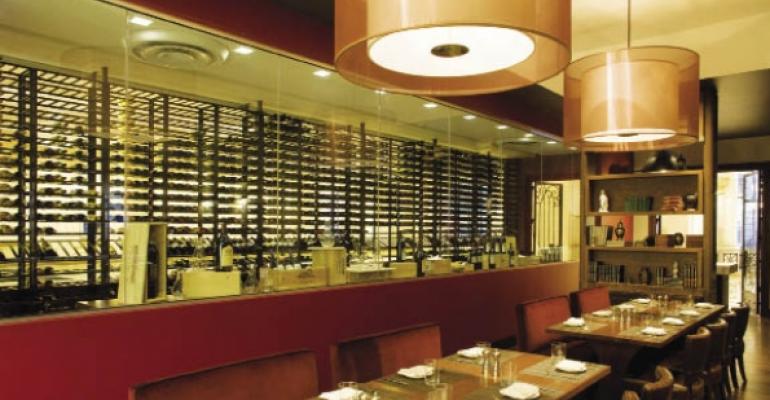 Renowned Chicago architect Daniel Burnham once said: “Make no little plans. They have no magic to stir men’s blood and probably will themselves not be realized.”

The new 610-room JW Marriott Chicago hotel in the renovated Continental & Commercial National Bank Building, Burnham’s 1914 neoclassical showpiece in Chicago’s financial district, is an example of the type of big plan the architect likely would have approved.

At a cost of $396 million, the first 12 floors of the former bank were gutted and rebuilt as a luxury hotel in the spirit of Burnham’s work. About $2.5 million was spent on foodservice equipment, a mix of conventional and cutting-edge gear ranging from a hearth pizza oven to advanced combi ovens, induction cooktops and a sophisticated demand-controlled ventilation system that saves energy.

Although the vintage architecture lends period charm, it also created challenges in kitchen design. The principal challenge was housing the cooking plants for two stand-alone operations — Marriott’s banquet and room service business, and The Florentine, a restaurant run by an outside operator — in one long, narrow space alongside the Grand Ballroom.

“We worked on one big kitchen, but we had two clients to serve,” said kitchen designer Dan Bendall, principal of FoodStrategy, a foodservice consulting firm in Rockville, Md. Bendall worked with Marriott officials to set up their space and with BLT Restaurant Group staff to outfit The Florentine, the feature restaurant that BLT runs as a separate operation. The 125-seat Italian fine-dining concept is the first Chicago location for the New York-based multiconcept operator, which has 20 restaurants.

Bendall’s marching orders were to create high-performing kitchens while preserving the historic character of the setting. “We were working in a space where our kitchen in part would be along window walls, which needed to be protected,” Bendall said. “A bank is not built to be a hotel. But it worked out fine.”

A key element of The Florentine is a display pizza and antipasti station built around a stone-hearth pizza oven. Clad in white tile, it produces 12-inch diameter, thin-crust pizzas like the classic Margherita, topped with tomato, fresh mozzarella and basil, $11; and the Florentine, with broccoli, garlic confit, ricotta and lamb sausage, $16. A cold food merchandising unit on the counter shows off antipasti, such as grilled octopus with giant white beans, $16.

The oven is fired with gas rather than wood because the installation of a separate exhaust duct for solid-fuel equipment would be prohibitively expensive. Asked if he missed having a wood oven, Todd Stein, executive chef of The Florentine, said, “Of course, always, but what we have is actually more precise and gives us a more consistent product.”

The area also allows glimpses of the cooking action in the back-of-the-house without intruding on the mood of the dining room. “Guests can see the pastry station and bits and pieces of the rest of the kitchen,” Stein said.

An automatic pasta cooker keeps pace with orders for the six pasta dishes on the menu, like Stein’s signature bucatini carbonara, made with pancetta, cracked pepper, pecorino and duck egg, $14 for a half portion, $26 for a full portion; and squid ink spaghetti alla chitarra, with lump crab, serrano chilies and mint, $15 for a half portion, $28 for a full one. The pasta cooker “is one of the most important pieces of equipment for cooking pasta correctly,” Stein said.

A combi oven in The Florentine kitchen “is programmable and incredible,” Stein said. “We use it to roast tomatoes and braise items, anything that is roasted or braised that needs control.”

Adding portable firepower to the kitchen are heavy-duty induction cooktops in the pastry, cold food and display pizza stations.

Capping it off is a highly efficient ventilation system. Variable speed fans in the kitchen hoods ramp up the exhaust flow rate when heat or smoke is detected and ramp down when it is absent. “This obviously saves a lot of energy because you are not exhausting as much conditioned or heated air or using as much electricity to run the fans,” Bendall said.

The banquet and room service areas on the Marriott side of the kitchen also are well equipped for their tasks. The key pieces are a large, high-capacity combi oven with roll-in plate racks and open burners, griddles, ovens and fryers. A conveyor plating belt makes banquet assembly faster.

“Chefs stand along the belt, and as the plates move by, one chef puts on the entrée, another the starch, another the vegetable and the last one garnishes the plate and covers it to be sent out,” Bendall said.

Demand-controlled ventilation system: Adjusts hood fan speed and exhaust flow rate as needed to handle cooking emissions.  “As energy prices keep going up, I think more and more operators will look at it, even your smaller restaurants,” said kitchen designer Dan Bendall of FoodStrategy, based in Rockville, Md. “The smaller you are, obviously the more you have to look at payback. But in a hotel as large as this, it should be a real money saver over the years.”

Combi oven: Cooks with three programmable modes — convection, steam and combination — for flexibility and precise control.  “The combi allows you to do a variety of functions with the same piece of equipment in the same footprint. It really saves on space and allows them to do a lot of products and do them very well,” Bendall said.