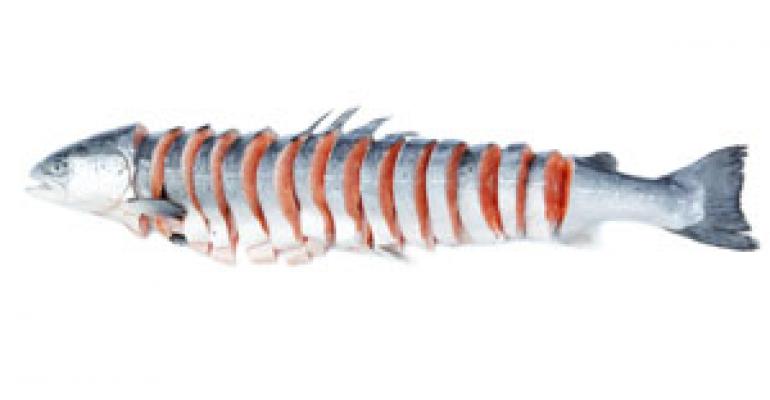 Restaurateurs express concern as FDA considers approval for the fish

Producers of genetically modified salmon might have difficulty finding acceptance in restaurants even if the U.S. Food and Drug Administration deems the fish fit for human consumption.

The FDA said a 60-day consultation period will begin Sept. 19 and include a series of public meetings as the agency decides whether to allow the fish to be sold as food. If it wins approval, the fish should be available by 2012.

Company material states that the fish is designed to be raised in contained, land-based facilities and that the fish are all sterile females, meaning that even if they escaped from their facilities they would not be able to cross-breed.

But many restaurant chefs said they wouldn’t serve the fish.

“There is no way I would be interested in serving [genetically modified] salmon,” said Chris Carriker, executive chef of The Gilt Club Restaurant in Portland, Ore. “The eventual damage to the environment would be catastrophic. Scientists say they have sterilized the GMO fish, but eventually one will adapt and destroy the natural process.”

“It sounds kind of weird,” he said of the fish. “We have people ask all the time where the food is from. I think customers want to know where the cheese or the pork or the mushrooms are coming from … I think with the big green movement over the past couple of years, they’d be against [genetically modified salmon].”

In a poll conducted on Wednesday and Thursday on the NRN blog Food Writer’s Diary, 26 out of 32 respondents, or 81 percent, said they would not eat the genetically modified salmon or serve it in their restaurant. Only two respondents said they would try the fish, and four said they might.

“It goes against my principles,” said Andy Arndt, executive chef of Aquariva Restaurant in Portland, Ore. He argued that the practice of genetically engineering fish wouldn't be necessary if fisheries were better regulated.

“I’m not interested in seeing ‘genetically altered’ anything in my restaurant,” said Antonio Bettencourt, chef-owner of 62 Restaurant & Wine Bar in Salem, Mass. “Local, fresh, honest, farm-to-table as much as possible is our mantra. I think people will pay the extra few cents to make sure they know where the food comes from. Maybe larger chain restaurants will have other thoughts, but that is my feeling.”

But Robert Okura, vice president for culinary development at Cheesecake Factory, wasn’t particularly supportive of the idea of genetically modified salmon either.

“I would assume that certain quality attributes like flavor, texture, etc., would be affected by the abbreviated time required for the salmon to mature. I could be totally off base with this … but until I personally saw, touched, cooked and tasted such a product, that is what I would be most apprehensive about.

“And then there’s the potential reaction from our restaurant guests,” Okura continued. “Regardless of the facts and/or whether or not the pros outweigh the cons, many of our guests oppose the notion of ‘farm raised’ versus ‘wild caught.’ When you hear the term ‘genetically altered,’ you can’t help but think that some weird science is involved, which to some, takes the mother nature cheating techniques of farm raising to a whole new level of disgust.”

“I don’t think that I would serve any genetically modified salmon at Eve,” said Troy Graves, chef at the Chicago restaurant. “I do believe that we need a sustainable way to farm-raise fish because the oceans cannot keep up with human consumption. [But] as soon as the government allows a corporation to patent a method of raising fish, there is a certain stranglehold on the fish supply in the future.”

Jonadab Silva, executive chef and co-owner of Jacky’s on Prairie in Evanston, Ill., argued that genetically modifying salmon was unnecessary.

“My opinion is we are looking at the whole issue in the wrong manner,” he said. “Instead of making salmon grow faster, why don’t we educate consumers to eat other varieties of fish, rather than just salmon, which is on every menu?”