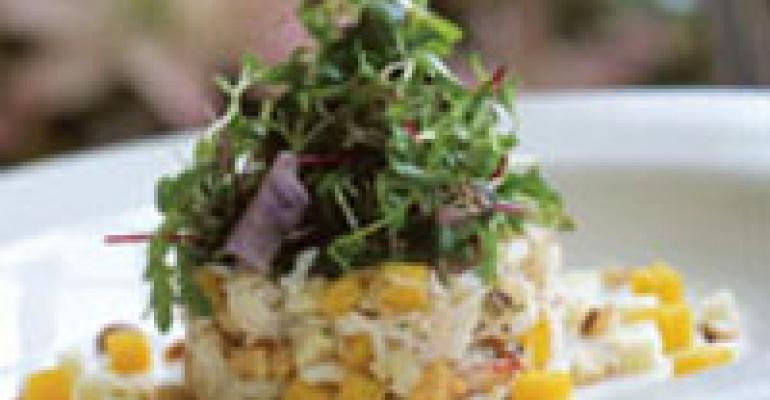 Chefs use a delicate touch with crabmeat appetizers

To put a virtuoso spin on a luxury ingredient without overwhelming its delicacy, some chefs walk a fine line with crab appetizers and first courses. Current menus show the likes of lightly breaded crab cakes, crispy pancakes laced with fancy crabmeat, crab-meat-and-fruit salads with tangy-sweet dressings, and puffy crabmeat beignets.

At the Atwood Café, an updated comfort-food restaurant in Chicago, executive chef Heather Terhune speaks for many of her peers when she says of her crab starter, “I like to let the crab flavor shine through.”

A case in point is her summertime salad of lump crabmeat, sliced heirloom tomatoes and grapefruit sections. The key to the dish is dressing the lump crabmeat lightly with sour cream—three tablespoons per pound of crabmeat is sufficient. Rounding out the plate are basil leaves and a drizzle of fresh grapefruit-juice vinaigrette.

“The tomatoes and the crab have a real affinity for each other,” Terhune said.

“Honestly, I don’t know how creative people want to be with a product so pricey,” said Vitaly Paley, chef-owner of Paley’s Place, a Pacific Northwest regional restaurant in Portland, Ore., where picked Dungeness crabmeat has sold for $15 to $17 per pound recently. “Often, I think they’re inclined to leave it alone.”

Paley’s creative take is Dungeness Crab Beignets. The restaurant sells 15 to 20 orders on a busy night, priced at $15 apiece. It’s a riff on New Orleans-style beignets, the fried pastries made from choux paste, the cooked mixture of water, butter and flour and eggs used for cream puffs. Paley mixes in the crabmeat, diced fennel and onions and deep-fries light, fluffy spheres. He serves them with microgreens and Green Goddess dipping sauce made from house-made mayonnaise and fresh herbs.

The item known simply as crab cakes at The Drawing Room, a 55-seat “culinary cocktail lounge” in Chicago, is an ensemble of four plump crabmeat-laced pancakes and novel vegetable nibbles, priced at $14.As executive chef Nick Lacasse cooks the bottom side of the pancake on a cast-iron griddle, he tucks lump crabmeat into the uncooked top side and protects it with shavings of salsify before flipping it. The mixture is actually a waffle batter and cooks up with a pleasing texture.

“For me, without that little crispy golden ring around a pancake, you’re lost,” he said.

Salsify also appears on the plate as caramelized chunks and quick-fried chips, along with curried cauliflower, Vermont maple ginger sauce and romanesco.

“People love the richness of a nice crab appetizer,” said J.R. Luna, executive chef of McCormick & Schmick’s in Chicago, part of the 76-unit, Portland, Ore.-based casual seafood chain. “It’s a good lunch, a good starter for hungry people.” He had a hit recently when he served a meaty six-ounce chilled king crab leg with a cocktail sauce enriched with crème fraiche, priced at $12.95.

At Nacional 27, a modern Latin restaurant in Chicago, executive chef-partner Randy Zweiban plays up the affinity between lump crabmeat and ripe papaya or mango in a salad lightly dressed with rice wine vinegar and sweet mirin.

“The acidity and the sweetness play off the crab and the papaya really well,” he said.

In addition, Zweiban warned of a common pitfall of crab cakes—excessive breading, a sure route to heaviness and muted flavor. That’s why he doesn’t bread the exterior of his popular Pan Roasted Blue Crab Cake appetizer. Instead, he binds the lump crab-meat with a small amount of Japanese panko crumbs, diced peppers and red onion, Creole mustard and mayonnaise.

“Compared to a crab cake breaded on the outside, I’m probably using one-sixth of the breading,” Zweiban noted.

Not reticent to combine crab with rich, hearty ingredients is the Palace Café in New Orleans. There, Crabmeat Cheesecake, the brainchild of managing partner Dickie Brennan, is an all-time-favorite signature starter. It’s a mixture of Louisiana blue crab-meat, caramelized onions, garlic, fresh thyme, cream cheese and eggs baked in a tartlet pan over a pecan crust, served in a wedge with wild mushroom sauté and Creole meuniere sauce, priced at $8.

“The slight bitterness of the artichoke counters the richness of the other ingredients,” said chef de cuisine Ben Thibodeaux. “It’s a real balancing act.”