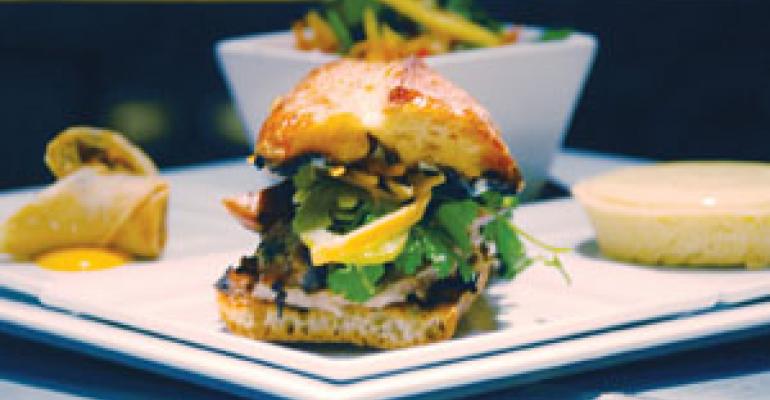 The high-priced degustation now has a modern, more democratic cousin: multicourse meals that offer variety, value and choice for less than $50. Thomas Keller, the renowned chef who has crafted $250 nine-course tasting menus at Per Se in New York and The French Laundry in Yountville, Calif., most recently has opened a restaurant that offers a $45-per-person prix-fixe menu. Ad Hoc, also located in Yountville, celebrated its first anniversary in September, even though it was initially conceived as only a six-month project. The success of the daily four-course menu—appetizer, protein with vegetable entrée, cheese course and dessert—led Ad Hoc’s management to extend service to seven nights per week. The set menu, which was not designed as a replacement for Keller’s high-end offerings, features such comfort foods as fried chicken.

According to Patricia Yeo of New York’s Monkey Bar, diners crave variety in a more casual, less expensive dining experience. Prix-fixe menus offer an opportunity for the customer to sample different flavors and enjoy the multicourse format in an affordable way.

Theo Gilbert, chef and owner of Terragusto in Chicago, agrees. He says that his restaurant’s multicourse, sharing philosophy translates his fine-dining background, cultivated at Chicago’s Spiaggia and Trattoria No. 10, into a more relaxed, quality experience.

Since opening Valentine’s Day 2006, Terragusto has offered customers a two-course or three-course option, where they build their own meal off the à la carte menu. For the three-course option, each customer pays between $35 and $37 for one appetizer and one pasta dish per person as well as one entrée protein to share with another person in their party. Gilbert says the menus encourage a different style of dining versus the “one giant bowl of pasta you get at other Italian restaurants.” The multicourse option allows his diners to share with others at the table and to sample many dishes.

For example, Maijean’s roast pork tenderloin with sweet-potato flan on the à la carte was re-envisioned into a grilled pork chop with mashed potatoes for the prix-fixe entrée course. The prix-fixe menu, first offered in August, was designed to grow early-dinner seatings and allow customers with less disposable income to enjoy the high-dining experience.

At Monkey Bar, Yeo has been serving her Asian-meets-American cuisine at the iconic New York haunt since June. For lunch, she serves up set menus at around $20 each. Diners have a choice of five bento boxes, each inspired by a different country’s flavors. Ranging from India to Vietnam to America, the bento boxes include two appetizers, a main dish and a bar cookie dessert served all at once.

“This format works well in New York,” Yeo says. “The climate is that the dining public is more casual. People go out to get something to eat and have fun, not for the dining experience, and the people who are interested in food want a lot of variety.”

Even though the bento box items are set—with exceptions generally only made for allergies or dietary restrictions—Yeo delivers choice through multiple types of menus, which, due to popularity, will expand to seven or eight options in the coming months. All courses are brought out at once, so the customer can decide how long to dine.

“It’s great because there is no time constraint,” Yeo says. “Everything comes at once, so it’s your prerogative how long you eat, might it be 30 minutes or three hours.”

Chefs also report that course items must be specifically tailored to the type of menu. At Monkey Bar, Yeo includes dishes that are served at room temperature because courses aren’t brought out individually. Room temperature dishes ensure that the taste and texture of the food doesn’t suffer from sitting out. Of the 20 items currently offered in the boxes, only two soups are served hot.

The “Mekong Bento,” includes a Vietnamese cold sandwich with chicken and pâté, a vegetable spring roll, a green papaya salad and a lemon bar. Yeo says while most dishes are cooked à la minute, she can prepare the green papaya salad ahead of time, since the salad doesn’t wilt and tastes best when allowed to macerate in the dressing. For a possible Japanese bento box, Yeo is considering a seaweed salad that also won’t wilt when dressed.

Similarly, at Terragusto the antipasti plate is popular for the appetizer course and well-suited for the family-style course menu because it’s perfect for sharing. The plate items rotate with the seasons but can feature buffalo mozzarella, farm-fresh eggs boiled and drizzled with olive oil, custom-cured and -smoked meats, and such salads as shaved zucchini, carrots, garlic and mint.

Yuki Ishiba, owner and manager of K-ZO in Culver City, Calif., says she tries not to include tastes that are too strong or unusual when deciding items for the prix-fixe courses. K-ZO’s two prix-fixe menus, offered since the restaurant opened in August 2006, showcase the head chef’s classical training in both French and Japanese cuisine. The smaller prix-fixe menu, the Bamboo menu at $48 per person, includes an hors d’oeuvre course, chef’s choice of sashimi salad, a cooked-meat entrée, three pieces of nigiri and a sushi roll, dessert, and hot tea or coffee.

Ishiba says she wouldn’t include fermented beans, because the traditional Japanese dish is somewhat unusual. The prix-fixe menus are designed for customers who are new to the flavors and ingredients and don’t know what to order. The aim is to introduce the menu without alienating newcomers.

High-end items like fatty tuna are only sometimes included in the larger Pine Tree prix-fixe menu at $68 per person. Ishiba says customers can always upgrade the prix-fixe menu at an additional cost to include daily specials on the regular menu, like foie gras.

Pinot Bistro in Studio City, Calif., offered a set three-course prix-fixe menu on Sunday nights for the last four to five years. In August they modified it so diners can choose their three courses from the entire menu. General manager Faiz Mattar says that since the bistro has given the customer choice in the prix-fixe menu, he has been seating more than 140 tables on Sunday versus the prior 70-table to 80-table average. Furthermore, 80 percent of people are ordering the prix-fixe menu on Sundays, compared with 30 percent previously, Mattar says.

At Pinot Bistro, items like oysters and filet mignon can’t be included on the prix-fixe menu. Mattar says they can only offer it on Sunday—deemed “Locals’ Night”—because the prix-fixe is not cost-effective. But the prix-fixe draws a regular crowd and that makes the program worthwhile, he says.

“It’s built for our loyal customers,” Mattar says. “The prix-fixe is popular because people are excited to sit a little longer in a restaurant of this caliber and taste more food. Also, it’s the great value.”

Terragusto’s Gilbert agrees that the course option cultivates trust with the customer.

In August, the 1,950-unit Applebee’s chain introduced Ultimate Trios, for which customers can pick three dishes out of seven to create their own sampler. Five of the Ultimate Trio options are completely new to the menu, including the Steak Quesadilla Towers and Dynamite Shrimp. Kristie Sigler, director of menu strategy for Overland Park, Kan.-based Applebee’s International Inc., says Applebee’s looks for ways to alter popular menu items that may not seem like a good fit for a combo. For example, Applebee’s offers miniature bacon cheeseburgers as an option for the Trios.

Applebee’s first presented a combo promotion, the Three Course Combos, in 2004 and has reintroduced it several times since then. The Pick ’N Pair lunch combo, first launched in February 2006, also has remained on the menu.

“Applebee’s is all about choice,” Sigler says. “Our guests like the flexibility of having choices and taking a safe adventure, trying something new without having to get the full entrée at regular price.”

K-ZO’s Ishiba, for example, says the prix-fixe can be difficult for servers. Since the entire table does not have to order it, Ishiba says it is challenging for the servers to time the courses. Furthermore, the prix-fixe dinner can be challenging for waitstaff because the sushi and hot food come from different sections—the sushi bar and the kitchen.

By contrast, management at Monkey Bar says the bento boxes reduce server labor. All the courses come out at once, so the servers make one trip to the table, instead of four. Furthermore, ordering is less complicated, and servers don’t have to time each course. The format cycles people through the restaurant faster during lunchtime.

Gilbert similarly asserts that the course option at Terragusto cuts down on ordering time because the customer orders all at once. The family-style course menu also saves on dishwashing. Each diner gets a plate and fork at the beginning of the meal, and all courses come out on platters to share between two diners. Because of the sampling nature of the experience, the servers don’t switch out plates and forks for each course.