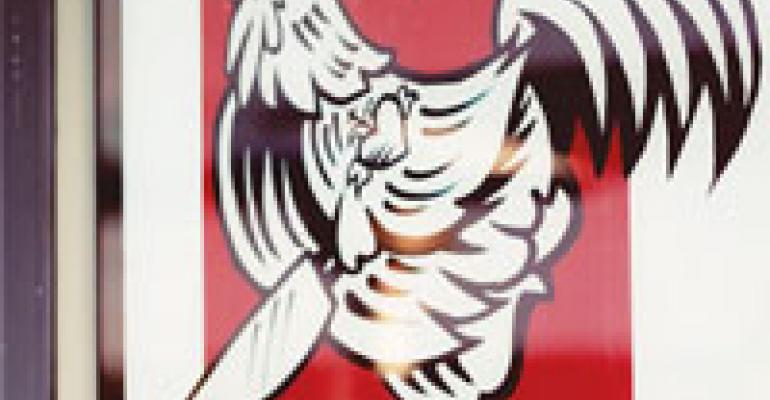 Ludovic Lefebvre’s wife Krissy likes to refer to her husband as “the chef with no restaurant who serves dinner five nights a week.”

Known in Los Angeles as the former chef at the now-defunct restaurants Bastide and L’Orangerie—both once among the city’s most high-end dining spots—Lefebvre is now carving out a niche for himself as a “pop-up” artist. Calling his new business “Ludo Bites,” Lefebvre is currently cooking dinners at the restaurant Breadbar in Los Angeles on Tuesday through Saturday nights.

Temporary cooking gigs have long helped chefs get by between jobs or earn some extra income at special events. But with the ongoing downturn in the economy, chefs across the country, like Lefebvre, are viewing the concept of a pop-up restaurant as a more permanent business model.

During the day, Breadbar is a bakery-cafe with a casual menu centered around the brand’s European-style breads. At night, when the cafe would typically close at 7 p.m., Lefebvre and his crew take over, with wife Krissy running the front-of-the-house.

After three months at Breadbar, however, Lefebvre hopes to take a month off and then start another three-month “pop-up” gig at a different location.

In San Francisco, the nightclub Bruno’s has opened up a private party space one night a week to a collection of chefs who host a serious night of dining amid the stripper poles. For this group, the pop-up arrangement gives them a chance to express their culinary creativity in a way not allowed by their day jobs.

In New York this summer, Tom Colicchio’s ‘Wichcraft has partnered with Southwest Airlines to operate a pop-up bar concept in Bryant Park. Officials there see it as an opportunity to extend their brand and capture the excitement of a seasonal get-in-now-before-it-ends event.

The concept of a pop-up restaurant falls somewhere between a guest-chef arrangement and catering. Pop-ups by nature are temporary, and chefs must be flexible with their staffing and able to adapt to borrowed spaces.

However, unlike catering, which requires paying for a kitchen, storage space and transportation, pop-up businesses allow chefs to be nimble. Overhead costs are low, and the ability to change locations can offer a fresh start if business turns sour.

Lefebvre, for example, has been offering Ludo Bites at Breadbar since 2007, before the chef left for Las Vegas for a few months to develop the menu at the nightclub Lavo at The Palazzo.

When he returned to Los Angeles, the French chef looked into opening his own restaurant, but, as wife Krissy said, “In this economy, who wants to try to raise a half a million to a million dollars?”

Ludo Bites, however, had been so successful, Lefebvre decided to develop it as a business.

Lefebvre worked out what he described as a “cost-sharing arrangement” with Breadbar owner Ali Chalabi. Ludo Bites supplies its own staff, and pays for workers compensation and liability policies separately.

Ludo Bites uses Breadbar’s kitchen, service ware and equipment, but supplies its own food. The restaurant does not have a liquor license, so guests can bring their own bottles.

Chalabi is pleased with the attention Ludo Bites brings to Breadbar. Most of Breadbar’s sales occur at breakfast and lunch, so Ludo Bites brings in a dinner crowd that Chalabi hopes will return for the early dayparts.

The arrangement has worked so well that Chalabi has launched a similar pop-up at a second Breadbar location in the Century City neighborhood of Los Angeles.

There, Breadbar consulting chef Noriyuki Sugie has designated one night per month for a “Hatchi”—the number eight in Japanese—series featuring eight small plates for eight dollars, each prepared by a guest chef. In June, the chef was Debbie Lee, a finalist on Food Network’s “The Next Food Network Star.”

“We always wanted Breadbar to be an open kitchen as a stage for talent,” Chalabi said. “There’s an exposure with all these chefs. They bring ideas, and the menu has evolved with their influence.”

Chris Kronner, former executive chef at the San Francisco restaurants Serpentine and The Slow Club, was doing some consulting work for the nightclub Bruno’s earlier this year when he decided to launch Good Evening Thursdays one night per week.

He joined forces with several friends who work at Chez Panisse and other area restaurants to create a dinner event open to the public with a menu that Kronner describes as “throwback American steakhouse.”

It’s run as a restaurant, said Kronner, “but throwing it once a week gives it the energy of a party.”

After three months, the Good Evening Thursdays are regularly doing about 100 covers per service in the 35-seat room. Bruno’s keeps proceeds from bar sales and the rest goes to the chefs and their staff.

“It’s not particularly profitable, but we break even,” Kronner said. “We really wanted to do it for the conceptual exercise. It’s a relatively low-stress environment to work with friends and do something different.”

There are challenges, Kronner noted. The group sources all of its own ingredients. Because of the temporary nature of the event, they can’t arrange for regular deliveries.

“It’s fine when you’re going to the farmers markets, but it’s not so fun to have to drive to Oakland to pick up chicken wings and fryer oil,” he said.

The event will probably end in the fall, but Kronner hopes to take the Good Evening events to another location.

“As soon as it starts to feel stale, it’s over,” he said.

Located in the southwest corner of the park, where ’Wichcraft operates a kiosk, the Porch was set up under a temporary pergola with outdoor lounge furniture and a bar. The space is open to the public on weeknight evenings and Southwest hosts special events on the weekends.

The limited menu was created by ’Wichcraft and features “sharable” sandwiches that reflect the routes where Southwest Airlines flies from New York. A Southwest Airlines representative is on hand at the Porch as an ambassador to “answer questions,” said Ortuzar.

Despite the weeks of rain drenching the city at the start of the venture, the Porch has had a great response, he said.

Though it wasn’t easy getting the necessary licenses and permits quickly in a city known for red tape, Ortuzar said the restaurant group is starting to consider other impermanent possibilities.

“It has created incremental business for us, but it also creates relationships that could lead to something else, and it brings in traffic,” he said.

“People get excited about things that are seasonal,” he added. “Hopefully, it’s not that our attention span is so short that we can only go to a restaurant that doesn’t last that long.” — [email protected]