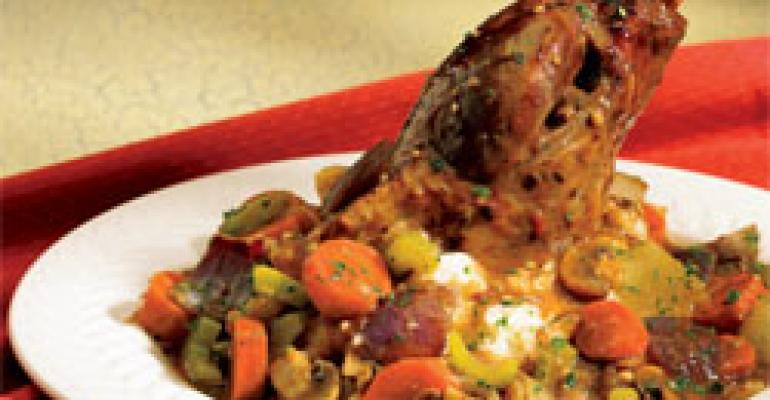 Chef Richard Rosendale of Rosendales in Columbus, Ohio, applies an extreme low-and-slow cooking method to lamb shoulder. He cooks four-pound shoulders confit style for 50 to 70 hours in vacuum-sealed bags with olive oil using an immersion circulator to heat a water bath to about 145 degrees Fahrenheit. The long-cooked shoulder meat is stuffed in a Spanish red pepper and served as an appetizer for $12.

Besides shoulders, braised cuts of lamb favored by chefs these days include economical necks, ribs and more pricey shanks that are all prized for their full flavor. According to Megan Wortman, marketing director for the American Lamb Board, chefs are now going beyond traditional preparations of lamb.

“Back in the day everybody was doing a rack of lamb with mint jelly on the side, but that has played out,” says chef Gerald Green of Garibaldi Restaurant in Savannah, Ga., who’s been a chef for 21 years. Lamb rack roasting “is something that people can do at home. I’m trying to do sauce that will take them a while to figure out.”

Green’s slow-roasted lamb ribs are seasoned with a Jamaican-style jerk rub, wrapped in foil and cooked at 300 degrees Fahrenheit for around two and a half hours. To serve the $9.75 appetizer, Green coats the cooked ribs with Asian soy-based sauce with cilantro, ginger and sweet Thai chili sauce, heats for a few minutes and plates six with pear-cabbage relish.

These are the only ribs at this Southern eatery. He chose lamb over pork ribs because they are different, Green says. “If you do a pork rib, I think people will be looking for a barbecue sauce.”

Besides the ribs, Green runs an occasional special of Tuscan style lamb osso buco with risotto and collard greens for $26.

“I really wanted to make affordable food,” she adds. The dish’s food cost is 27 percent, using shanks from the hindquarter.

She plates hunks of the braised meat with plan-tain chips, house-made pita that are grilled to order, and a quenelle of double-strained yogurt mixed with diced cucumbers, mint chiffonade and garlic confit vinaigrette.

“Since the opening in August, we’ve been though a lot of cooks,” Autry admits. “Not everyone wants to cook from scratch. So we all are crazy, but we have fun.”

In the fall, their $13.99 lamb is served on the bone with mashed potatoes. “It stands up very tall and proud,” Petrie says.

Slow-cooked shanks are sliced and served in a sandwich at Auntie Em’s Kitchen in Los Angeles. There chef-owner Terri Wahl pairs the meat with caramelized onions and blue cheese on ciabatta bread for a $10.95 lunch that comes with a salad. Wahl braises the lamb with sprigs of rosemary, garlic, onion, red wine and beef stock for around seven hours.

“Really low and really slow,” she says. “It gives it time to absorb the flavors.”

At Felidia in New York, chef Fortunato Nicotra replaces shank with lamb neck, but calls the dish osso buco. He says calling it an osso buco helps sell less familiar necks. And he further markets the braised lamb by serving it with seared lamb chops for a $38 main course.

The less expensive cut stretches the protein, Nicotra says. Chops these days would require a $50.00 entrée price, he adds. By serving them with the less expensive neck, it brings down the cost per portion.

He traditionally braises the neck in an Italian style with orange zest. He currently serves the lamb dish with mashed sweet potatoes and roasted root vegetables at Felidia.

Back at Rosendales, lamb neck has also been featured on a $185, six-course tasting menu. And like at Felidia, the neck may be served with a more common item like lamb loin. One application is a long-cooked lamb neck roll that is sliced, brushed with mustard and dipped in breadcrumbs, then sautéed to order.

“If you put lamb neck on the menu, it might scare people off,” says Rosendale, who’s captain of Culinary Team U.S.A., which is slated to compete in the 2008 culinary Olympics in Germany.

To quickly cook a lamb rack at service, Rosendale applies a low-and-slow prep method. He combines the deboned meat, basil leaves and cracked black pepper in a vacuum packed bag. He steams the “rib-eye” in a combination oven at 155 degrees Fahrenheit for about 25 minutes or until the internal temperature reaches 128 degrees Fahrenheit. Then the lamb is browned at service.

“It is below poaching temperature, so [par-cooking] doesn’t make it tough,” Rosendale says. “I believe that it comes out more tender and with more juice,” than if it was traditionally roasted.

Chef Paul Anders of Sweet Basil in Vail, Colo., goes to great lengths to make lamb bacon from the fat cap over a lamb rack. He brines it for a day, air-dries it for two days and smokes it for about two hours. Finally he braised the smoked cap with a fortified wine for about four and a half hours and then crisps it to order.

Anders highlights the “bacon” on a lamb tasting plate for $40 that he plans to introduce as the ski season picks up. The dish will also feature Colorado lamb rack and lamb shank in a turnip and celery root hash.

“We sell a lot of lamb,” Anders says. “People look forward to it when they come to Colorado. They see it as an indigenous product and relate to it.”

Tim Love is also featuring a tasting of lamb three ways–shank, chop and braised neck–for $25 at Duce, a Peruvian inspired steak house in Fort Worth, Texas.

“The neck is really the most flavorful and tender cut on the lamb,” Love says. “They hold their shape. Once the fork hits it, it just melts. Lamb neck is like beef short ribs. It is not something you cook at home very often. It’s different.”

But regardless of how unusual lamb may be for some people to prepare at home, many have become familiar with the protein when prepared by professionals. “People used to look at lamb like it was wild game,” Love adds. “It’s now more approachable.”