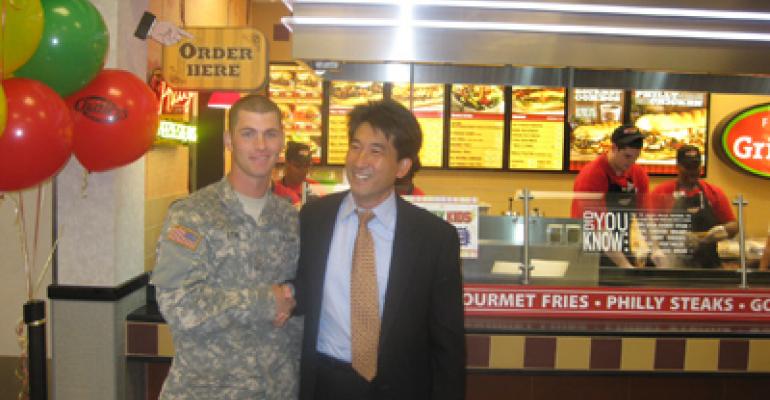 Charley’s Grilled Subs opened its 100th onsite restaurant at a military base this week through the Army-Air Force Exchange Service, or AAFES, and shows no signs of slowing growth, said chief operating officer Bob Wright.

With the opening of the unit at Joint Base Lewis-McChord near Seattle, Charley’s continued its 12-year partnership with AAFES. It is the second-largest brand in AAFES’s nearly $1 billion portfolio.

The Columbus, Ohio-based Charley’s, known for its Philly cheese steaks, has nearly a quarter of its restaurants on bases in the United States and around the world. The strategy aims to permit future growth in areas with an American military presence and beyond.

Long before Charley’s opened its first military-base unit in July 1999, the company sought to work with AAFES, Wright said. Not only did AAFES’ mission to serve American service members align with the Charley’s philanthropy-oriented values, but the brand’s cooked-to-order platform enabled growth primarily in onsite settings like mall and military-base food courts.

Charley’s partnership with the military has allowed it to gain a foothold in markets it had previously never entered, Wright said. It now has 440 units in 46 states and 15 foreign countries.

“A lot of people’s first exposure to us has been on bases around the world,” Wright said. “I’ve been on the line in a mall restaurant of ours, and a former service member will tell me that our brand was a taste of home when he was stationed in Germany or South Korea.”

Expansion with AAFES will continue at the pace of eight to 10 locations per year the partnership already produces, Wright said.

Charley’s also will look to expand internationally and in the United States by branching out beyond the bases into those markets. The chain is in discussions to add locations in Germany and South Korea, and has signed deals in Asia and Central and South America. The brand already has 16 units in the United Arab Emirates.

“We have a great chance to take advantage of expanding capitalism around the world and the consumerism that comes with it,” Wright said. “Even in a worldwide slow economy, there are growth opportunities.”

Charley’s also plans to start growing domestically in a more traditional sense with its Charley’s Philly Steaks prototype, a freestanding location with a full dining room and a drive-thru. The first such unit opened this year, with three more planned for 2011 and four for 2012.

As for base expansion, even if the U.S. military draws down its troop presence over the next several years in Iraq and Afghanistan, Charley’s Grilled Subs still will have room to grow through the AAFES partnership, Wright said.

“We remain flexible to their needs,” he said. “We already closed one AAFES unit this year in Kuwait, and that was because of troop movement. We’re still underserved in the larger military population. AAFES’s motto is that they go where the soldiers are, and we’ll grow where they grow.”