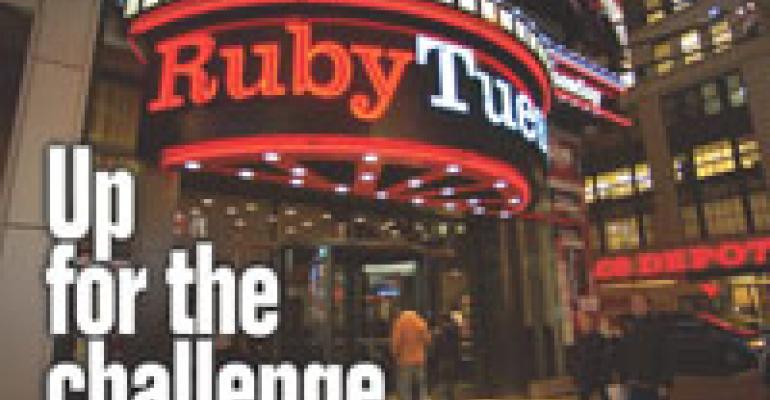 Up for the challenge

As domestic economic and competitive pressures grow, the casual-dining segment continues to face many challenges, and increasingly determined operators are rising to meet them.

Just as the past few years have been no cakewalk for casual-dining operators, so far 2008 looks stormy as well. As the times get tougher and talk of recession gets louder, operators are girding for a long haul of belt tightening even as they look for new avenues of growth.

Throughout the segment, operators are scrutinizing their operations and menus, seeking alternative venues for their products and continuing to look abroad for expansion—steps that should strengthen businesses in the long run, observers say.

“There’s a lot of grumbling,” says Kevin Moll, chief executive and president of National Restaurant Consultants Inc. in Denver. “No one is enamored with the outlook this year.… It’s enjoyable and challenging at the same time. Quality operators will survive through this. It’s a blip on the radar.”

Many casual-dining companies are reporting dismal earnings for the last half of 2007 and offer only cautious hope for this year. They continue to face the perfect storm of customers buffeted by the weak housing market and high food and gas prices as well as higher costs for both supplies and labor.

“This is obviously a very challenging time for Brinker and for the entire casual-dining industry,” Doug Brooks, chairman and chief executive of Dallas-based Brinker International Inc., said last month when his company announced earnings for the second quarter ended Dec. 26. Although the sale of several restaurants to a franchisee helped to boost second-quarter profit up 23 percent from the prior year to $54.5 million, revenues were down 4 percent to $868.2 million. Brinker, which has 1,872 casual restaurants under several brands, including its flagship Chili’s Grill & Bar chain, also had previously said that blended same-store sales had fallen 2.1 percent.

Competition from other segments is the chief challenge, Brooks noted at the time, saying, “Add to this the uncertainty about the economy, a decline in consumer confidence and increased commodity costs, and we are operating in one of the toughest environments in our company history.”

Industry observers agree that food costs are a sword of Damocles that hangs over the segment with the potential of drastically lopping profits.

“The wholesale costs of foods are projected to go up 5 percent this year,” Moll says. “That’s a huge hit. Most operators, broad brush, operate with a 10-percent margin, give or take a few percentage points. If wholesale food costs go up 5 percent, that’s a 50-percent hit straight on the bottom line. If you are not proactive on the menu and pricing, you are setting yourself up for a 50-percent hit on the profit. Shareholders understand sales trends, but they don’t understand a 50-percent cut in profit unnecessarily. You have to move now.”

The economic environment also is delaying Brinker’s plan to sell its 245-unit Romano’s Macaroni Grill chain, which the company said would be pushed into fiscal 2009, which starts mid-year.

“Negotiations and discussions are ongoing with multiple parties, and we’re still seeing continued interest,” said Charles Sonsteby, Brinker’s chief financial officer. “The current tightening of the credit market has resulted in a process that is taking a little longer than we had planned. While we remain hopeful we can complete the transaction by the close of the fiscal year, it’s still more likely to occur in early fiscal year 2009.”

Even as Brinker said it was pushing back the expected sale date of Macaroni Grill, several stock analysts in late January were beginning to show optimism about the futures of several casual-dining chains.

Although The Cheesecake Factory Inc. of Calabasas Hills, Calif., said its fourth-quarter 2007 earnings fell 35 percent and that it was cutting its planned openings next year, analysts were slightly sanguine.

Howard Penney, an analyst with Friedman, Billings, Ramsey, upgraded The Cheesecake Factory Inc. from “under-perform” to “market perform.” In a note to clients, he said the chain, which operates 123 Cheesecake Factory restaurants and eight Grand Lux Cafe units, might benefit from the tax rebate plan Congress is considering.

“With the current stimulus package and its tax rebates, which essentially puts more money in the consumer’s pocket, we would not be surprised to see a pickup in restaurant top-line trends,” Penney said.

Robert M. Derrington, an analyst with Morgan Keegan, cited the easing of monetary policy in his view that Darden Restaurants Inc., parent to the 650-unit www.redlobster.com Red Lobster and 600-unit Olive Garden chains, would outperform in 2008.

“While economic recoveries can be volatile and are seldom straight-line, we believe the Fed is putting in place an economic stimulus which will likely stave off a recession, assisting a recovery in consumer spending and ultimately positioning Darden Restaurants for better operating performance to come,” Derrington said.

In an effort to achieve that improvement, operators were reviewing both their facilities and operations.

Brooks noted that Brinker “must aggressively evaluate and perceive strategies designed to engage and delight our guests, differentiate our brands from the multitude of competitors across the dining industry, and reduce costs associated with opening and managing our restaurants.”

“The current reimage program at Chili’s has demonstrated progress in driving incremental traffic as guests return to the brand in fully remodeled and updated restaurants,” Brooks said. “This new, more contemporary take on our well-known brand is bringing guests back to Chili’s and proving successful in enhancing the overall dining atmosphere.

“The program targets older, solid-performing restaurants in need of a face-lift and is resulting in positive guest feedback and a boost in traffic. To date we have reimaged 62 Chili’s restaurants and early numbers show mid-single-digit growth in guest counts.”

“In the future our international business will become a significant and growing part of our overall profits,” he said.

Matthew DiFrisco of Thomas Weisel Partners said Brinker’s plans to dial back domestic expansion was a good sign and a “positive for the health of the segment.”

Ruby Tuesday Inc. of Maryville, Tenn., with more than 900 locations, recently announced plans to expand its airport locations by opening five new units to be developed by franchisee Areas USA Inc., a subsidiary of the Spanish restaurant, retail and hotel operator Areas S.A. One of the first airport units is planned for Orlando International Airport in Florida.

“We still have plenty of growth opportunities when it makes economic sense to do so,” Sandy Beall, chairman, president and chief executive of Ruby Tuesday, said in a statement.

“There are also the kiosks that aren’t technically branded as Chili’s Too, but are an extension of the brand,” said Brinker spokeswoman Stacey Calbert. “These are the sandwich/salad grab-and-go places. We’re fortunate that the Chili’s brand can be scaled up or down to serve our guests in a number of different ways.”

Grill Concepts Inc. of Los Angeles, which has 28 restaurants, recently announced that it would open a unit at the Westin Hotel at the Los Angeles airport as well as debut in February a new 400-square-foot fast-casual concept called In Short Order–Daily Grill in the Seattle Sheraton Hotel lobby to augment the company’s presence in the recently expanded 1,253-room Seattle Sheraton. A Daily Grill restaurant already serves breakfast, lunch and dinner, provides room service for the hotel guests, and services the hotel lobby lounge.

Casual-dining chains also are tweaking their menus to provide guests broader options and to provide value for the guests. P.F. Chang’s China Bistro Inc. of Scottsdale, Ariz., said it is rolling out its new grill menu and mini desserts to the 172-unit chain this month. The company had been testing the grill menu during the past year.

“There are a hundred components that go into quality purchasing, and each of those components needs to be examined,” he says. “There are often unique loyalties that exist in brands and vendors. Some key considerations include getting manufacturers to pitch in and promote and to offer maximum profit contributions to the buyers. Another component could be bulk buying when possible or other buying arrangements.

“You also have to eliminate slow-moving menu items.”