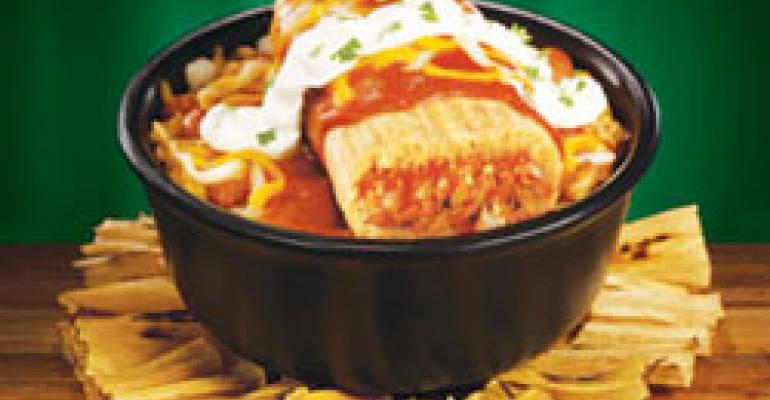 After testing Teriyaki Bowls in Western stores since late October, Jack in the Box officials last month revealed plans to roll out the lower-cost, high-margin menu item nationally by February next year.

Like other players in the quick-service segment, the San Diego-based chain is turning to the rice bowl as a versatile and filling menu option more dependent on rice and vegetables than protein at a time when beef and chicken prices are expected to continue rising. Popeyes Louisiana Kitchen and El Pollo Loco also have added new rice bowl options to their menus, and consultants say more chains are likely to follow suit.

In addition, rice bowl-centered concepts, such as Torrance, Calif.-based Yoshinoya America, are aggressively attempting to steal market share from their hamburger- and pizza-focused quick-service competitors by appealing to consumers’ growing interest in more healthful fare and increasing need to economize.

“Bowls are QSRs’ way of getting away from the Quarter Pounder or chicken sandwiches, which are heavy proteins,” said Dennis Lombardi, executive vice president of WD Partners in Columbus, Ohio. “It reminds me of [McDonald’s] Snack Wrap. Once it got successful, it got imitated. I expect bowls to do exactly the same thing.”

Just as wrap sandwiches had been around long before McDonald’s made them a quick-service staple, rice bowls also long have appeared on quick-service menus in various forms.

Jack in the Box first introduced a Teriyaki Bowl offering in 1993, which was a hit at the time. The item was dropped from the menu in 2003 as customer tastes changed, said officials at the 2,500-unit chain.

In October, Jack in the Box brought the item back, positioning the Teriyaki Bowls as a premium menu item.

“Our Teriyaki Bowls are a great addition to the nonhamburger alternatives on our menu and have lower-than-average food costs,” said Linda Lang, Jack in the Box Inc. chairman and chief executive. “We’ve been pleased by the initial reception to this unique product in the QSR segment and are looking forward to expanding them into our central U.S. and Southeast markets later in the fiscal year.”

Lombardi said Jack in the Box’s price positioning on the product is probably aimed at stealing back market share that has been lost to competitors in the fast-casual segment.

“It’s a value for the money,” Lombardi said, “but it’s probably not aimed at people who are dollar- and penny-conscious.”

Earlier this year, rice was among the commodities that saw record price increases, but prices have dropped back to prior-year levels, and operators say they are expecting even more favorable rice prices in 2009.

In addition to the margin potential, rice bowl items appeal to consumers as a more healthful quick-service option, which is an important consideration as an increasing number of menu-labeling mandates go into effect in 2009. Jack in the Box’s Teriyaki Bowls have 580 to 650 calories, compared with 1,070 calories for a sirloin cheeseburger.

Irvine, Calif.-based El Pollo Loco was one of the first Mexican quick-service chains to pioneer a rice bowl menu item with its Pollo Bowls first introduced about 15 years ago. Now the Pollo Bowl makes up about 8 percent of sales, officials said.

El Pollo Loco frequently uses additional rice bowls as limited-time offers, like the current Chicken Tamale Bowl introduced Nov. 3 and available through the holidays at most of the chain’s 411 stores. For a recommended $4.99, the bowl has a chicken tamale covered with Colorado chili sauce over rice and beans, topped with shredded Cheddar and Jack cheeses.

“It fits the needs consumers have today,” he said. “Pollo Bowls are a more healthful offering, and they’re a way for consumers to get a hearty meal at a great value.”

That’s a message Yoshinoya America hopes consumers recognize. The growing 90-unit chain’s menu is centered on rice bowls, and so far this year Yoshinoya America is one of few brands reporting positive same-store sales, though officials declined to offer specifics.

The chain’s signature beef bowl and related combo items make up about 62 percent of menu sales.

Scot Hobert, Yoshinoya America’s vice president of franchise development and sales, said the deal aims to compete with the growing number of $5 meal deals currently available throughout the segment.

In addition, to compete against the pizza segment, Yoshinoya is offering a “Feast Deal,” with chicken or beef, vegetables, and rice to feed up to five people for a recommended $21.95.

While many franchise brands are cutting back on growth plans, Yoshinoya America continues to grow, with 17 new stores scheduled to open in 2009, including seven company-owned locations. The company’s goal is to add 50 new stores over the next three years.