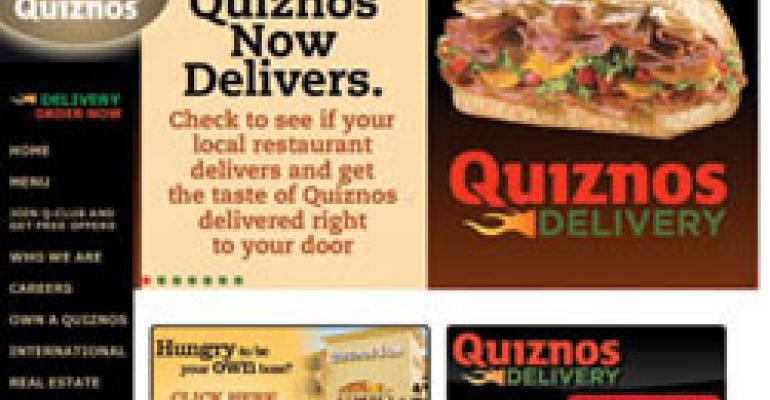 Chains focus on delivering messages as well as food

Restaurants seeking to find different ways to target consumers inevitably turn to new media, but a few chains have hit the road to reach consumers with an old standby: delivery service.

Offering delivery isn’t exactly a revolutionary idea—Domino’s Pizza built a reputation on it. But chains that have never tried it before are finding that adding a strong service element to the marketing mix can attract new customers and generate sales.

Quiznos, The Cheesecake Factory, Subway and El Pollo Loco are either testing delivery or expanding efforts in that area to reach consumers who desire a restaurant meal but want the convenience of eating it at home.

That doesn’t mean they’re making lunch or dinner from scratch, he added. They’re getting it from Whole Foods or other supermarkets and from restaurants, which makes delivery service “almost a necessity” for chains that want to tap into those households, Tristano said.

He pointed to the success of sandwich chain Jimmy John’s in Champaign, Ill., whose marketing efforts emphasize its speedy delivery, even if the order is for only one sandwich.

The chain has grown to nearly 700 units since its founding in 1983 and is “doing really well” with delivery sales, Tristano said.

The Milford, Conn.-based Subway recently partnered with Universal Delivery Solutions to begin delivery service in the greater Boston area. Earlier this year, Subway and the company began testing delivery in New York. The chain is studying how well delivery is working to determine whether it should be offered in other markets.

The Cheesecake Factory, the casual-dinnerhouse chain based in Calabasas Hills, Calif., has expanded delivery to offset customer-traffic declines. Delivery is being offered in 62 restaurants in 13 markets. Service could be expanded to half of the chain’s 143 units where third-party delivery companies are available, according to chairman and chief executive David Overton. During an earnings call with analysts, he said the units offering delivery are “doing well.”

“We are definitely happy that we are doing it,” he told analysts.

El Pollo Loco in Costa Mesa, Calif., began limited delivery in Los Angeles this summer in response to consumer demand for convenience and as a new way to generate sales.

That’s also why Denver-based Quiznos Sub, with about 5,000 U.S. restaurants, has been offering delivery in about half of its units.

“There’s a huge market for this,” said Rebecca Steinfort, senior vice president of delivery and catering. “It’s pretty clear to us that consumers want delivery.”

The chain began offering delivery last summer on orders of $8 or more for a $2 fee. Units with delivery service report that customer traffic is up and “sales are growing really nicely,” Steinfort said.

“Because the whole service uses the infrastructure already in the stores, it’s extremely profitable,” she said.

Customers can order online, by phone or by fax. Quiznos’ goal is to become the first sub-sandwich chain to offer delivery nationwide, Steinfort said.

Quiznos has not advertised its delivery, promoting it only on the local level, through e-mail and on its website. This fall, however, the chain will test different media to see which works best to generate delivery sales. During 2009, when Quiznos expects to offer delivery systemwide, it plans to tout the service in its brand advertising, Steinfort said.

“We think that will provide another huge lift for the business,” she said.

Because there is so much precedent to follow, starting a delivery operation “is not as hard as you think,” Steinfort said.

“We haven’t been the first to figure this out,” she said. “The pizza chains have paved the ground. We’re very fortunate that we get to go to school on what they learned.”

Although delivery appeals to consumers who want to save money by driving less, Steinfort said, Quiznos doesn’t expect delivery sales to decline if gas prices continue to fall. Regardless of how much gas costs, “people love convenience,” she said.

Delivery is just one tactic to boost sales, but “that’s the best one for us,” Steinfort continued. She doesn’t expect “everyone will do it” because other chains will pursue what fits best with their brand assets, whether it’s focusing on breakfast, drive-thru or late night.

“Each restaurant company will make a choice, given who they are,” she said.

But it makes a lot of sense for a sandwich chain to offer delivery, based on consumer eating habits, said Harry Balzer, vice president of The NPD Group, a Port Washington, N.Y.-based consumer market-research firm.

Growth in the foodservice industry has come from takeout meals for the last five or six years as in-restaurant dining has declined from the growth rates seen in the 1970s, 1980s and 1990s, he said.

“Five years from now people will be eating most of their meals in home,” Balzer predicted, and it would be “prudent” for all restaurants to consider the home market as another way to provide foodservice.

Delivery does have its challenges, though. Food quality, delivery time, accurate delivery and liability issues all have to be considered, Balzer said. Since delivery is “not a novel idea,” its value depends on whether a restaurant can deliver a product that customers previously have not been able to get through delivery.

“There’s nothing like success to breed imitation,” he said.