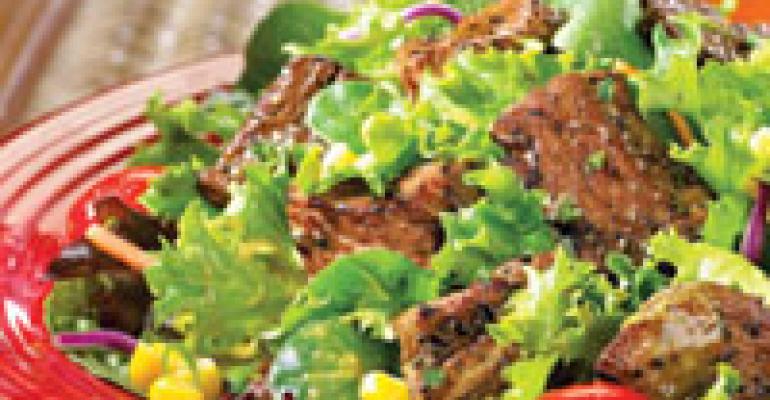 CARROLLTON TEXAS T.G.I. Friday’s president and chief executive, recalls that people in the industry thought “we were nuts” when the chain began offering smaller portions at lower prices a year ago. —Richard Snead,

At the time, Snead admitted the idea of possibly reducing check averages with no guarantee of increasing traffic was “kind of scary.” —Richard Snead,

Earlier this month, however, Snead declared that the chain’s “Right Portion, Right Price” platform has been wildly successful, and he said it now is a permanent fixture on the menu of the more than 600 U.S. locations of T.G.I. Friday’s, based here. —Richard Snead,

With consumers now keeping tight grips on their wallets, casual-dining operators see smaller portions at lower prices as a way to maintain profitability on each plate while preventing greater numbers of regular customers from trading down to fast-casual and quick-service alternatives. —Richard Snead,

T.G.I. Friday’s Right Portion, Right Price initiative has resulted in an increase in the chain’s average check because guests tend to order more appetizers and dessert, officials said. Over the past year, up to 15 percent of sales per month have been attributed to the Right-sized items. —Richard Snead,

“A year ago, the industry thought we were nuts when we announced smaller portions at lower prices across the menu, all day, every day,” Snead said. “Providing value and choices is our business. T.G.I. Friday’s was the first to take a broad position on portion size, and it’s a leadership position we won’t relinquish.” —Richard Snead,

With the addition of three new “Right Portion, Right Price” menu items, Friday’s now offers 11 such dishes, ranging in price from $5.99 to $9.99, including low-fat and low-carbohydrate options. —Richard Snead,

Among the new choices are a 6-ounce petite sirloin with a side of white-cheddar-jalapeño macaroni and cheese; and Italian sausage and chicken over penne pasta tossed with creamy roasted-red-pepper sauce, sautéed red onions and Parmesan cheese shavings. —Richard Snead,

When T.G.I. Friday’s started the program last year, Snead said consumers were no longer interested in buying more than they could eat and bringing home leftovers. —Richard Snead,

Now, he said, the selling point is the offering of choice. —Richard Snead,

A recent Harris Interactive survey for T.G.I. Friday’s found that 82 percent of U.S. adults prefer to dine at a restaurant that offers a choice of portion sizes. —Richard Snead,

“Our guests may select an entrée because it’s at a more attractive price point,” he said. “Or they may decide the smaller portion is the right amount of food. They key for us is to make sure our guests have those choices.” —Richard Snead,

At a time when commodity prices are soaring, however, the smaller-portion aspect allows operators to shave their food costs significantly while building traffic. That was one motivation for 125-unit Mimi’s Cafe, based in Tustin, Calif., and owned by Columbus, Ohio-based Bob Evans Farms Inc. —Richard Snead,

Mimi’s Cafe rolled out a “Just Enough Lunch” section to the menu May 1, which will be followed by the addition of “Just Enough Dinner” options later this month. —Richard Snead,

At lunch, eight smaller-portion items, including dishes such as Parmesan-crusted chicken breast, meat loaf or pasta jambalaya, range from $7.99 to $8.99. —Richard Snead,

At dinner, among seven options will be dishes such as pasta primavera with chicken, salmon with asparagus or chicken Salisbury steak, ranging from $8.29 to $10.99. —Richard Snead,

At the same time, the chain also is rolling out a new menu emphasizing seasonal dishes to better convey the concept’s brand image for fresh and healthful food. —Richard Snead,

The goal is to “boost frequency among our existing customer base,” said Tim Pulido, Mimi’s Cafe’s president. “It’s a value play, but it’s also what our customers want.” —Richard Snead,

About two-thirds of the chain’s guests are women, and many fall into an older demographic that wants smaller portions, he said. —Richard Snead,

The benefit for the chain is not only reduced cost per plate but also faster speed of service, Pulido said. —Richard Snead,

“These dishes have a faster turnaround than larger portions” and other menu items, he said. —Richard Snead,

Known for offering generous plates of food, Lucille’s for the first time is offering half-portion salads, for example. Other dishes don’t emphasize the smaller-portion aspect, such as the $7.95 order of three mini pulled-pork sliders. —Richard Snead,

Lucille’s president Craig Hofman said the new portion-price options are meant to slow eroding traffic counts at a time when guests might choose their dining spots based on their strained budgets rather than their taste buds. —Richard Snead,

“This way, people can stay at the concept they like to go to and spend a little less money and not trade down,” Hofman said. —Richard Snead,

Management of The Cheesecake Factory, based in Calabasas Hills, Calif., believes its offerings of smaller-portion, less-expensive items at lunch have boosted sales partly because guests opting for them are less likely to share, said Howard Gordon, the chain’s senior vice president of business development and marketing. —Richard Snead,

“What we were hearing from our guests at lunch is that people didn’t want to take food back to the office and put it in the fridge,” he said. —Richard Snead,

Other than small salads available all day, The Cheesecake Factory has no plans at this point to offer smaller-portion, lower-price items at dinner, when more than 80 percent of guests take leftovers home for another meal later. —Richard Snead,

The take-home portions at dinner are “a big part of our value position,” Gordon said. —Richard Snead,