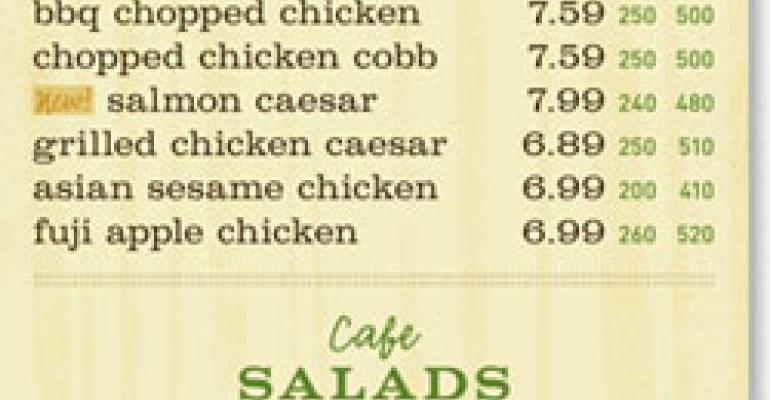 Chain restaurants across the country with 20 or more units will soon be required to post calories on menus and menu boards under federal law, but Panera Bread didn’t want to wait.

Calorie-counting guests can walk into any of the 1,388-unit bakery-cafe chain’s nearly 600 company-operated stores and choose between a Mediterranean Salmon Salad with 540 calories and a Fuji Apple Chicken Salad with 520 calories. Corporate locations completed the calorie-posting rollout in April, and franchisees are expected to follow suit by the fall.

Some might see the voluntary move as jumping the gun. The U.S. Food and Drug Administration has yet to determine the rules for the federal menu-labeling mandate, adopted earlier this year as part of the massive health care overhaul.

It’s possible the FDA will require that calorie information be posted in a larger font size or placed on a different spot on menu boards, and Panera will be forced to revamp its menus again once the rules are enforced, likely at the end of 2011 or early 2012.

Panera officials, however, said they hope to influence the FDA as it develops the rules over the next year.

“We felt we had developed a good model and thought it might be something they’ll take a look at,” said Scott Davis, chief concept officer of the Richmond Heights, Mo.-based company.

Across the country, chain operators say they have their own ideas about how they would like the rules for menu labeling to play out. The rules are expected by March 2011.

After years of balking at the notion of being required to disclose nutrition information on menus and menu boards, many in the industry now appear to be embracing the idea.

In places such as New York City, where calorie postings are already required, most restaurant chains say their consumers appreciate it, the cost is minimal and—though calorie postings may cause guests to move around the menu a bit—bottom-line sales are not adversely impacted.

Panera has been testing calorie postings on menu boards for about two years with much positive feedback, Davis said.

With the move, Panera officials tweaked some recipes to improve their nutritional profiles, he noted.

“We didn’t want to have anything on the menu over 1,000 calories, and that’s harder than it sounds,” Davis said.

The Italian combo sandwich is the only item that goes over, at 1,040 calories. But most entrées are well below, in the 500 to 700 range.

“In New York City, some of our stores have very cluttered signs, and we’ve been trying to design them in a way that makes sense,” he said.

McIntyre said Domino’s would like to see the FDA allow them to use printed brochures in stores that direct customers to the website, which offers a nutrition calculator.

“It’s something that wouldn’t take a lot of space or cost franchisees a lot of money,” he said.

He noted that 90 percent of Domino’s sales are made off-premise via phone or online, so menu boards are only seen by about 10 percent of customers.

Some franchisees have discussed the option of removing their menu boards altogether.

Roger Berkowitz, president and chief executive of Boston-based Legal Sea Foods, would like to see more information disclosed on menus, such as portion sizes of proteins so guests can see how similar dishes vary in calories because of size.

Operators in California—where the second stage of a statewide menu-labeling mandate goes into effect in January 2011—are not sure what is expected of them next year. The federal law pre-empts all local legislation, but the timing of pre-emption has not been established by regulators.

“Will we then have to comply with the federal law months later?” Carley said. “We’re not clear on that.”

Louisville, Ky.-based Yum! Brands Inc. in 2008 announced plans to post calories in domestic locations of its Pizza Hut, KFC and Taco Bell chains. The goal was to have calorie counts on menu boards by January 2011, but now the company is waiting for the “what and when” from the FDA, officials said.—[email protected]