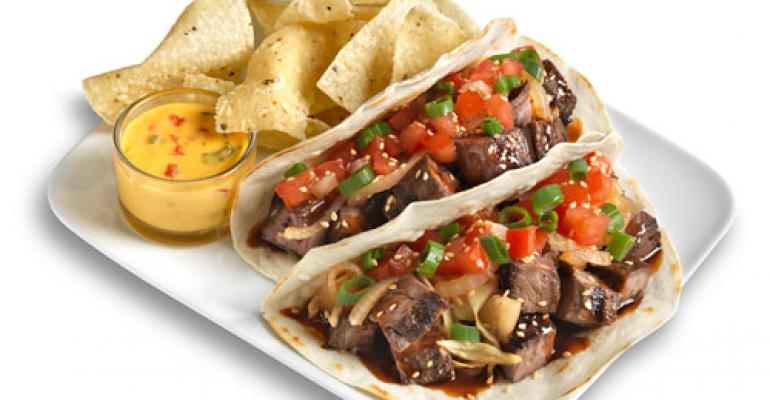 California Tortilla is the latest restaurant to embrace the Korean barbecue trend with its new limited-time offers.

The Rockville, Md.-based fast-casual chain of 37 units rolled out tacos made with the chain’s signature marinated skirt steak, Korean barbecue sauce, spicy kimchi-style slaw, fresh salsa, toasted sesame seeds and chopped scallions. The tacos are priced at two for $5.99, or in a combo with chips, cheese sauce and a drink for $7.99.

The ingredients also may be used in 14-ounce small burritos, $6.19, or in 19-ounce regular burritos and 17-ounce, tortilla-free burrito bowls, both for $6.99, said Stacey Kane, director of marketing.

“Our chef has been testing it for three months but it has been on the drawing board for a year,” Kane said of corporate chef and vice president of operations Keith Goldman. “Keith’s inspiration was the allure of the food truck and the trendiness of the bulgogi [Korean for “fire meat]. We wanted to add a fast-casual spin on it.”

She said the Korean-inspired offer would be available for two to three months. The pricing of the LTO tacos is “slightly higher than normal and the Korean burritos and bowls fall on the higher end of our burritos [price range],” she added.

To spur trial of the new items, California Tortilla posted a coupon for a free Korean taco on its Facebook page that is redeemable on Jan. 12.

Though it bills itself as a “Cal-Mex” chain, California Tortilla’s other recent limited-time offers included a Philly Cheesesteak burrito.

Cal Tortilla, as the chain is sometimes known, has created its spicy limited time offer amid the continued proliferation of Korean, Chinese and other non-Mexican “taco” food trucks that was sparked three years ago by the strong public response to the Kogi BBQ truck in Los Angeles.

“The Korean taco — an only-in-America synthesis of Korean-style fillings and a Mexican format — signals the rise of Korean barbecue and Korean food in general,” foodservice research firm Technomic Inc. of Chicago wrote in a recent report about 11 trends to watch in 2011.

Baja Fresh, a 250-unit fast-casual chain based in Cypress, Calif., has offered Korean variations of its tacos at a next-generation prototype restaurant in Irvine, Calif. In addition, the chain’s chief executive David Kim and other investors acquired the Calbi Fusion Tacos and Burritos food truck operation, which offers Korean food, for the purposes of franchising.

Other chains besides Mexican-food-focused concepts have experimented with Korean barbecue as well, including the 1,300-unit Panda Express. The Rosemead, Calif.-based quick-service chain introduced Kobari Beef dish last fall flavored with a sauce meant to evoke the sweet, smoky and spicy flavors of Korean barbecue.