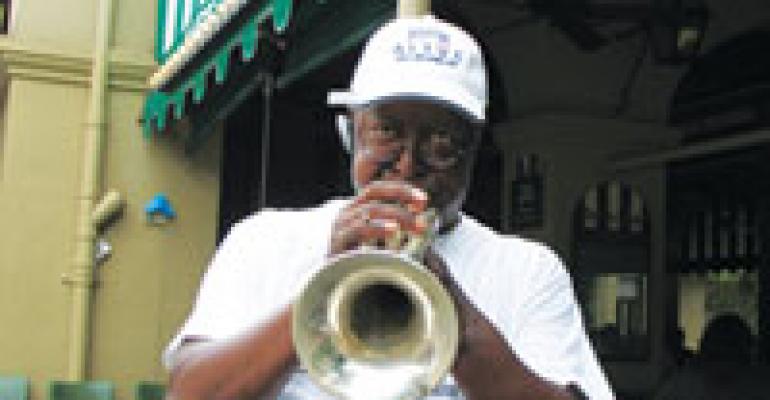 Just three items — coffee, beignets and milk — have kept Café Du Monde a must-see, must-sip destination in New Orleans for nearly a century and half.

Sandwiched in the French Market between the French Quarter’s Jackson Square and the levees of the Mississippi River, the 400-seat Café Du Monde endures because of its simplicity.

“There’s only one food item on the menu, and that’s the beignet,” said Burt Benrud, vice president of the parent company, H.N. Fernandez Inc. “We have to keep the menu simple because of the sheer volume.”

Café Du Monde is open 24 hours a day, seven days a week, and only closes on Christmas Day or when “the occasional hurricane blows through,” Benrud added.

While there are 26 licensed Café Du Monde units in Japan and nine throughout metropolitan New Orleans, the original French Market location is the one that has lines out the door.

To the strains of New Orleans jazz by street musicians, who play for tips, customers sip on chicory-laced coffee and square donut-like beignets dusted with a polar ice cap of powdered sugar. In the late 1980s, juices, soft drinks and iced coffees were added to the menu to entice even more guests, who often line up dozens deep to wait for tables, and listen to the jazz and the sounds of ship horns from the river.

“We’ve always been cognizant that there’s a value there,” he said. A coffee, three beignets and tip total less than $5 – a modest price for a rich taste of New Orleans history.

“Like so much of New Orleans’ culinary culture, the beignet is part of New Orleans’ French ancestry,” said Ann R. Tuennerman, founder of the annual “Tales of the Cocktail” conference. “Among the first beignet recipes published in New Orleans (under the name ‘doughnut’) is the one found in ‘The Creole Cookbook,’ dating to 1885. This demonstrates the long history of beignets in New Orleans.

“There is really nothing more New Orleans than a cafe au lait and beignets at Cafe Du Monde,” Tuennerman said. “Generations of locals and visitors have enjoyed making the trip to Cafe Du Monde for this authentic New Orleans experience. I remember after Katrina when Cafe Du Monde re-opened a huge comforting sign to all on the side of the building that said ‘Beignets Are Back.’ “

Katrina led to the longest closure of Café Du Monde since its founding in 1862. It closed at midnight on Aug. 27, 2005, and reopened nearly two months later on Oct. 18.

“The French Market is built on the highest part of New Orleans,” Benrud said. “It’s the city market that dates back to when the Indians populated this area. We didn’t get any water in our location. But our equipment, which is used to running 24 hours a day, decided it wanted to go on permanent vacation. We had to replace a lot of control valves in the kitchen equipment.”

The café has been under the same ownership since 1942, when Hubert Fernandez bought the enterprise, which was just across Decatur Street from his Fernandez Wine Cellar. Fernandez, who had been an employee of the banana-importing United Fruit Co. in Honduras, had settled in New Orleans, the company’s headquarters city, for the birth of his first daughter. The third generation of the Fernandez family is now running the operation, and the company intends to embrace the fourth generation as well, Benrud said.

“We feel we have a responsibility to our customers and to New Orleans,” he said.