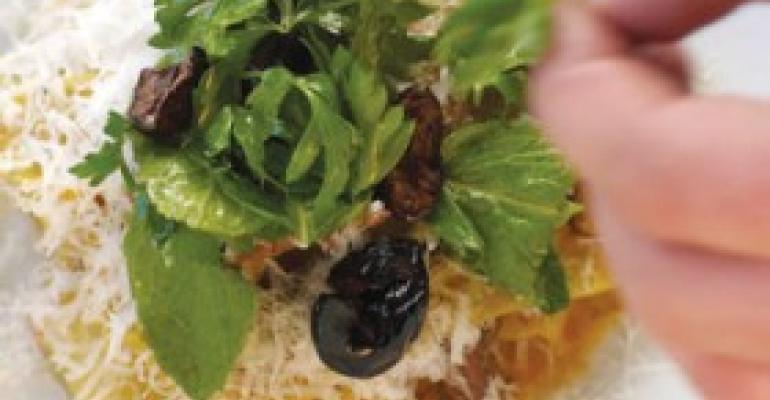 Eight 300-pound pigs were delivered to the kitchen cooler at The Little Nell Hotel in Aspen, Colo., a month ago. They came from the slaughterhouse dead but whole, with their skin and hair intact.

“I unloaded them into the cooler and my butcher looked at me and said, ‘You have got to be out of your friggin’ mind,’” says Little Nell’s executive chef Ryan Hardy, who raised the pigs. Before chefs could make bacon and prosciutto, the hair would have to be removed.

“We had to shave it off with knives,” says Hardy. “We’ll actually burn the hair off the pig we butchered yesterday, which is the way it’s traditionally done.”

Hardy is among those chefs who are taking the local food movement a step further by buying their own land and growing their own ingredients, considerably shortening the route from earth to mouth. At Blue Hill at Stone Barns, located 45 minutes outside Manhattan, ingredients go from the “farm to the kitchen without obstacle or delay.” The distance is counted in minutes, not miles.

“A lot of chefs have little herb gardens behind the restaurant that might be four or five rows,” says Hardy, who makes pasta using eggs harvested on his farm, and serves it with mint, olives and greens. “But the next big jump is really buying some land and saying ‘Okay, we’re going to do this a little bigger.’” The goal, he says, is not to harvest a cup of chives, but rather to grow enough produce to supply the kitchen.

“If you’ve ever had fresh celery as opposed to what you buy in the store, then you know the difference,” Hardy says.

It’s not just happening in temperate California. Hardy bought his 25 acres in Crawford, Colo., in 2007. Tom Douglas of Seattle’s Dahlia Lounge bought 20 acres in Prosser, Wash., in 2006. A little over two years ago, chef Dan Barber and his brother, David, owners of Blue Hill in Manhattan and Blue Hill at Stone Barns in Pocantico Hills, N.Y., began the process of reviving 140 acres of their grandmother’s 300-acre Blue Hill Farm in West Barrington, Mass.

They aren’t the first to take on the dual roles of chef and farmer. The original owners of Bern’s in Tampa started their farm in the 1970s. Executive chef Melissa Kelly’s four acres were planted in 2000, the same year her restaurant Primo opened in Rockland, Maine. Eberhard Müller, executive chef of Bayard’s, an event space in downtown Manhattan, and his wife, Paulette Satur, have been supplying his venue and other restaurants from their farm on Long Island in New York since 1997. And now more are getting into the act.

“Other restaurants are calling me to look into having their own farms,” says Rick Martinez, owner of a Tampa based consulting firm, Organic Integrity. Martinez runs the Sweetwater Organic Community Farm and manages the farm owned by David Laxer, owner of Bern’s Steak House and SideBerns.

“Most of our cooks come out of culinary school and are into the local organic movement,” adds Primo’s Kelly. “A lot seem to be getting more vocal about wanting to open a restaurant and have a farm or a garden.”

Some chefs are farming because they aren’t satisfied with the quality or price of organic or locally grown food. Others want a deeper connection with the land and the superior taste created when food is harvested and served in minutes. Many are interested in saving small farms and are forming fair-market contracts with a single operator. Most say their farms will not be the sole supplier to their restaurants.

In Seattle, Douglas has seen the price of organic produce skyrocket as more consumers seek out organic food suppliers. He’s dropped a few things from his menu because he can’t buy some ingredients at price points that make a plate profitable. A few months ago, for example, Douglas was shocked by the cost of two organic chickens: $27 each. That’s one of the reasons he bought property in Washington’s wine country.

“I’m going to pick a crop that has a price point that’s up there, and we’ll see if we can compete with what’s on the market,” says Douglas, who is getting the farm ready to start supplying his restaurants in 2009.

Each chef’s situation is a bit different and many economic models are being employed. Douglas bought the land himself, while Hardy formed a partnership with friends. In addition to finding a farmer to run their Blue Hill Farm, Dan and David Barber are better known for their affiliation with David Rockefeller’s nonprofit Stone Barns Center for Food and Agriculture, which is the location of their second restaurant.

“It’s a common misconception that we’re growing our own there, but that’s not the case,” says David Barber, who manages the financial side of the restaurant operations. “We are the primary tenant and primary customer of the farm. We buy from the farm at fair market value.”

David Kinch, executive chef of Manresa in Los Gatos, Calif., doesn’t own Love Apple Farm, but he still considers it his. His exclusive partnership with Cynthia Sandberg is entering its third year. Kinch, who visits the farm twice a week and who participates in the biodynamic farm’s chores, doesn’t pay fair market value for the produce but instead pays a fixed price plus labor.

“Nine months out of the year, 100 percent of all the produce in the restaurant is grown ourselves,” he says.

Adding a farm to a restaurant’s operations is an ambitious project fraught with challenges, the chefs say. An experienced farm manager is a must. And so is planning, which is necessary to determine how much should be grown as well as what to do when you have too much Swiss chard and not enough onions, for example.

Chef Edward Lee of 610 Magnolia in Louisville, Ky., jumped at the chance to farm with waitress Mindy Wiseman, who purchased a six-acre farm, but they after two years.

“We weren’t able to get the yields we wanted on some things; sometimes the produce was too abundant, or too scarce,” he says. “It was costing us money to have produce come in and we couldn’t use it all so it got to be messy really fast.

“When it all comes down to it, I’m a chef not a farmer,” he adds. “Managing a farm is so different than managing a restaurant.”

Kinch says adding a farm to his operation “has been my single greatest inspiration in 15 years, and it’s the hardest thing we’ve ever done.” Chefs need to be flexible, creative and able to think differently, he says.

“Now instead of the restaurant writing the menu, the garden is writing the menu,” Kinch says. Rather than creating a dish featuring an eggplant and then trying to find one, the chef looks at what was harvested that day and creates dishes using what’s available.”

For example, his menu includes a salad called the vegetable garden, prepared with some 30 crops from Love Apple Farm.

“It’s a completely different perspective, and it forces you to think in a lot of different ways that a lot of chefs aren’t used to,” he says. “It’s a huge challenge, but very gratifying.”

“Produce from farms doesn’t come in small quantities,” says Little Nell’s Hardy. “I tell our farmers that we’ll take as many as they need to sell, even if its 800 pounds of peaches. When it happens, we go out and buy the jars and say we’re going to make peach jam, peach chutney, peach mustard, and we’ll put peaches on the menu and blow through them in a week. You have to have that flexibility and creativity to roll with the punches and seasons.”

Adds Dan Barber, “When it’s tomato time, it’s impossible to get in and out of Blue Hill without eating a tomato. They’re in every course, dessert included.”