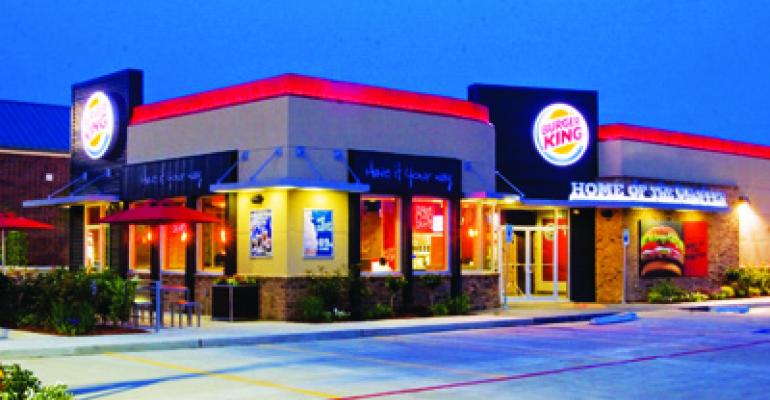 Burger King’s first commercial since deposing The King has been well-received by consumers, but the chain’s campaign marks only the first step in a long road toward turning around customer perception and chain sales, according to research firm YouGov BrandIndex.

The New York-based firm uses its “impression score” to gauge consumers’ general perceptions of the thousands of brands it tracks. It compiles the metric by polling 5,000 consumers in the United States each weekday, asking them, “Do you have a generally favorable impression of this brand,” and subtracting negative responses from positive ones.

The score is a moving average of that daily tally, ranging from positive 100 to negative 100, with a score of zero denoting a neutral perception from consumers.

Ted Marzilli, senior vice president for BrandIndex, said Burger King’s ads for the California Whopper, which focused on food quality rather than a corporate mascot, could help the chain garner incremental visits from consumers who had not considered the brand for a while.

“Burger King is trying to take a different tack, reinvigorate the brand, and get some additional folks into their stores at the margin,” Marzilli said.

The new ads replace the bizarre humor and The King mascot with a tight focus on the food.

“The ads are quite good, I think, because they show the flames and the BK logo right up front, which reminds people about the flame broiling, which always made them different,” he said.

Miami-based Burger King has been wrestling with declining same-store sales lately. Its new marketing, along with several new product introductions, is fueling part of the chain’s efforts to reverse the slide.

Burger King’s BrandIndex impression score on Aug. 17, three days before it debuted its latest commercial, was 24.4, half of McDonald’s score of 48.9 and even less than half of Wendy’s score of 51.6.

However, during the first three weeks of the campaign, Burger King’s scores climbed steadily. As the food-focused commercial ran on TV, BK’s score rose to a peak of 45.1 on Aug. 30 and ended the three-week period with a 38.4 score on Sept. 9.

During that time, McDonald’s scores peaked at 51.0 in late August but dipped slightly below Burger King’s the first week of September. McDonald’s finished the period with scores leveling out near Burger King’s, ending with a low of 34.8 Sept. 9.

Wendy’s impression score was highest of the big three burger chains every day in BrandIndex’s study, rising to a high of 66.3 on Aug. 25, hitting a low of 44.5 on Sept. 7, and ending the period two days later at 52.9.

Marzilli noted that Burger King’s gain in impression scores was not a zero-sum result of McDonald’s loss.

“These fluctuations in scores can happen,” Marzilli said. “Burger King has something fresh in the market, and people are talking about it, but McDonald’s is always on the air. Not every McDonald’s campaign gets put under the microscope. But Burger King is getting a lot of attention because it’s a new campaign with a new agency, and it’s hitting all the right notes.”

Marzilli said the food-shot-focused ads for Burger King’s new sandwich have driven consumers’ perceptions of the brand’s quality up slightly. Yet he noted that in-store execution of menu items, rather than just the promise of higher quality, is a better indicator of whether Burger King could convert those good feelings into sustainable sales.

Burger King’s move to advertise the California Whopper, a new menu item with premium touches like guacamole, comes at a time when competition for upscale burgers is fierce at the largest quick-service chains and from “better burger” upstarts.

Wendy’s launched its Dave’s Hot ‘N Juicy Cheeseburger with a national ad campaign Monday, while Carl’s Jr. and Hardee’s are introducing their Steakhouse Burgers this week. The Angus Third Pounder line of premium burgers has contributed to McDonald’s prolonged same-store sales success since its launch in 2009.

Burger King’s sales have decreased in the midst of a major transition to a new private owner, 3G Capital, as well as changes in marketing strategy and an ongoing menu overhaul. For its second quarter ended June 30, Burger King’s same-store sales in North America fell 5.3 percent.

Marzilli said that while Burger King has much work to do to turn around its sales — and is not likely ever to reach parity in the number of locations or the level of advertising spending with McDonald’s — the brand is off to the right start with the new ads.

“Impression scores are an early indicator you need to turn to improve your sales,” he said. “Down the road could only be a couple of months [for sales improvement]. The nice thing for Burger King is that the sales cycle in quick service is pretty quick.”