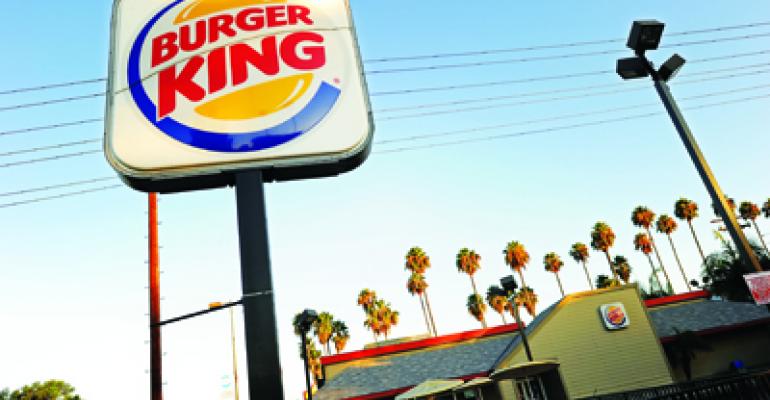 Burger King expects North American same-store sales to turn positive in the first quarter of 2012, as it gains momentum after “a year marked by change and meaningful improvements,” company officials said Thursday.

The parent to the Miami-based quick-service chain reported Wednesday a return to profit in the fourth quarter, as transaction costs eased after completing one year under new owner 3G Capital Management, which took Burger King private in October 2010.

Same-store sales in North America turned positive in the second half of the fourth quarter and were expected to stay positive into 2012, he said.

In the United States, the company credited upgrades in its kids’ meals, its new-and-improved fries, and buy-one get-one Whopper promotions during the quarter.

Restaurants in Latin America and the Caribbean are leading Burger King’s turnaround. Same-store sales there climbed 9.7 percent in the fourth quarter.

Same-store sales in Europe, the Middle East and Africa, or EMEA, grew 7.3 percent.

Burger King saw costs rise 9.6 percent in 2011, largely due to commodity inflation. The outlook for 2012 is roughly 4.1 percent.

Calling 2011 a “pivotal year” for the brand, Schwartz listed the chain’s achievements over the past 12 months:

• A global restructuring has resulted in $107.2 million in general and administrative expense savings, and the company has instituted a more meritocratic culture of “fiscal responsibility.”

• A refinancing of debt in February resulted in $32 million in savings on interest payments.

• New marketing efforts with food-centric advertising have boosted the chain’s appeal to a broader demographic.

• Operations have been restructured to increase the company’s field presence, and the chain has tied compensation rates more closely with restaurant performance.

About 236 restaurants have been remodeled under the plan as of December, and about 1,000 franchisees have signed up to complete the refresh within 12–18 months.

Schwartz said units that have completed the remodeling have seen double-digit sales increases.

• Burger King opened another 27 locations in Brazil under a new master franchise agreement there. The company is planning to continue its aggressive international growth with an eye for new strategic partnerships in nations like Russia and China.

In 2011, Burger King added a net 117 new restaurants, all in international locations, for a total of 12,512 units globally. About 45 units were refranchised last year, more than half of which were in the United States.