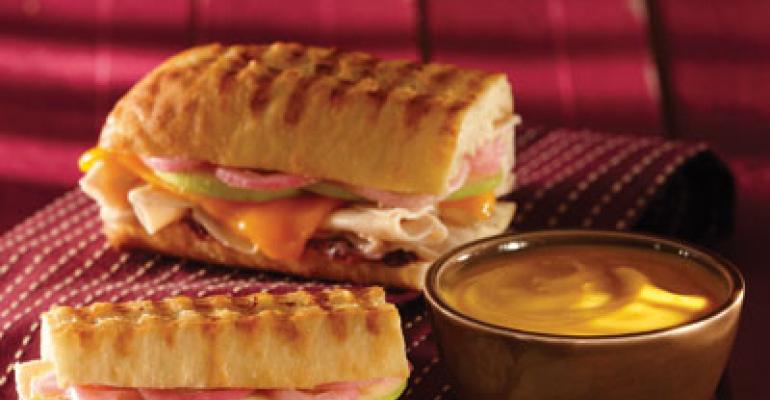 Bruegger’s has added a turkey sandwich to its ciabatta panini line for the fall and is bringing back its value menu.

The Harvest Turkey Ciabatta Panini is made with roasted turkey, Cheddar cheese, sliced green apples, pickled red onions and cranberry mayonnaise. It is paired with butternut squash soup for $6.99 until January 2012.

Burlington, Vt.-based Bruegger’s also is bringing back its “4 under $4” menu, which includes Western Egg; Egg and Cheddar; Egg, Cheddar and Bacon; and Egg White and Sundried Tomato sandwiches, each for less than $4. The sandwiches, whose prices may vary among locations, are available all day.

In addition, Bruegger’s is promoting its latest “Baker’s Choice” pairing. Selected by the chain’s executive chef, Philip Smith, the special is a baked apple bagel with honey walnut cream cheese and pumpkin spice coffee, available through Nov. 22. It replaces the honey grain bagel with plain yogurt cream cheese spread and Perfect Peach iced coffee that was offered during the summer.

Bruegger’s began testing its ciabatta panini line this summer as a limited-time offer. It also recently gave them away during a social media-based test in the Minneapolis-St. Paul area.