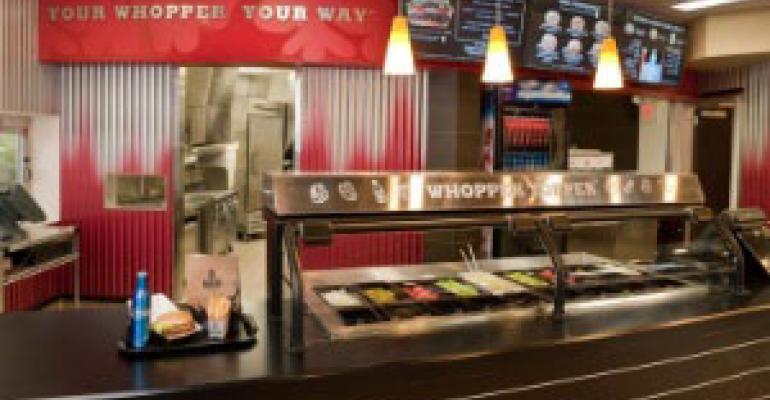 MIAMI BEACH Fla. Burger King said it will sell beer at a Whopper Bar set to open next month in Miami Beach.

In a domestic first for the nation's No. 2 burger chain, the new Whopper Bar will serve beer from 8 a.m. to 5 a.m. in the store and from 8 a.m. to midnight on the 46-seat landscaped patio, the company said. Whopper Bars in Singapore and Venezuela serve beer, as do Burger King units in Germany.

The new Whopper Bar, which will be located at Washington Avenue and 11th Street, will offer four Anheuser-Busch and MillerCoors brands in aluminum bottles for $4.25 each.

The unit will be open 24 hours a day, seven days a week, with the patio offering the chain’s first walk-up window for to-go orders. Delivery service via moped also will be offered.

“Burger King Corp.’s development strategy for the Whopper Bar involves carefully targeting marquee locations that often serve as consumer destinations,” said Chuck Fallon, president for Burger King in North America. “Not only is South Beach in our backyard, but the warm weather, famous nightlife and colorful personality of the destination make it a great fit for a Whopper Bar restaurant.”

The company said in a statement Friday that it was looking at New York, Las Vegas, Los Angeles and Malaga, Spain, as possible destinations for future Whopper Bars. It added that venues could include airports and sports arenas.

Burger King said it has no plans to add beer to its traditional burger restaurants.

"Beer is an available option unique to the Whopper Bar concept," a spokeswoman said. "However, each location is evaluated on a case-by-case basis, and the inclusion of beer on the menu is determined by location and the overall profile of each restaurant. It was a perfect fit for this particular location in South Beach."

She said the adult beverage addition to Whopper Bar "elevates the premium, bar-like feel that is expected of this complementary restaurant concept."

Earlier this week, Burger King opened its first restaurant in Russia, in Moscow’s Metropolis shopping mall. A second Burger King unit is to open in Moscow mall by the end of the month.

In the past five years, Burger King has entered the Eastern European countries of Bulgaria, Czech Republic, Hungary, Poland and Romania.

“More than 80 percent of our net restaurant growth is realized in international markets and we are pleased with our new strategic market entry into Russia and its future expansion potential,” said John W. Chidsey, chairman and chief executive officer of Burger King.

The Russia units are being developed by Burger Rus LLC, whose managing shareholder is Alexander Kolobov, founder of the Shokoladnitsa coffee shop chain in Russia. Kolobov’s partners in Burger Rus are Oleg Gurkov and Mikhail Serdtsev.

Burger Kings owns and franchises more than more than 12,000 restaurants in more than 70 countries and U.S. territories.