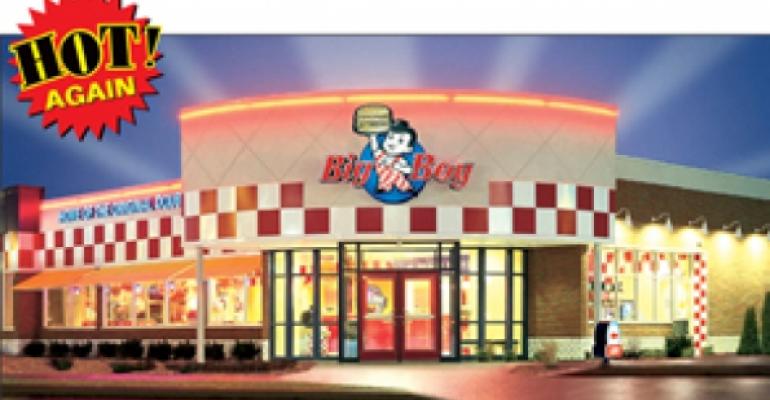 For being more than 70 years old, Big Boy is looking pretty good.

The pudgy, pompadoured, checked-overall-clad mascot certainly has been through a lot: huge popularity, bankruptcy, a makeover and even a trip through outer space with Austin Powers’ nemesis, Dr. Evil.

After all of that, however, the iconic Big Boy still has a big smile on his face.

Michaels took over the role of chief executive in 1999, a year before the company’s former owner Elias Brothers filed for Chapter 11 bankruptcy. Since then, he has helped restore Big Boy to growth mode under the ownership of investor Robert Liggett Jr.

The brand owner currently owns 28 branches of the family-restaurant chain, which specializes in double-decker burgers. It also is franchisor of approximately 150 others. The company also has a licensing agreement for Japan with multiconcept operator The Zensho Group, which runs 113 Big Boy restaurants in that country, according to the group’s website.

Frisch’s Big Boy, a separately run company, owns the rights to 115 Big Boys in Indiana, Kentucky and parts of Ohio and Tennessee. In addition to being operator or franchisor of those outlets, at the end of its fiscal 2007 Frisch’s was franchisee owner of 34 Golden Corral restaurants.

Warren, Mich.-based Big Boy International “has been under new ownership for six years,” Michaels says. “The plan was to make it great.… If you make it great, you’ll be able to grow it. That’s the platform we’ve stayed on.”

In looking to Big Boy’s future, Michaels says, the company also has looked back to its beginnings and the high standards valued by founder Bob Wian, who died in 1992, decades after expanding his concept nationwide and lending his name to the chain’s longtime identity as Bob’s Big Boy in its Southern California home market.

Wian opened Bob’s Pantry in Glendale, Calif., in 1936. There he developed the double-decker hamburger, which became the restaurant’s signature menu item. It was also there where he met his inspiration for Big Boy when a chubby, young boy came into the store.

“He was about 6, and rolls of fat protruded where his shirt and pants were designed to meet,” the Big Boy website quotes Wian as saying. “I was so amused by the youngster—jolly, healthy looking and obviously a lover of good things to eat —I called him Big Boy.”

Over the next 30 years, Wian grew the Big Boy concept through a franchise program that allowed franchisees a certain amount of flexibility to customize their restaurants, including the name. Among the major early franchisees were Dave Frisch, Alex Schoenbaum of Shoney’s and Elias Brothers. Of those, only Frisch’s Big Boy remains.

“It comes back to Bob Wian himself as an entrepreneur,” says foodservice consultant Malcolm Knapp, president of Malcolm M. Knapp Inc. of New York and a former Frisch’s Big Boy board member. “I think he valued the ability to be an entrepreneur. Certain things were sacred, like the image of Big Boy and the hamburger. But he allowed a lot more variety. He felt that, as entrepreneurs, they should adjust [the concept] to the local markets.”

In 1967, Wian sold Big Boy, then about 600 units strong, to Marriott Corp. However, Big Boy suffered under the new ownership and lost many franchisees. Elias Brothers Corp., then a franchisee, acquired the rights to Big Boy from Marriott in 1987, but the chain continued to struggle.

“[Elias Brothers] had made some ill-advised purchases and so on in some states,” says Michaels, who was head of marketing at the company before being promoted to chief executive. “The company got into some financial trouble.”

Elias Brothers filed for bankruptcy in 2000, and the company’s assets were purchased by investor Liggett, a Detroit media mogul.

Michaels’ plan to turn around Big Boy included improving the food and developing a new look for the restaurants. He says the company examined all the menu items and made several changes, which ranged from upgrading the lettuce in the chain’s popular Slim Jim sandwich to overhauling the recipe for the meatloaf.

A new restaurant design emerged in 2003, when Big Boy introduced a prototype unit in Grand Rapids, Mich., that featured a more open layout with such retro touches as an old-fashioned soda fountain.

A newer prototype debuted in 2005 in Madison Heights, Mich. The unit is owned by longtime franchisee Chuck Darany, who bought his original restaurant in Madison Heights from his father 20 years ago. When the city approached him about selling the lot, where the restaurant had been in operation for about 35 years, to make way for a shopping development, Darany says he was tempted to quit the business until he saw plans for the prototype.

“I could have taken the money and run,” he says, “but I thought, ‘Boy, this is going to be exciting.’”

He built the new restaurant about a block away from the site of the old one. Customer response has been positive, Darany says, and he attributes that to both the sharper design and an improved back-of-the-house that allows for more efficient service.

“It’s a combination of both the look that’s cool and the ability to get people in and out quickly because of the state-of-the-art kitchen design,” Darany says.

Michaels says the aspects of the new design —which he describes as “brighter, lighter and more colorful” —are being incorporated into older restaurants. About 70 percent of the older units have had some work done, he says.

Michaels says restaurants that have opened with the new design have “substantially higher” annual unit volumes, around $2.3 million, than do most older units, which trend around $1.3 million.

Strong dinner business will help Big Boy continue to succeed in the competitive family segment, predicts Knapp. He points out that family-dining operators typically excel in the morning daypart and are weaker at lunch and dinner. Being known for its double-decker hamburgers gives Big Boy an advantage in the effort to grab more dinner business, he says.

“Burgers are just basic to the American cuisine,” Knapp says. “They’re not going out of business or style.”

Michaels says Big Boy still has big plans, including growth in California and such Southeastern markets as Florida, Georgia and the Carolinas. He adds that the company has contracts for 110 additional units over the next several years.

Big Boy also is in talks to add a unit in a sports arena outside Michigan, Michaels says. The chain already has outposts at major sports venues in Detroit, including the homes of the Lions, the Pistons and the Tigers professional sports teams.

Units in airports and along major highways are being discussed, and a smaller version of Big Boy is in the works, he adds.

“We’re represented by a character that smiles 24 hours a day. How can you beat that?” Michaels says. “He’s the thread that ties everything together.