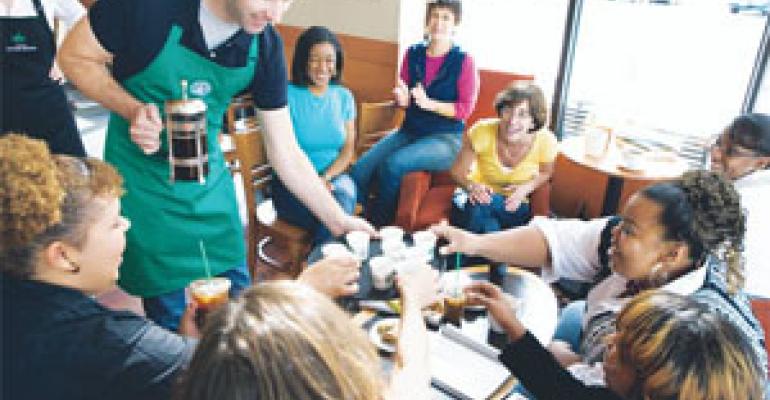 Despite consumers’ abiding attraction to indulgent sweets and specialty drinks, the industry’s leading beverage and snack chains are proving not to be immune to economic and competitive pressures.

The segment has witnessed changes in leadership, store closings and struggling franchisees, but top brands in the category intend to drive sales by positioning their concepts as offering the best value for cash-strapped consumers who have been spending less in the face of higher costs of living, especially for gasoline.

“From a value perspective, we are well positioned to weather the storm,” says Scott Hudler, senior director of brand marketing for Dunkin’ Donuts, the Canton, Mass.-based franchisor that currently boasts more than 5,700 U.S. doughnut shops and more than 2,000 overseas. “We’re viewed by consumers as a high-quality, high-value player.”

Dunkin’ Donuts helps drive that perception by offering occasional one-day deals, such as a 99-cent latte in February, a free iced coffee in May, and a free doughnut with the purchase of a medium coffee on April 15 for deadline filers of income tax returns.

“These have been good events to drive traffic to our stores and remind consumers we feel their pain as well in these current economic times,” Hudler says, adding that Dunkin’ Donuts’ goal is to keep such promotions as occasional rather than weekly or everyday features.

Even Seattle-based Starbucks Coffee Co., which rarely plays the discounting game, gave away 8-ounce pours this spring of its new Pike’s Place Roast, a brewed blend characterized as having a smoother taste.

“Price promotions have not typically been part of the makeup of our marketing, but we recognize that for customers right now, like everyone else, money is tight with things going on in the economy,” says Brady Brewer, vice president of marketing strategy and promotions for Starbucks, whose chain has more than 16,000 units worldwide.

The coffee chain recently began its Starbucks Card Rewards program, which ties special offers to reloadable swipe cards. Customers who load at least $5 on a card and begin using it in the chain’s coffeehouses become eligible for such rewards as complimentary syrup and milk additions to drinks, free refills on hot or iced brewed coffee or two consecutive hours of free wireless Internet access at corporate Starbucks outlets.

Special promotions and discounts are another sign of the highly competitive nature of the snack market, which is also going head-to-head against quick-service operators, according to restaurant analyst and consultant Bob Sandelman of Sandelman & Associates, based in San Clemente, Calif.

“Years ago you didn’t think of snacks and treats competing with major fast-food chains,” he says. “Now we see more crossing of the lines. Consumers will go from one to another for variety, convenience and whatever they crave on that occasion. There is less brand loyalty.”

Fast-food chains such as McDonald’s are offering premium coffee and specialty drinks. And in return, snack category operators are rolling out more items to compete with fast feeders beyond just the breakfast day part.

With the addition of new high-powered ovens that can toast items in minutes, Dunkin’ Donuts has begun offering flatbread sandwiches as well as personal pizzas and hash browns.

“We want consumers to think of us when making that decision on where to go for coffee or baked goods, and now flatbreads, pizza and hash browns,” Hudler says.

Operators in the snack category clearly are trying to improve customer traffic so they can improve sales without having to raise prices, industry veterans observe.

“There are three ways a business can raise sales: acquire new customers, get current customers to buy more often or raise prices,” says John Moore, a former marketing manager for Starbucks and Whole Foods, who is the founder of Brand Autopsy Marketing Practice in Austin, Texas.

“Now, they cannot raise prices,” Moore says. “They hope they can maintain current customers and get them to come back as much as in the past. But there are a lot of places where even the current customer is no longer coming in two days a week or six times a week.”

Jamba Juice, a first-time qualifier for Top 100 ranking this year, in February added breakfast offerings to its menu in an effort to reverse a sales slump. The more than 700-unit smoothie-centric chain based in Emeryville, Calif., trimmed 53 corporate staff positions earlier this year, closed 10 underperforming units and announced plans to slow down unit growth.

The menu additions quickly impacted sales, Jamba Inc. chief executive Paul Clayton has indicated, citing a growth in breakfast sales to 21.3 percent of total volume for the quarter ended April 22, versus 18.6 percent a year earlier. Among the new breakfast offerings are granola-topped smoothies, baked goods and a chunky smoothie eaten with a spoon.

Snack operators are trying to entice customers with more treats and special drinks.

Cold Stone Creamery, the Scottsdale, Ariz.-based chain of more than 1,300 ice cream outlets, has added a line of lowfat, low-calorie smoothies from NRgize Lifestyle Café. NRgize is one of about 14 concepts of franchisor Kahala-Cold Stone.

Cold Stone Creamery also was expected to begin offering a tart-tasting yogurt in June that has no fat and only 25 calories per ounce.

“This allows us to capture a totally different audience,” says brand president Dan Beem. “We get pigeon-holed with our indulgent lines. Our intent is to increase repeat visits with our core consumers who are also looking for a healthy line [of menu items].”

Baskin-Robbins, the more than 5,700-unit chain, including more than 2,700 U.S. shops, recently rolled out a new line of soft-serve ice cream at more than 1,000 stores in California, New York, Illinois, Texas and Tennessee. Baskin-Robbins is the sister chain of Dunkin Donuts—both are owned by Dunkin Brands Inc. Last December the franchisor shed its sandwich chain, Togo’s, and reorganized its management structure to combine its domestic and international units. At the time, Dunkin’ Brands president Jon Luther said the company was preparing to aggressively grow both of its remaining two concepts.

Management upheaval has occurred among other leaders in the snack category. In January, Daryl Brewster resigned from his post as president and chief executive of Krispy Kreme Doughnuts Inc., the Winston-Salem, N.C.-based chain that has struggled financially for the past few years. Two of its largest franchisees went bankrupt.

Brewster had been on the job for less than two years. He was replaced by James Morgan, who had been a member of Krispy Kreme’s board since 2000 and was elected in 2005, following Scott Livengood’s resignation that year.

Thanks to larger international sales growth, Krispy Kreme reported net income of $4 million for the first quarter, ended May 4, compared with a loss of $7.4 million in the same quarter a year earlier.

The chain added 27 more stores overseas, but closed six U.S. outlets in the latest quarter. Half of its units now are located abroad, and the company warned that “significant” numbers of domestic closings are expected in the future.

Starbucks chairman Howard Schultz reprised his role as president and chief executive starting last January, replacing Jim Donald, who resigned the post after three years. Starbucks had reported a decline in domestic same-store transactions in the fourth quarter of 2007, the first decline since the company started reporting same-store figures in 2004. The coffee chain also announced plans to shutter about 100 underperforming stores and scale back its growth plans this year.

Schultz has vowed to refocus the company on the characteristics that had made it a strong brand by enhancing the customer experience.

The chain’s new Pike’s Place Roast, named after the location of Starbucks’ original store in Seattle’s Pike’s Place Market, is an example of the company returning to its roots, Brewer says.

The chain has put renewed emphasis on some of its specialty drinks, such as the Americano, and on new automated French-press brewing systems. Starbucks purchased a boutique manufacturer of the Clover French press machines, and said an eventual rollout of that machine would enable a major stride in the upgrading of brewed-coffee signatures.

“We’re going back to our core of what makes this a compelling place for our customers to go,” Brewer says. “I’ve been with the company for seven years and I’ve never seen us so passionate about coffee. Our focus is totally centered on being the best cup of coffee a person can possibly get.”