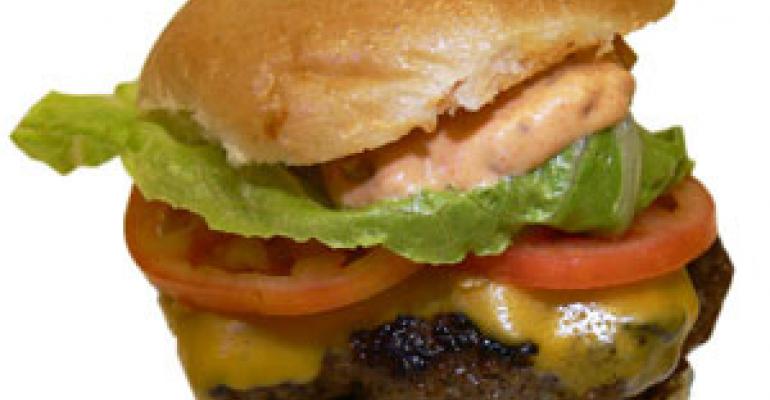 SAN FRANCISCO A San Francisco paper once described the city’s Best-O-Burger as a fast-food restaurant with a slow-food pedigree, much to the delight of proprietor Stephen Weber.

“We applied the same amount of time to developing the concept as we did when we were creating three-star fine-dining restaurants,” said Weber, referring to himself and Best-O-Burger chef Randy Lewis, both formerly of the city’s celebrated Mecca restaurant. “It took us a year and a half, maybe two years, to develop it.”

Trading down from fine dining to a burger concept is about as rare these days as a saltshaker. The list of high-end operators swapping their whisks for a spatula reads like the nominees list for some James Beard award: Emeril Lagasse; Steve Hanson of BR Guest; Stephen Starr; Marcus Samuelsson; Bobby Flay; and Hubert Keller, for example.

Most have priced their burgers at the higher reach of casual dining, playing off their renown and following. French chef Daniel Boulud, for instance, commands as much as $19 for the burgers at his new DBGB restaurant in New York City.

But Weber and Lewis wanted to differentiate Best-O-Burger through moderation — and not just in price.

“We didn’t want to be pushing an 800- or 900-calorie burger, especially in San Francisco,” said Weber, who holds the title of chief burger officer. “Our product is a gourmet mini-burger, a slider. You can enjoy one without feeling guilty.”

Every burger is presented slider-style on a miniature bun, but a White Castle or Krystal fan wouldn’t be confused about what restaurant they’re in. There’s a Vegg-O-Burger, for non-meat-eaters, as well as a Mozz-O-Meatball, made with a single meatball featuring a soft mozzarella center and topped with tomato sauce.

Among the best sellers, according to Weber, is the Cheesy Fat Bob, a “slider” consisting of a 1/3-pound hand-formed patty topped with cheese, lettuce, tomato, pickle and “Bob’s secret sauce,” a reference to fans’ tendency to speak of Best-O-Burger as Bob. “It probably accounts for 25 percent of our menu [sales mix],” Weber said.

Each of the beef burgers is made with fresh, ground Angus and is served on a newly baked mini-bun. Every patty – including the vegetarian option -- is seared on a cast-iron skillet, a process Weber knew from growing up in the Midwest.

“If your mother or grandmother was making you a burger, she’d use a cast-iron skillet,” he said. “If you sear it quickly, you don’t lose the juices. It’s not common out here, and it’s not how they do it in New York.”

Each sandwich is cooked and garnished to order, with ketchup and mustard provided for guest customization.

The sliders are offered in meal combos featuring one, two or three of the sandwiches, with prices ranging from $4.48 for the Bob Burger meal to $15.68 for the three-pack of Cheesy Fat Bobs.

The price includes portions of both Strings, or Best-O-Burger’s versions of French fries, and Ring-Os, the concept’s signature fried-onion strings. As with everything on the menu, Weber stresses, the side items are made from scratch.

Catering accounts for a big part of the restaurant’s sales mix, though Weber declined to say how much. “I’m very proud that we’ve never sold a big order to someone who didn’t come back to us for a second order,” he said.

He pegged the average check at about $8.50 per person and said about half the meals sold are sold for takeout.

The restaurant, in San Francisco’s financial district, is open only for lunch, from “11 to 2, and there’s always a line out the door,” said Weber, who still works in the kitchen during the rush.

“Our typical customer is anyone from the financial district — a lot of lawyers, a lot of stockbrokers, a lot of bankers, but also a lot of secretaries, a lot of clerks, the parking attendants” he explained. “It’s a fun, cool place that families like, so a lot of people from the district will meet their families there for lunch. We see that a lot.”

Weber said he is already negotiating to duplicate the concept, with one under development and “two more in the deal-making stages.” Some of the subsequent units will be open 24 hours, seven days a week, he adds, noting that those units will have to be larger than the 50-seat prototype, which was expanded to include the dining area since opening in May 2008.

Weber declined to divulge the fast-casual restaurant’s sales volume, noting that he’s just about to file the disclosure documents that are a prerequisite to franchising.

“We’re very happy with where the financials are right now — we’re exceeding our expectations,” he said after a lunch rush where he was pressed into filling several large orders. “If we can do that in this economy, which has been tough in San Francisco, there’s nothing but blue skies in our future.”