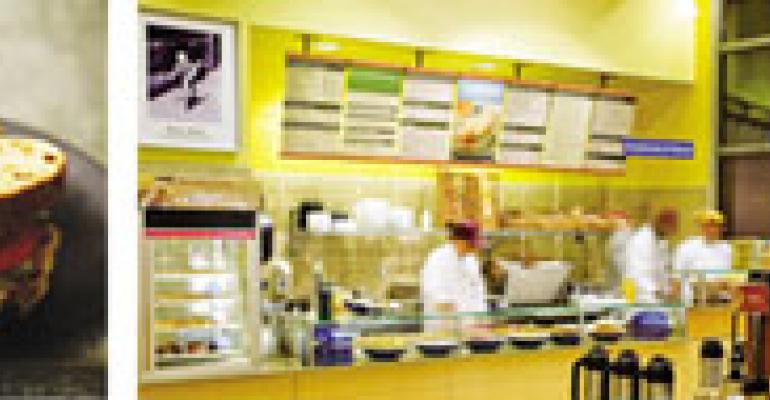 When most of us consider artichokes, what comes to mind are pizza toppings, salad additions and purees—not sandwich accents.

Yet the humble artichoke is exactly the ingredient with which Au Bon Pain’s culinary team began engineering its most successful limited-time offering of 2009, the Chicken Artichoke Sandwich. They could have started predictably and made their base from meat and bread. But instead they chose a briny, slightly slimy heart of a spiny, stubborn thistle with which few animals will even bother.

Why? Because it was different, especially so in a sandwich, said Thomas John, executive chef for the 250-unit bakery-café chain based in Boston. And in a restaurant marketplace saturated with variety yet demanding more of it, you’d better serve up uniqueness, he added.

“You start by trying ingredients you like, add that to ones you know will combine well, and that forms a kind of team,” John said. “Then you kind of round up the team with the right kind of bread and dressing.”

You also add innovative fusion ingredients like sofrito vinaigrette spiked with aged balsamic vinegar, and then you include zesty goat cheese and fragrant sun-dried-tomato bread. Establish bolder flavors first, John said, and then plug in the fully known entities, such as onions, tomato and lettuce.

When John and his group began talking up the artichoke sandwich while it was still in development, they got some puzzled looks.

“When you hear things like, ‘Oh, I don’t know how many people will go for that,’ you start to second guess yourself,” John said.

But in the end, the sandwich tasted too good to not give it a run.

“We were very confident it would do well,” he said. “But when you know you have to roll it out to so many cafés, you do worry.”

Outsiders shared John’s unease over the sandwich. Darren Tristano, a fast-casual segment watcher and executive vice president of Technomic Inc., said he also “had concerns when I heard the sandwich included artichokes.

“Sometimes that’s an ingredient people don’t like or don’t really know what to do with,” he said, “especially on a sandwich.”

It turns out there were some concerns in the trenches as well. But Mark Herman, an ABP store manager in Boston, immediately liked the idea. When he heard the Chicken Artichoke Sandwich was coming to test, he said, “I thought, ‘Artichokes? Neat! That’s snazzy!’” The sofrito vinaigrette and goat cheese interested him, too, “and the sun-dried-tomato bread is one of my favorites,” he noted.

His only concern was where to put the artichokes on the store’s already crammed sandwich line speed rack. “I was like, ‘Aye, aye, aye, another ingredient. Where’s it gonna go?’”

Maria VanDeMark, an ABP area manager in Manhattan, called the sandwich “an excellent recipe that was really well executed at the start” and “one of the easiest sandwiches to put together.” To keep the artichokes from falling off during assembly, her cooks learned to put the quartered hearts cut-side down and to spread them throughout the sandwich to maximize flavor distribution.

As with all ABP products, the sandwich got a six-week test in six stores designed to gauge guest reaction and solve unforeseen assembly challenges. John said he’s made some mistakes in the past in the engineering phase, when he didn’t account for store-level problems.

“But we caught on early with this one,” he said, “and that helped it.”

When VanDeMark’s teams passed out samples at cafés last fall, patrons gobbled them up and returned to buy whole sandwiches. At her two stores, she said, “that sandwich’s incremental sales were 30 percent higher” than other LTOs. Asked why the sandwich had such a positive reception, she explained, “It was so popular because it used ingredients we’d never seen put together before, and they all loved it.”

That it sold so well didn’t surprise Tristano despite his earlier worries about it. He said the product appeared to be a good match for ABP. The 12-ounce sandwich sells for $6.49.

“The sandwich fits with the company’s overall strategy of healthful, fresh foods, and that fits nicely within their position,” he said. “Consumers are looking for healthful alternatives to higher carb and fat counts, so there are a lot of positives about this sandwich.”

Is the Chicken Artichoke Sandwich destined for a permanent place in the ABP lineup? Despite selling second only to the chain’s most popular sandwich, the Turkey Club, that won’t happen anytime soon, John said. Adding new SKUs to the stores’ inventory is always a problem, plus ABP likes the consistent buzz generated by reintroducing tried-and-true offerings. But both Herman and VanDeMark said their stores have salad bars bearing artichokes, and that they still make the sandwich for customers who request it.

“We always step back and think, ‘That LTO did well in the summer, so maybe we’ll try it again next summer,’” John said. “Ultimately, we don’t have enough space on the line to accommodate every great sandwich, so we have to be selective.”