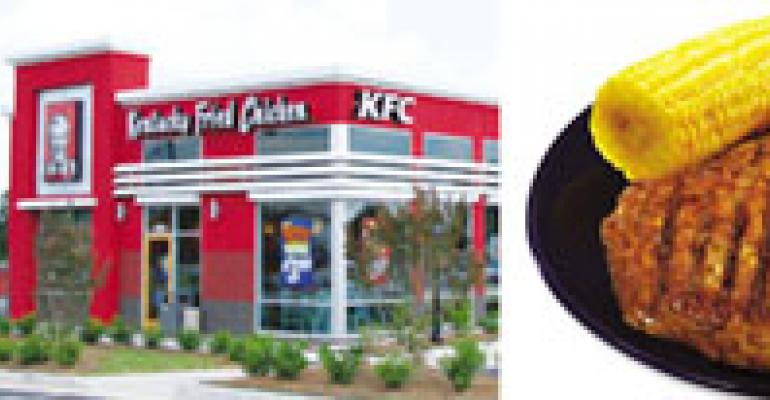 For better or worse, a menu can be said to be very highly focused when one of its crafters speaks, without the slightest hint of irony, of an elusive search for “nonfried options” to add to its list of offerings. Such focus, of course, has been a defining characteristic of KFC since the beginning, even after the chain famously shortened its name and started answering to its initials instead.

“We’ve been working on nonfried options for the past 15 or 16 years or so, everything from Colonel’s Rotisserie Gold to Tender Roast to Oven Roasted,” said Doug Hasselo, chief food innovation officer for KFC, which is owned by Louisville, Ky.-based Yum! Brands Inc. “But all of those, for various reasons, had operational issues associated with them or just didn’t resonate with the customer. So we thought: What can we learn from the past?”

What they learned in the case of Kentucky Grilled Chicken was a curious mix of everything and nothing. The “everything” included a new recipe, as well as a new cooking process to be carried out in new proprietary ovens developed expressly for the KGC mission. The “nothing” was more than nothing, of course, but a big part of the process owed to the simple wisdom of trying to minimize and simplify.

“One of the issues we knew would be foundational for success was whether we could use the same chicken-on-the-bone that we use for the Original Recipe,” Hasselo said.

Past nonfried experiments had required different varieties of chicken than the fried kind, which introduced hard-to-manage complexities related to differences in ordering, preparation and cook times. Whereas the new KGC, in the idea stage at least, would be pure harmony and elegance, enlisting the same raw chicken product—precut by the piece—that was already seeing action. The same streamlining would also allow customers, as Hasselo said, to “mix the bucket.”

“We learned early on in our consumer research that that would be a tremendous benefit, because sometimes dad likes the taste of Original Recipe, but mom is looking for something a little bit lighter to eat this time,” Hasselo said. “If you can satisfy that [disagreement], you can overcome what we call the ‘veto vote.’”

That veto vote had become more of an issue than the 5,000-unit KFC quick-service chain would have liked, as the idea of healthful eating and the idea of eating fried chicken ran off in decidedly different directions. Hence the foreshortened “F” in the chain’s name, which changed in 1991, and hence the hunt for more healthful menu items to balance out the rest of its core menu.

“We knew from the extensive testing we’d done that this could be a really defining moment in KFC history,” said Charles St. Clair, KFC’s senior director of national marketing. “From a marketing standpoint, we were trying to drive unprecedented awareness of this product.”

Some of that came by way of a memorable “UNTHINK KFC” marketing and advertising campaign, which included two UNFryday promotions with free giveaways of nearly seven million pieces of grilled chicken, according to St. Clair, as well as a high-profile promotion on Oprah Winfrey’s television show. The Oprah promotion backfired, in part, when KFC struggled to handle national demand for free meals.

But, as St. Clair said, “We believe that when people get this in their mouths, they’ll become habitual customers. We gave away around four million meals through the Oprah promotion, and we couldn’t have asked for more trials in the marketplace.”

What customers tasted was a new product featuring a “secret recipe with six unique herbs and spices” engineered to be “reminiscent of backyard barbecue flavor,” according to food innovation officer Hasselo. As important as the recipe, Hasselo said, was the new oven developed for KGC, which employs a combination of conduction and convection cooking and a proprietary coating on the grill racks, for the sake of cleaning and char.

All of that makes for a product that has come to represent 20 percent to 25 percent of all chicken-on-the-bone sales at KFC since launching last year, according to Hasselo. Part of that owes to the more healthful aspect of grilled chicken, which KFC trumpeted with a promotion offering a 395-calorie, $3.95 meal in December.

“There really is something going on out there,” said Bonnie Riggs, restaurant analyst for the NPD Group. “People really are looking for healthier options. With this whole health push, I think KFC stepped up when they needed to.”

But the grilled flavor profile has come to feature in various other guises as well, including as an option for the “buns” in KFC’s much-ballyhooed recent Double Down sandwich. The Double Down boasts between 460 and 540 calories, depending on the cooking method.

All of which plays into what Hasselo called a governing R&D strategy from the start.

“We knew we had to get taste first and foremost,” Hasselo said. “We still have a lot of research from customers who say, ‘You know, we love the idea that it might be better for us. But if it doesn’t taste great, we’re not going to buy it.’”