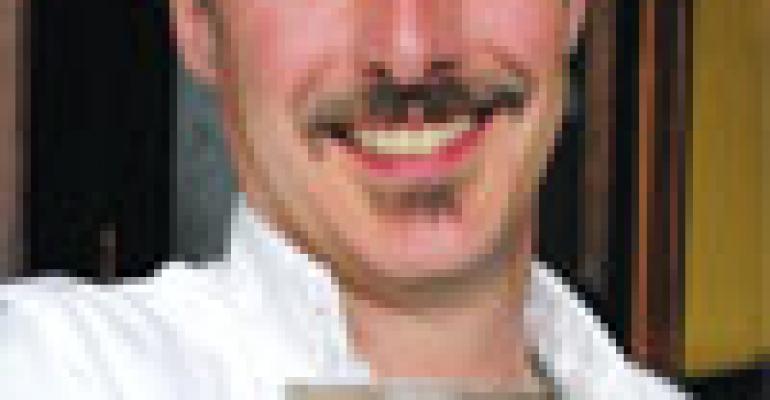 Without question, the most difficult course with which to sell a drink has to be dessert. While many a sommelier will profess an affection for certain heavy-bodied red wines, sweet whites or tawny ports as partners to chocolate, and we all might from time to time sip a brandy, whiskey or liqueur alongside our crème caramel or fruit trifle, how often do you see diners leap at the prospect of a liquid pairing with their final course? My guess: Hardly ever.

The problem with most drink and dessert partnerships is that they seem forced, as if the pressure of matching up every dish with an appropriate beverage has compelled the server or sommelier to recommend something—anything—that might at least approximate a palatable pairing. The customer senses this desperation and, understandably, declines. The trick is to take them by surprise.

Mention the idea of a beer with dessert and most diners will be intrigued. Make it a brand or a style that is new to them and their curiosity will only deepen. Position it all as a new and exciting gastronomic experience and you’ll likely have them hooked.

Just make certain that you don’t misfire on the pairing, or else what could be a tongue pleasing adventure can instead degenerate into a train wreck of competing flavors.

Fortunately, matching sweets with beer is a relatively simple endeavor, so long as a few basic guidelines are observed.

Generally, the beer should be sweeter than the dessert with which it is matched. If not, the sip taken following the bite of cake or pudding will be dominated by the sugars of the dessert, causing the beer to taste sour and thin. That unpleasant downward spiral will continue with the beer having a negative effect on the flavor of the dessert and vice versa.

Thus, particularly sweet beers such as high-alcohol bocks and doppelbocks, Belgian and Belgian-style strong ales, Scotch ales and non-hoppy barleywines are best with desserts. With the exception of the aforementioned bock family, ales work better than lagers, as the natural fruitiness of ales makes them more inclined to play well with sweets.

Fruit beers are also logical choices for dessert, but again, care must be taken to make certain they are sweet fruit beers. Certain North American examples of fruit beers can be rather subtle in their fruitiness, while others, particularly traditional lambic fruit beers from Belgium, sometimes identified as “oude,” or old, can be quite tart in character. These will obviously be more limited in their last course appeal than will those fruit beers generously sweetened with sugar or unfermented fruit juices.

Where chocolate is concerned, the rules change a bit. Because chocolate, like beer, has an element of bitterness to its taste—think gourmet chocolate bars of 70 percent or more cocoa content—the range of beers that will pair with it is considerably broader. So, for intensely chocolaty desserts, suggest very dark beers from porters to Imperial stouts, many of which actually have an element of chocolate flavor to them. Other good choices are such hoppy styles as malty IPAs, American barleywines and even so-called double IPAs, with their forceful dose of bitterness balanced by equally generous lashings of malt and considerable, warming strength.

Carefully concocted and cleverly promoted beer-and-dessert partnerships will have your customers telling tales of their explorations and experiments, not to mention your restaurant, for days or weeks to follow.