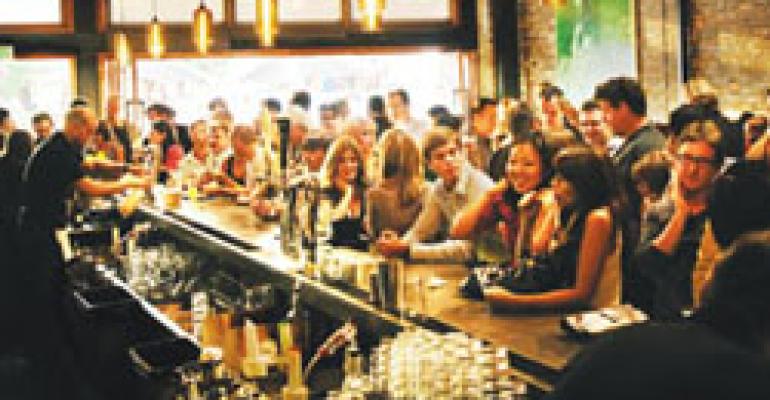 If there’s one word that is seldom immediately associated with beer, that word is “share.” Bottles of wine are by their very nature shared, since to do otherwise would seem both selfish and seriously intoxicating, but ask someone to share a bottle of beer and you will most likely be met with a look of incredulity.

Unless the bottle of beer is both the size and strength of a bottle or two of wine—or even four bottles of wine.

Welcome to the world of large-format beer bottles, drinks designed for elegant presentation, sophisticated service and, of course, sharing. They may also be the key to maximizing interest in profitable premium beer sales.

Rush Street, a downtown Culver City, Calif., restaurant that opened this summer, has made 750-milliliter bottles of beer its focus. It features 29 large-format beers and a pair of ciders under a menu heading, “Share Freely.”

“Our whole concept is sharing,” says owner Brian McKeaney. “So we stress that a group can order two or three of these bottles and share them around the table.”

McKeaney’s list includes numerous high-end Belgian brands—not surprising given that the country’s brewers pretty much pioneered the 750-milliliter beer bottle—as well as a great many premium specialty brands from American craft breweries. The people who order them, McKeaney says, tend to be those who are out for a good night.

People who order wine “are more often just diners, but beer is more of a party scene,” McKeaney says. “The tables that order a few 750s of beer are more inclined to head upstairs [to the bar] for a few more drinks after dinner.”

At Monk’s Cafe in Philadelphia, owner Tom Peters has no fewer than two magnum-sized beers on his menu at all times and finds them to be very popular with people who have something to celebrate.

“Bachelor and bachelorette parties love them, but really they suit all sorts of celebrations and parties” Peters says. “And for really special occasions, we’ll roll out the truly big bottles, like on last New Year’s Eve, when the smallest bottle we served was a 3-liter. We even had a 15-liter bottle that night, which required two people to pour.”

Then again, not every celebration needs enough beer to serve six or seven, or seventeen, people.

“A lot of people have met and started romances here at Monk’s,” Peters says. “Some of them come back to get engaged. Just this weekend, in fact, we have two proposals coming up, and each one has preordered a 750-milliliter bottle of special beer for the occasion.”

Certainly that is a situation that calls for sharing and celebration—and a really good beer.