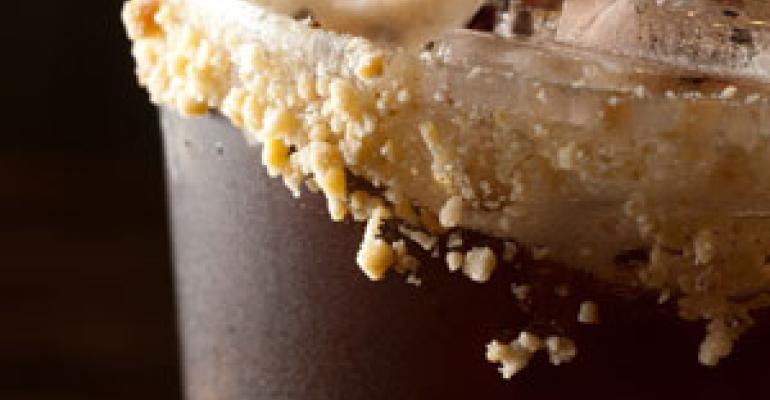 Beer cocktails bubble up on menus

Old standby gets frothy infusion from new beers on the market

Inspired by the plethora of beer styles and the mixologist’s urge to innovate, some bartenders are shaking and stirring suds with everything from absinthe to port to coffee, creating a new breed of beer cocktails that appeal to novelty seekers.

Take the Muddy Puddle, a combination of Old Pogue bourbon, iced espresso and simple syrup, shaken and poured over ice into a pilsner glass rimmed with crushed peanuts and topped off with Sierra Nevada stout. It’s a signature of JoeDoe, a 26-seat, contemporary American restaurant in New York City.

“It is one of our most popular drinks,” said Jill Schulster, co-owner and creator of ten “prepared beers,” as she calls her beer-based libations. She sells about 100 Muddy Puddles per week, each priced at $12.

Thanks to the chocolate nuances of the stout and espresso and the caramel note of the bourbon, the Muddy Puddle is a popular accompaniment to chef-owner Joe Dobias’ Banana Bread Sundae, Schulster said.

“And at brunch, forget it,” she said. “Because of the espresso, people look at it as a morning drink, too.”

Beer is no stranger to mixing. It appears in traditional all-brew blends like the Black and Tan — stout plus lager or pale ale — as well as the tangy Shandy — beer and lemonade — and the heady Boilermaker — beer and a shot of whiskey. Mexico’s classic Michelada — beer with lime, salt, picante sauce and often tomato juice — is found in an increasing number of American watering holes.

However, the new beer cocktails stand out from the old standbys. They generally are made with the high-quality ingredients and craftsmanship characteristic of modern mixology, not to mention the varied and flavorful beers that abound today.

“Bartenders are always looking for different things to use,” said Philip Ward, mixologist and partner at Mayahuel, a Mexican restaurant in New York City. “Making beer itself is an art, and if you cross the art of beer with the art of cocktails, you can really have something special.”

Ward breaks new ground with beer drinks made with infused spirits and unusual liqueurs. An example is his Luna y Sol, made with raspberry-tea-infused blanco tequila, ginger, lime and Modelo Especial lager.

Another of his creations, El Jimador’s Shifty, mixes pineapple-infused mezcal, lime, sugar cane and Negra Modelo dark lager in a glass with a spiced salt rim.

Creative beer cocktails have become popular at Starbelly, a California comfort food café in San Francisco that does not have a license to sell spirits. They include a Michelada takeoff called the Diabolito, made with tomato, lime and spices, and the Spiced Honey Stout, which mixes Anderson Valley stout with port, Madeira and a little allspice.

“We thought it would be fun to do something different with beer, not just pouring pints, but using it as a base for cocktails,” said co-owner Deborah Blum.

At Alchemy, a San Diego restaurant with an eclectic menu and bar list, house “beertails” include The Saint, a mixture of Plymouth gin, dry vermouth infused with Earl Grey tea, St. Germain and a topping of Stone Smoked Porter.

“It has the perfume of the vermouth and tea, the botanicals of the gin and the smokiness of the porter, for a lovely bouquet,” said Frankie Thaheld, mixologist at Alchemy and George’s at the Cove in La Jolla.

Also featured is the Double Archer, which unites Eagle Rare bourbon, Kubler absinthe and Allagash Curieux, a triple ale aged in bourbon barrels, plus gratings of nutmeg and cinnamon.

Such drinks are the result of a collaboration between Thaheld and David McAtee, bartender of Toronado, a San Diego craft beer bar, who did a guest bartender stint at Alchemy one night. The brew drinks went over so well they have been kept on the list.

McAtee said that he and Thaheld aimed to raise the beer cocktail beyond the traditional workingman’s Boilermaker. “It’s for people who really want to savor a lot of the higher aspects of a cocktail,” said McAtee. “We wanted to bring it to the same level that a lot of people in San Diego are taking craft beer.”

“I’ve seen a great deal of focus on Prohibition-era cocktails, but no one really trying to expand the horizons,” said Thaheld. “Beer is newfound territory. There are so many different beer flavors and styles, they just opened up a whole new can of oysters, if you will.”