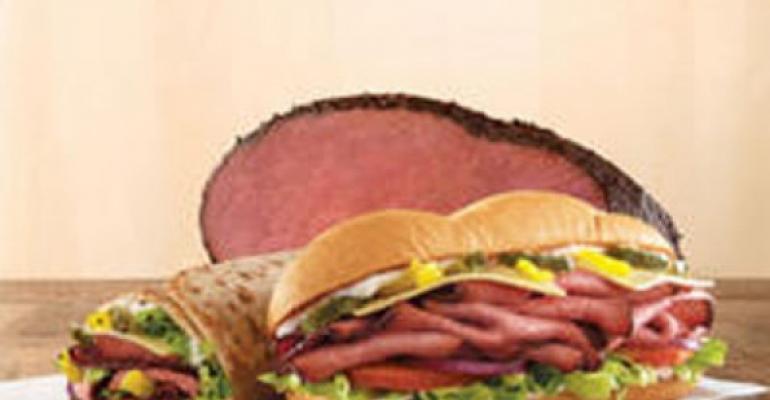 Fresh from its split with Wendy’s, the Arby's Restaurant Group Inc. is rolling out a new Angus Cool Deli Sandwich, the second offering in the brand’s Ultimate Angus menu line.

The new menu item is available nationwide for a suggested price of $4.99, or as a combo for $6.99

“This Cool Deli in the middle of the summer is a different way to eat Angus,” Davis said. “It’s the best deli sandwich out there in my view. It’s a price point we feel very comfortable about.”

Arby’s started working on the new Ultimate Angus line a year ago and plans to introduced another Angus offering in the fall, Davis said. Arby’s will launch promotions for the Cool Deli sandwich on Sunday after a soft introduction of the new offering, Davis said.

Davis said that since Arby’s is known for its roast beef, the new Angus line including the Cool Deli offering “is right down Main Street for us.”

Davis said Arby’s struggled in the past with affordability and value issues, but the Cool Deli sandwich is a great deal for $4.99.

“Last year we took a trip to Kansas City and met with culinary people,” Davis said. “Roast beef was right down our power alley. We knew McDonald’s was doing Angus, and we felt nobody was doing it to the ‘premiumness’ and the taste that we were. It’s not chopped ground beef.”

“It’s the next chapter, and we’re excited about what Roark can bring to the party,” Davis said of Arby’s new owner.