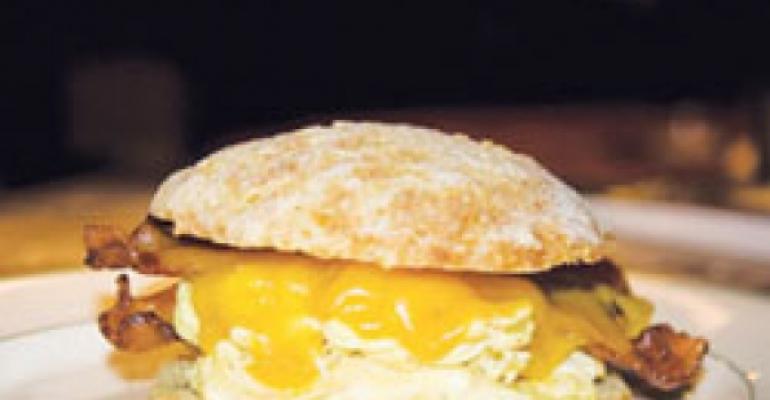 Calistoga Artisan Sandwiches in Louisville, Ky., used to offer an egg, cheese and a choice of sausage, applewood-smoked bacon or Black Forest ham on a bagel, a biscuit, or pressed, panini-style, between two slices of house-made sourdough bread, along with a cup of mixed fresh fruit, for $5.99. For another 40 cents you could get it in a sliced croissant. But when busing tables they noticed that not much of the fruit was being eaten, “and from a competitive standpoint, $5.99 is a little expensive compared to our competitors,” says chef Steve Ritchie.

“What we found was that people want more grab-and-go,” he says.

So recently he ditched the fruit,—now available as a side dish—and lowered the prices of his breakfast sandwiches by $2.

Eric Newman, executive vice president of Bojangles’ Famous Chicken ’n Biscuits, based in Charlotte, N.C., says that although dinner and weekend business are down at his company’s restaurants, “breakfast has actually increased this year, and in recent months.”

Morning tends to be a stressful, time-pressed part of the day for consumers, shown by the fact that more breakfasts are eaten in cars than any other meal, according to The NPD Group, a consumer research company based in Port Washington, N.Y.

Getting customers in and out quickly, with food that won’t drip down their arms as they drive, likely would encourage them to return, NPD reported.

Dan Dominguez, chief operating officer of Einstein Noah Restaurant Group, says his company, which operates the Noah’s Bagels, Einstein Bros., Manhattan Bagel and New World Coffee chains, continues to roll out hand-held breakfast items. The straight-up bagel and schmear is the staple of the four chains, with a plain bagel and cream cheese being the top seller, but for the past year Noah’s, Manhattan and Einstein Bros. have had breakfast wraps, including the Santa Fe, which is a sort of huevos rancheros in a wrap, and a veggie-egg wrap with mushrooms, sautéed spinach, potatoes, a three-cheese blend and tomato cream cheese. Each wrap is paired with a bottomless cup of coffee for $3 to $5, depending on the location.

After the first quarter of 2009, Dominguez said, Einstein Noah also plans to roll out a “wedge” line of offerings that will be under 400 calories. The wedges are like wraps, but folded like a cone rather than a cylinder—a bit like sushi hand rolls.

“They almost look like an ice cream cone,” Dominguez says. “They eat very well, just because they’re a little bit easier to hold because of the tapering at the bottom, and you get a little bit better disbursement of the ingredients inside.”

The first in the new line will be an egg white Florentine wedge with turkey sausage, spinach and mushrooms. The final pricing is still being worked out, Dominguez says, but he estimates that it will be less than $5.

Bagels have their place in hand-held breakfast items, although Ritchie says his best-selling breakfast sandwich at Calistoga is the sourdough panini, but at Bojangles’ it’s all about the biscuit.

He says up to 40 percent of Bojangles’ sales are during breakfast, and most of that is biscuit sandwiches, which can include any combination of steak, a boneless piece of fried chicken breast that they call the Cajun fillet, sausage, country ham, bacon, egg, cheese, butter, jelly or white country gravy.

Newman says price, quality and convenience all are crucial parts of an item’s value at breakfast. From a quality perspective, that means they only allow a 20-minute holding time for the biscuits, which are made from scratch. When it comes to convenience, the chain’s target drive-thru time is 30 seconds per customer.

The chain’s check average at breakfast at company-owned restaurants is $4.65, compared to an all-day average of $5.30.

At Parish Foods & Goods, one of the restaurants of Atlanta’s Concentrics Group, chef Tim Magee has seen success with his Doghead biscuit. It’s a gigantic, five-inch buttermilk biscuit filled with four eggs, three slices of Cheddar cheese and two to three slices of thick-cut, house-smoked bacon. He sells it for $6.50 and it’s tied for first place as the restaurant’s most popular breakfast item, running neck and neck with the classic American-style breakfast of eggs, potatoes, breakfast meat and toast.

In New York City, at The Smith, chef-owner Glenn Harris sells a Cheddar-chive biscuit for $2.

He simply folds grated Cheddar cheese and chives into biscuit dough and bakes them every half hour. It’s particularly popular at his pick-up window, located at the restaurant’s bar.

Biscuits are not the only decadent hand-held breakfast item, however. Wraps can be rich, too, says Courtney Parks, chef-owner of Open City in Washington, D.C.

“Most of our egg dishes we serve with hash browns and grits,” he says. “But this one is a bit on the heavy side.”

Besides, being just a block away from the subway and being near two hotels, the zoo and other tourist sites, a lot of his guests want their food to go. Hash browns and grits aren’t so portable, but fruit is no problem.