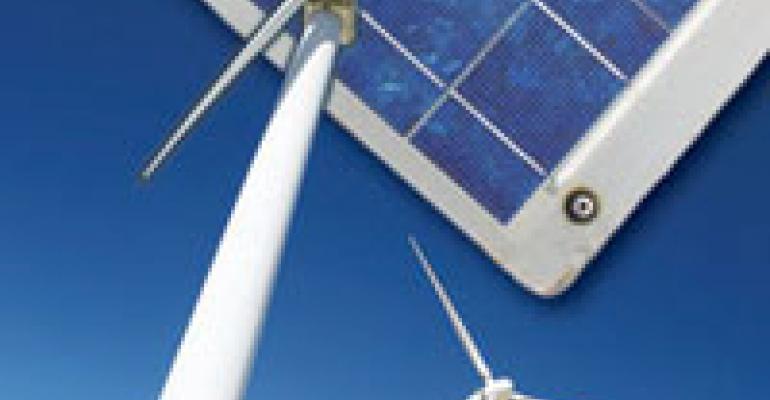 Concerned over the effect the economy is having on their businesses, restaurateurs are being forced to rethink how much “green” they can actually spend on environmental practices.

Although more operators say they would like to increase their eco-friendly efforts, many are being forced to postpone or dial back green-related investments as they fight to stay in business.

“Sadly, the downturn has made some of our initiatives more difficult to maintain,” said Carlos Suarez, owner-operator of the fine-dining restaurant Bobo in New York City. “Our ConEd renewable-energy program costs us 20 percent more than standard service. Our monthly electric bill is in the $2,000 to $3,000 range, so annually it’s about $30,000.”

Suarez said when Bobo opened in lower Manhattan last year, he installed a water filtration system that allowed the restaurant to serve its guests purified still and sparkling water instead of offering the bottled variety. Suarez charged his guests $1 each for the filtered water and then donated all of the money to a water-focused charity. Now, he still charges the dollar, but is no longer able to donate the funds. Instead, they are used to pay for the filtration system.

“We were donating this dollar to charitable programs, but have had to suspend this during the downturn because we have to pay for the rental of the system,” he said. “We have to try and recoup the cost of that.”

Jeff Harvey, president and chief executive of Burgerville, the 39-unit quick-service chain based in Vancouver, Wash., said even his environmentally minded chain has had to re-evaluate its efforts.

“We’ve had to have conversations about whether to continue some of the programs we’ve initiated,” he said.

He noted that a meeting was held in mid-January to determine whether Burgerville should continue recycling its fryer oil and possibly reduce the level of wind power it uses as an energy source.

“It’s just prudent business to willingly go back and reassess every decision that affects the costs of that business,” he said. “It’s responsible to know rather than not.”

He added, however, that the chain opted not to reduce its eco-friendly business plan.

“Our analysts found that the impact to our guest count and brand would have been far costlier if we’d changed,” he said.

To keep costs in line, Chris Moyer, project manager for the National Restaurant Association’s Conserve Initiative, said operators should look at employing no- or low-cost options that would lower operating costs and aren’t too expensive to implement. Some of those initiatives, he noted, include staggering the hours of equipment power usage when possible and conserving water by asking customers if they want a glass rather than putting it out for automatic consumption.

“It’s hard to put an exact dollar figure on [how much going green costs] because every operation is different,” he said. “The thought process is different for everyone, but with everything that has happened in the last year, businesses do need to look at the economic standpoint of sustainability. If we can position ourselves to lower operating costs and increase profit margins, every operator can make between 4 cents and 5 cents on the dollar.

“Companies need to find what fits them. They can invest in no-cost things first and then move onto low-cost, take those monies, and invest them into future savings. That’s the way we’re urging operators to go. In these economic times it maybe is not the wisest thing to drop a huge amount on equipment.”

Moyer noted that according to the NRA’s 2009 Industry Forecast, 43 percent of family-dining operators, 45 percent of dinnerhouses, 50 percent of fine-dining establishments and 27 percent of quick-service restaurants said they wanted to implement more sustainable initiatives at their businesses.

“In the forecast, we found that companies are investing more in sustainable practices,” Moyer said. “There is a huge savings on these activities. Operators need to take a look in the mirror of their business model and position themselves for when [there is] a bounce back.”

Marjorie Kelly, co-founder of Corporation 20-20 at the Tellus Institute, a nonprofit research and policy organization based in Boston, said that while pursuing sustainable practices is difficult right now, such initiatives should not be abandoned.

“Environmental practices are as important a part of business as anything, but the whole thing has to work together,” she said. “It has to be sustainable financially, or you will be out of business. Everything must hang together.

“We know that people are starting to eat out less, and we’re seeing slowdowns in revenues so [businesses need to] focus on what they do best and cut costs where they can. However, there are very real financial consequences from the neglect of environmental stewardship, and we’re starting to arrive there as a culture. We must rework this, and it needs to be done collectively; we can’t manage it at an individual level.”

Bobo’s Suarez said the economic crash would not keep him from pursuing the eco-friendly initiatives he can afford to employ.

“The downturn has certainly focused us more keenly on waste—turning off the lights, HVAC, fans, etc. when they’re not being used,” he said. “We’ve always been keen on reusing paper, minimizing waste in the kitchen and recycling. This is clearly a worthwhile business practice no matter the economy; it may be even more necessary in these times.”