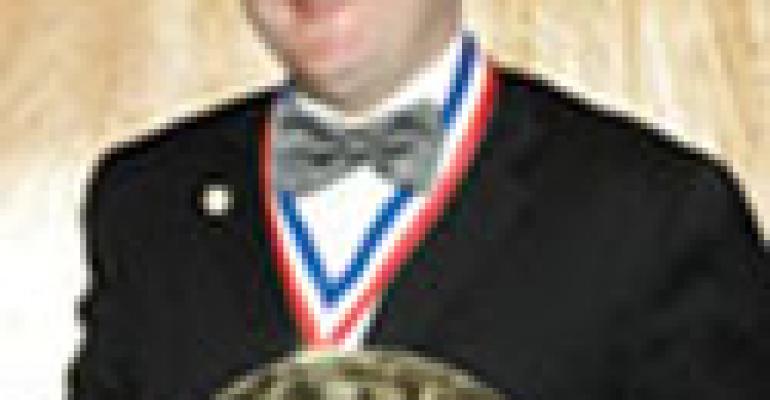 CHARLIE TROTTER, the pioneering chef-owner of the fine-dining Charlie Trotter’s restaurant in Chicago, was presented with the 2008 Gold Plate award at a gala event held in Chicago in May.

The award is given annually by the International Foodservice Manufacturers Association to recognize excellence and achievement in the restaurant industry.

Trotter, who was honored in the independent-restaurant category, was selected from a class of Silver Plate Award winners representing nine areas of foodservice. The other winners and their segments were as follows:

PAT H. FARRIS of the Archdiocese of New Orleans, elementary and secondary schools

Pickens was selected from that group for the additional honor of Operator of the Year.

The Innovator of the Year award went to FEDELE BAUCCIO of Bon Appétit Management Co. for his company’s early adoption of socially conscious food practices.

Additionally, Taco Bell founder GLEN BELL was named Pioneer of the Year for his role in the development of the quick-service Mexican segment. The honor previously has been given to such industry icons as Ray Kroc, Dave Thomas and Harland Sanders.

JOSEPH K. FASSLER, retired president and chief executive of Viad Food Service & Hospitality, received the annual Thad and Alice Eure Ambassador of Hospitality Award, the highest honor given at the Salute to Excellence gala, held in Chicago in May.

The award is presented by the National Restaurant Association Educational Foundation.

During the event, the NRAEF’s College of Diplomates inducted three industry veterans into its ranks: HERMAN CAIN of leadership consulting firm THE New Voice Inc.; WILLIAM REGAS, chair emeritus of Regas Restaurants and co-founder of the Grady’s restaurant concept; and CHRISTIANNE RICCHI of Ristorante i Ricchi in Washington, D.C.

The 2008 Michael E. Hurst Lifetime Achievement in Excellence Award went to RAPHAEL KAVANAUGH of the department of hospitality and tourism management at Purdue University.

Each year Nation’s Restaurant News and the National Restaurant Association Educational Foundation present the SPIRIT awards to foodservice providers who demonstrate excellence in recruitment and retention.

Presented during the Multi-Unit Foodservice Operators conference, the SPIRIT awards went to Chicago-based MORTON’S THE STEAKHOUSE, in the fine-dining category; Austin, Texas-based CARINO’S ITALIAN, in the fullservice category; Gaithersburg, Md.-based SODEXHO, in the on-site category; and Wheat Ridge, Colo.-based QDOBA MEXICAN GRILL, in the quick-service category.

Each year Nation’s Restaurant News cites a class of young, fast-growing concepts for their innovative ideas and promising futures.

This year’s winners were CHOP’T CREATIVE SALAD CO., based in New York; THE COUNTER, based in Culver City, Calif.; JASPER’S RESTAURANT, based in Dallas; ORGANIC TO GO, based in Seattle; and VAPIANO, based in McLean, Va.