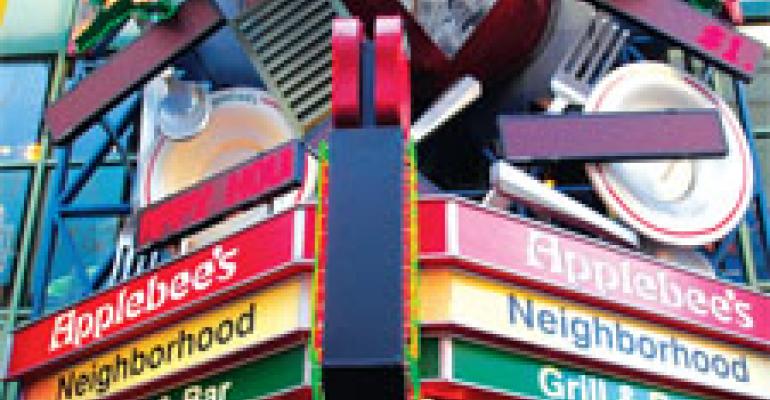 FOODSERVICE OPERATORS LOOKING BACK AT 2007 MIGHT BE CONSIDERING WHETHER OR NOT it deserves to be called “The Year of the Heartburn.”

Across the foodservice landscape, operators from all segments, including quick service, fast casual, fine dining and especially casual dining, faced myriad challenges that put intense pressure on both operations and bottom lines. A number of high-profile acquisitions, mergers and spin-offs changed the competitive horizon as well.

Many said 2007 has been one of the toughest years in recent history because of the slowing economy and customers who were buffeted by a perfect storm of high gasoline and fuel prices, declining house values, tighter credit because of the subprime-mortgage fallout, and a U.S. dollar that has steadily fallen in value, making imported products more expensive.

And this final month of the year was expected to provide little cause for celebration. Forecasters from Standard & Poor’s and other consultants expected holiday spending to increase only 3 percent over last year, just keeping pace with the projected inflation rate of 2.7 percent.

Mother Nature also stirred up a unique set of challenges.

In the West, fires in Southern California in October and November caused more than $1 billion in damage and forced some restaurateurs to close down. In the Southeast, a drought forced many Atlanta-area restaurateurs to make changes in the way they used and served water. Cliff Bramble, co-owner of Rathbun’s Restaurant, Rathbun’s Steak and the Krog Bar in Atlanta, said: “It is on our minds daily. We are all concerned about the restrictions on restaurants that could hurt the economy as well as many operators…chain or not.”

The middle of the nation, especially Texas, was hit hard midyear with higher-than-usual rainfalls that caused widespread flooding. At the start of the year, a late-season freeze in California put pressure on prices for citrus, leafy greens, strawberries, avocados and other produce. And poor lobster catches forced the price tags of that crustacean sky high.

Green initiatives gained momentum throughout the industry during 2007. Exhibitors at the National Restaurant Association Restaurant, Hotel-Motel Show in Chicago in May displayed products that consumed less energy and had a distinct environmental consciousness.

“The world is waking up to the environment,” said show speaker Michael Oshman, executive director of the Green Restaurant Association. “If you’re a restaurateur, there’s a demand for things to happen.”

Reflecting operators’ increasing environmental consciousness, high-profit bottled waters gave way at some eateries to restaurateurs’ own “house-bottled” versions, produced by filtering municipal tap water. Some operators said the loss in profit was outweighed by the positive public relations of such a move.

“I think it comes back to us in customer good will,” said Mark Pastore, owner of Incanto in San Francisco. “I think many diners have a number in their heads when they go out to dine, and when you don’t charge for water, they might be more inclined to spend that money elsewhere on the menu.”

Real estate also was top of mind throughout the year.

“We’re not even in a recession yet, but real estate has been rising, and now we have this tight credit market,” said Allan Hickock, managing director of the Restaurant Industry Group for the Houlihan Lokey investment banking firm in Minneapolis. “For companies that are still executing their fundamentals, tight credit can be a good thing.

“But it’s been said before: When the going gets tough, the weak get weaker and the strong get stronger.”

A number of restaurant companies were positioning themselves in broader segments of the industry.

Family-dining behemoth IHOP Corp. of Glendale, Calif., in late November completed its acquisition of casual-dining stalwart Applebee’s International Inc. for about $1.9 billion. IHOP planned to sell most of Applebee’s company-run restaurants to franchisees, cut costs and complete sale-leaseback transactions on corporately owned real estate assets. IHOP detailed for the first time that it planned to sell 475 of Applebee’s 510 corporate locations by the end of 2010. Select markets could be sold by early next year, the company added. Sale-leasebacks of Applebee’s-owned real estate assets are also under way, the company said, and those deals are expected to close early next year.

“We believe that [IHOP’s] core competencies of re-energizing restaurant brands, franchising and expense management are ideally suited to improve Applebee’s overall brand and financial health,” Julia A. Stewart, chairman and chief executive of IHOP, said in a statement. “We look forward to applying the same focus and discipline that we have employed successfully at IHOP over the last several years to generate meaningful and sustainable improvements within the Applebee’s business.”

But the credit crunch caused by the subprime-mortgage problems in residential real estate was throwing a wrench into other sale plans. Wendy’s International Inc. of Dublin, Ohio, said its sale was being hindered by the volatility in the credit markets.

Other companies were trying to streamline amid the turmoil. Brinker International Inc. said in September that it was shopping its Romano’s Macaroni Grill chain to potential buyers. Darden Restaurants reached an agreement to sell its Smokey Bones concept for $80 million to Sun Capital Partners Inc. shortly after merging with Rare Hospitality of Atlanta, the parent to the LongHorn Steakhouse and Capital Grille brands. And holders of $400 million in unsecured corporate notes reached an accord with Landry’s Restaurants Inc. for higher interest rates in midsummer.

Other restaurant companies were reining in their plans for growth.

P.F. Chang’s China Bistro Inc. said it was scaling back plans for growth of its fast-casual Pei Wei Asian Diner in 2008.

And some operators were teaming up with large retailers. Campero USA of Dallas, the U.S. arm of Guatemala-based Pollo Campero, signed a deal with Wal-Mart to begin opening units within the retailer next year as it seeks to grow its Hispanic market. Pollo Campero currently has 34 U.S. units.

Hispanic patrons actually were being courted in a variety of ways.

The Pizza Patrón chain, based in Dallas and targeting the Hispanic market in Arizona, California, Colorado, Nevada and Texas, fueled a firestorm of international media attention and angry anti-immigration criticism in January when it began accepting Mexican pesos in addition to U.S. dollars.

“It’s about trying to out-position your competitors, but the immigration issue has spurred a whole round of attention,” said founder Antonio Swad.

Meanwhile, the U.S. Congress stalled in producing legislation aimed at immigration reform, and restaurant operators continued to deal with undocumented workers in many ways.

Ed Tinsley, former chairman of the National Restaurant Association, announced his bid for a seat in the U.S. House of Representatives in New Mexico. He said his work with the NRA gave him “unparalleled experience” in helping constituents and strengthened his bid for a seat currently held by Republican Rep. Steve Pearce, who plans to run for the U.S. Senate.

Meanwhile, menu-labeling mandates were on the radar in municipalities such as New York City and Washington’s King County, where Seattle is located. Both jurisdictions adopted ordinances requiring the posting of nutrition information.

Some chains were providing reduced portion sizes, such as T.G.I. Friday’s and Black-Eyed Pea, or calorie-limited offerings, such as at the expanding Seasons 52 chain, which is owned by Darden Restaurants Inc.

Competition for the family-dining dollar was intensifying. Upscale grocers were pressuring restaurants by selling gourmet prepared meals. Also, the growing number of theater-restaurant hybrids such as Movie Tavern, Cinnebarres and Studio Movie Grill, were making dinner and a movie a one-stop shop.

Fast-food chains such as McDonald’s were upgrading the quality of their coffees. And Denny’s opened a drive-thru restaurant in Indianapolis, the first one for the 1,539-unit family-dining chain.

But despite all the challenges and turmoil, entrepreneurs still were willing to stake a claim in the restaurant industry. Some were high-profile entertainers from other businesses. Michael Lohan, father of actress Lindsay Lohan, was reportedly scouting properties in California to create a restaurant for his daughter. Guitarist Carlos Santana teamed up with Dudum Sports & Entertainment Corp. of Walnut Creek, Calif., to create a Maria Maria restaurant and a Santana’s, considered for Las Vegas in early 2009.

And restaurants still provided good holiday-shopping gifts, even though their gift-card sales drew scrutiny in 2007. The Federal Trade Commission, which had been reviewing gift-card providers’ deductions from cards after they had been unused for extended periods, settled with Darden Restaurants Inc. and the Kmart subsidiary of Sears Holding Co. over the use of the so-called “dormancy” fees. The FTC had said the fees were not prominently displayed on the cards. Darden indicated it did not plan to impose such fees in the future.

Perhaps no restaurant story this year reached the critical swirl of the rats at the KFC-Taco Bell unit in New York City as an Internet-fueled videotape of the industrious rodents made its way around the world on YouTube.

Robert Passilkoff, president of the New York-based Brand Keys consulting firm said, “We have a saying: Nothing’s faster than the speed of light [except] bad news on the Internet.” Consumers, he said, have “got access to information and exposure to information that the brands no longer control.”

The generosity of the restaurant industry knows no bounds, and operators large and small continued to put their muscle and their hearts into philanthropic endeavors throughout 2007. Below is a small snapshot of the significant funds that were raised and the worthy causes that the restaurant industry benefited during the past year.

OLIVE GARDEN, a division of Darden Restaurants Inc. in Orlando, Fla., raised $5.2 million for the Leukemia and Lymphoma Society through its 13th annual Pasta for Pennies program.

FEMALE CHEFS AND WINE-MAKERS in Los Angeles raised $830,000 for the Jonsson Cancer Center Foundation at the University of California, Los Angeles, during Taste for the Cure 2007.

Operators in Atlanta, through this year’s SHARE OUR STRENGTH Taste of the Nation event, raised $750,000 for the Atlanta Community Food Bank, Project Open Hand and GENESIS–a New Life.