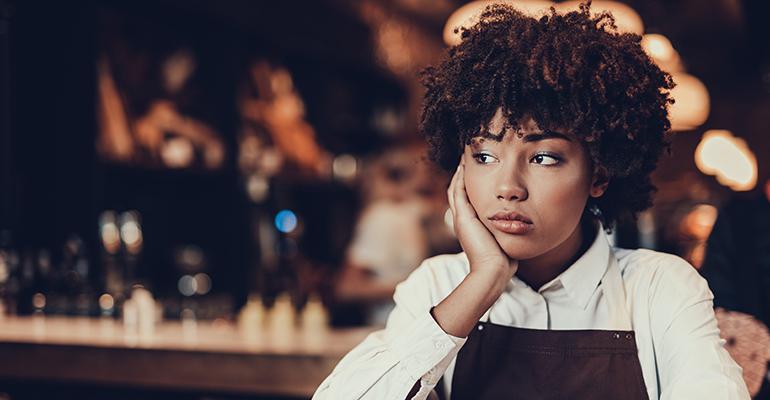 YakobchukOlena / iStock / Getty Images Plus
More than 34% of workers responding to a survey in early September reported more violations of their rights in 2021 compared with last year.
Operations>Workforce

Report: Restaurant workers are seeing an uptick in wage theft, harassment and hostility in 2021

For restaurant workers, 2021 has been even worse than 2020, according to a new report released Monday from labor advocacy group One Fair Wage.

More than 34% of workers responding to a survey in early September reported more violations of their rights in 2021 compared with last year, the report said. Nearly 35% said their tips and additional wages did not bring them up to their state’s minimum wage; and nearly half (47%) said they were not compensated for overtime.

Related: Sexual harassment of restaurant workers has grown dramatically during the pandemic, a One Fair Wage study claims

“We are seeing a real uptick in violations of worker rights in this industry,” said Saru Jayaraman, One Fair Wage’s president, who appeared in a Facebook Live seminar on wage-and-hour protections hosted by the Department of Labor on Monday along with U.S. Secretary of Labor Marty Walsh.

Walsh, who was mayor of Boston before he was confirmed as Labor Secretary in March, reiterated his stance that “restaurant workers are essential workers,” thanking them for their service and pledging the department’s protection. “You feed us. You feed our communities. You support our communities and you kept us going throughout the pandemic,” he said to restaurant worker listeners during the seminar.

Related: Four reasons workers are staying away from the restaurant industry and what you can do about it

The report, conducted by One Fair Wage, was based on survey of about 238 tipped workers across the country from Aug. 31 through Sept. 14.

Overall, workers said tips have declined and sexual harassment and customer hostility has gotten worse in 2021, according to the survey.

Three quarters (75%) of tipped workers said gratuities have decreased and more than half (54%) reported an increase in hostility and harassment related to enforcing COVID protocols.

And more than half of respondents (54%) say they have considered leaving the industry, and most (76%) blamed low wages and tips. But concern about COVID safety was also a factor (58%) as was customer hostility (41%).

What would make them stay: 78% said a full, stable, livable wage with additional tips, but 38% wanted increased hours, and 48% said paid sick leave.

Better COVID-safety protocols (34%), better health insurance (37%) and a less hostile work environment (37%) were also factors that would keep workers in the industry.

One Fair Wage has long argued for higher wages and elimination of the tip credit, and the group has also spotlighted other issues exacerbated by the pandemic, including sexual harassment and customer hostility when it comes to safety protocols, like wearing masks or showing proof of vaccination.

But data from more neutral sources also supports the perception of worker mistreatment as a factor in the ongoing labor crisis.

And reports indicate front-of-the-house workers across the country are finding it increasingly difficult to enforce vaccine and mask mandates when customers refuse to comply.

According to the One Fair Wage survey, 30% of respondents said they were reluctant to enforce COVID safety protocols this year out of concern guests would tip less, and 31% said unwanted sexualized comments from customers has increased.