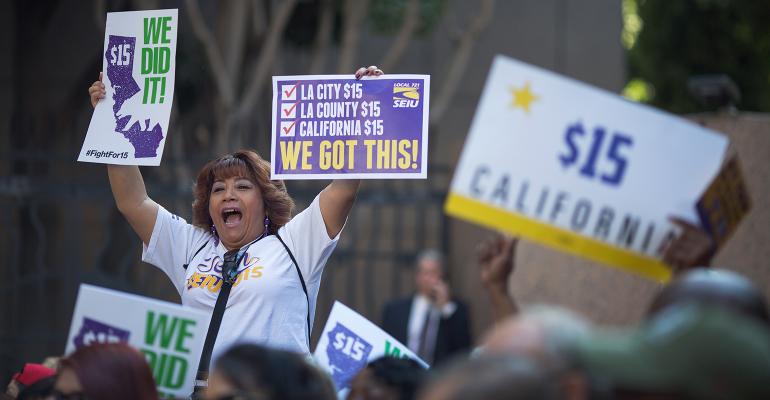 Another new year brings another round of minimum wage hikes in 18 states.

The federal minimum wage remains at $7.25 per hour, with a tipped wage in some states at $2.13 per hour. But many states are taking action with wage hikes scheduled to go into effect on Dec. 31 or Jan. 1, 2018.

In 10 states, the increases are part of a phased-in transition to reach a certain level, eventually $15 per hour in states like New York and California.

Additionally, in Washington, D.C., and Oregon, wage hikes are scheduled to go into effect in July, rather than Jan. 1, 2018. In the District of Columbia, the minimum wage of $12.50 per hour will increase to $13.25 per hour, and in Oregon the standard rate of $10.25 increases to $10.75 on July 1, although wage rates are higher for employers in the Portland area.

Another 20 cities and counties across the country will also raise minimum wages on the first of the year, and more wage hikes are coming. Campaigns are underway to raise the minimum wage floor in at least 17 more states and cities, including Massachusetts, New Jersey, Vermont, Illinois, Missouri, Michigan and Nevada, according to the National Employment Law Project.

Vermont: The $10 per hour minimum wage increases to $10.50 per hour, with additional indexing beginning in 2019.