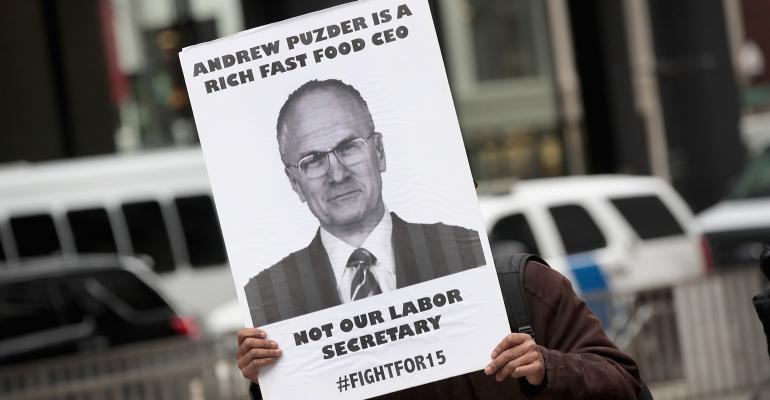 Restaurant worker activist groups on Thursday amped up their protests against the Secretary of Labor nomination of Andy Puzder, CEO of CKE Restaurants Inc., filing 33 complaints against Carl’s Jr. and Hardee’s franchisees.

"This is more fake outrage from the unions and special interests which will stop at nothing in order to push their own self-serving agenda," a Puzder spokesman said in an email. "Fact is, Andy is a job creator and has provided opportunity for advancement for thousands of employees. His record of creating jobs is exactly what this country needs."

A CKE spokesperson emailed a response Thursday on behalf of the company. “While we do not comment on pending litigation, we’d like to offer a reminder that CKE Restaurants is nearly 95 percent franchised,” the company said. “Each of these 2,769 franchise stores are run independently and solely responsible for their employees, management and adherence to regulations and labor practices.”

In a phone conference with two current Hardee’s workers and one former Carl’s Jr. employee, the organizing Fight for $15 said workers on Wednesday and Thursday filed complaints of wage theft with state departments of labor, sexual harassment complaints with the U.S. Equal Employment Opportunity Commission and unfair labor practice charges with the National Labor Relations Board.

“We’ve been collecting violations at the stores for quite a while,” Fells said, adding that Fight for $15 is looking at other restaurant chains like McDonald’s as well.

Meanwhile, the Senate on Thursday delayed for a third time its confirmation hearing for President Trump’s nominee to allow Puzder more time to submit his paperwork, the Washington Post reported.

The hearing is now scheduled for Tuesday, Feb. 7, according to a statement Thursday from Sen. Lamar Alexander (R-Tenn.), the chairman of the Senate Health, Education, Labor and Pensions committee.

Earlier confirmation hearings had been scheduled Jan. 12, Jan. 17 and Feb. 2. George Thompson, a spokesman for Puzder, issued a statement that said: “Mr. Puzder’s nomination paperwork is progressing and he is looking forward to the hearing.”

As part of Thursday’s Fight for $15 protests and complaint filings, Catherine Ruckelshaus, general counsel and program director for the National Employment Law Project, said it was galling that CKE restaurants “chisel wages from the workers that are the face of the brand across the country. CKE should be setting standards and not undermining them.”

With these complaints, Ruckelshaus said, “It’s clearer now than ever that Andy Puzder presides over a fast-food empire that routinely exploits and abuses the workers who build its profits.

She said the Senate had all the reason it needs to reject Puzder’s nomination “and demand a labor secretary who will look out for working Americans instead of one who looks for ways to keep them down.”

The press conference also included statements from: Caetana Cardona, a 28-year-old former Hardee’s worker from Tampa, Fla., and single mother of four, who recounted an incident of alleged sexual harassment; Ivan Nava, a 24-year-old Carl’s Jr. worker in south-central Los Angeles; and Torrance Chambers, a Hardee’s cook from Birmingham, Ala., for the past three years.

Joe Kefauver, managing partner of the Align Public Strategies public-affairs firm, said the protests and complaints would add fuel to the fire of Puzder's and the industry's detractors and elevate the rhetoric, but the actions would “likely make little difference on the outcome.”

“I doubt they expect to scuttle Puzder’s confirmation, they are simply using the process to continue driving their message,” Kefauver said in an email to Nation’s Restaurant News. “Republican leadership in the Senate is wholly committed to confirming the president's nominees, and I think this nomination is no different. Barring something unforeseen, he will likely be confirmed.”

Kefauver said the claims and protests are “a double-edge sword” for the industry and restaurateurs.

“Puzder's nomination, the confirmation process and his tenure in office will provide the industry with a significant platform to demonstrate that we are an industry of opportunity for millions of Americans, a critical player in the national economy and an important part of the communities we serve,” Kefauver said.

On the other hand, he said, Puzder’s nomination gives the industry’s detractors ammunition to criticize the business model, call into question the value of jobs that restaurants create and perhaps tarnish the reputation of the leading employers.

Puzder’s nomination and potential service as labor secretary will heighten the stakes for both sides, Kefauver added.

“At the end of the day,” he explained, “I think the opportunity for us to reset the narrative around our industry is far greater than theirs and I'm hopeful that we will take full advantage of this opportunity.”

Update: This story has been updated to include a comment from Andrew Puzder's spokesman.