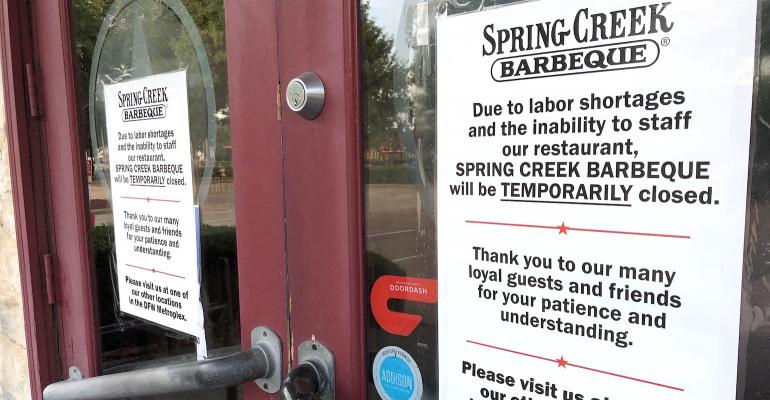 Foodservice positions increase in May as jobless rate dips to 5.8%

The nation’s unemployment rate fell to 5.8% in May, the U.S. Bureau of Labor Statistics reported Friday, as the foodservices and drinking sector added 186,000 jobs — a third of the 559,000 positions gained in the month.

Eating and drinking establishment employment is in the bureau’s larger leisure and hospitality category, which added 292,000 jobs in the month “as pandemic-related restrictions continued to ease in some parts of the country,” the agency noted.

However, the bureau noted, “Employment in leisure and hospitality is down by 2.5 million, or 15%, from its level in February 2020.” The COVID-19 pandemic was declared in March of last year.

On Friday, Cheshire, Conn.-based Wayback Burgers, which has more than 166 locations, said it was offering a free side of regular fries to job applicants at a national hiring event in participating units June 8 and 9. The goal was to hire 5,000 new employees at its 135 U.S. locations in 31 states.

“Realizing that the hiring game is a competitive marketplace, we at Wayback Burgers wanted to entice our applicants in a way that gives them a true taste of our brand,” said Patrick Conlin, president of Wayback Burgers, in a statement.

Greenwood Village, Colo.-based Red Robin Gourmet Burgers Inc. earlier in the week said it will host a national hiring day on Tuesday at more than 500 locations. Red Robin said prospective employees could schedule interviews at a dedicated website, and it would also welcome walk-in meetings.

The May unemployment rate dipped 0.3 percentage points, to 5.8%, from April, The Bureau of Labor Statistics said. “Notable job gains occurred in leisure and hospitality, in public and private education and in health care and social assistance,” the May report noted.

Overall, the number of unemployed people fell by 496,000, to 9.3 million, in May. “These measures are down considerably from their recent highs in April 2020 but remain well above their levels prior to the coronavirus (COVID-19) pandemic,” the bureau said. In February 2020, the unemployment rate was 3.5% and the number of jobless was 5.7 million.

The Independent Restaurant Coalition, which has advocated for increased assistance for restaurants struggling because of pandemic restrictions, said restaurant and bars in May still employed nearly 1.5 million fewer people than before the pandemic.

“People who depend on restaurants and bars for their livelihood continue to be disproportionately impacted by this pandemic and need help,” said Erika Polmar, the coalition’s executive director, said in statement. “After 15 months of lost revenue, restaurants and bars are barely hanging on by a thread. They are struggling with rising prices, consumer hesitancy and a pile of debt that will soon come due.”

Earlier this week, Black Box Intelligence reported that high employment turnover rates remained a concern for full-service restaurants as the economy emerged into the vaccine era.

The Dallas-based analytics and data insights company said the states with the highest restaurant employee turnover rates in full-service during the first quarter were: Mississippi, Alabama, South Dakota, Georgia, South Carolina and Tennessee.

“All these states except for South Dakota were in the list of states with highest limited-service turnover during the quarter,” Black Box noted.