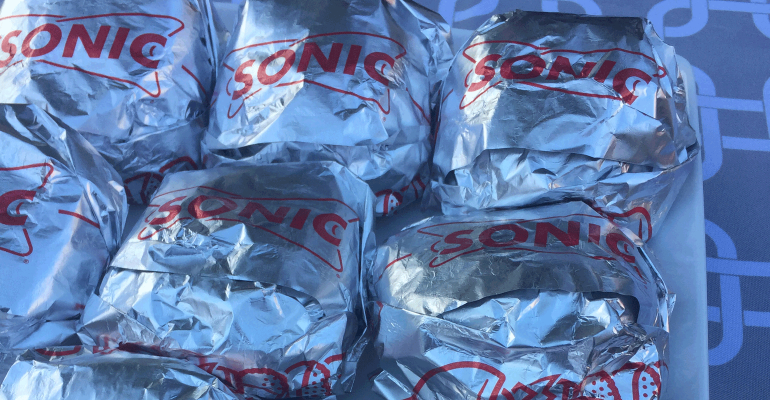 Sonic Drive-In is slated to be the first national quick service chain to test a “blended burger,” a beef-mushroom blend touted for being more healthful and less of a strain on the environment than conventional hamburgers.

The Sonic Slinger will be tested in several markets starting at the end of August for 60 days, according to Scott Uehlein, the Oklahoma City-based burger chain’s vice president of product innovation and development. It will contain between 25 percent and 30 percent cooked mushrooms, along with ground beef and seasoning, and is being marketed as a premium steakhouse-style burger, sized at just under three ounces, between a slider and a full-sized burger, and priced at $2.59 in a simple build including lettuce and tomato.

Uehlein announced the new burger at the fifth annual Menus of Change Leadership Summit, a collaboration between the Culinary Institute of America and the Harvard T.H. Chan School of Public Health. Menus of Change seeks to help evolve the way foodservice operators feed their customers to benefit public health and the environment. The Blended Burger project, conceived by the Mushroom Council, the trade body for cultivated mushrooms, is supported both by Menus of Change and the James Beard Foundation, and has gained popularity at colleges and universities. Numerous high-profile fine dining chefs have also offered their own versions as specials at the urging of the Beard Foundation. Uehlein said the burger has been well received in focus groups, where it was greeted with “disbelief” and “excitement.”

“My hope is that a year from now we’ll be standing here talking about a national rollout,” he told Nation’s Restaurant News.

He said the intermediate size of the burger was chosen because smaller burgers resonate with Sonic guests looking for better-for-you options.

He said that “size play” worked well with Lil’ Grillers, a small patty melt, introduced as an LTO by the chain last year.

Although the Slinger will be a more healthful option, it’s not being marketed as such.

“The most difficult thing that we faced was, how do we talk about this?” he told the Menus of Change conference.

Ultimately, they decided to stay away from the better-for-you message and focus on the taste.

There are about 3,560 Sonic Drive In locations nationwide, according to NRN Top 100 data.