/sites/all/themes/penton_subtheme_nrn/images/logos/footer.png
Recent
Recent
Starbucks promotes regional vice president Dennis Brockman to global chief inclusion and diversity officer
Mar 05, 2021
Chick-fil-A’s annual $5 million True Inspiration Award is now exclusively for Black-led organizations or those that serve communities of color
Mar 04, 2021
Nearly 30% of restaurant operators say business won't return to normal for at least a year
Mar 04, 2021
Chipotle will be tying executive compensation to diversity and sustainability goals
Mar 04, 2021
Stimulus checks could give restaurants a boost for up to 7 weeks, research shows
Mar 04, 2021
Featured
Chain restaurants take to oat milk as a coffee enhancer as well as a dessert base
Mar 05, 2021
Beyond Meat announces partnerships with McDonald’s and Yum Brands
Feb 25, 2021
McDonald’s commits to leadership diversity; 35% of leadership roles will be held by people from underrepresented groups by 2025
Feb 18, 2021
Just Salad makes reusable bowls available for pickup orders, with delivery in the works
Feb 22, 2021
NRA Show
brought to you by 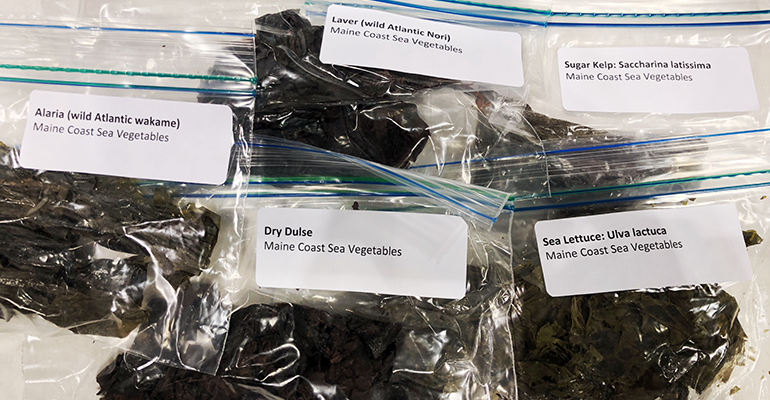 U.S. consumption is growing about 7% a year, expert says

Sea vegetables are riding a new wave of popularity beyond the nori sushi wrapper and the occasional cold seaweed salad, according to James E. Griffin, an associate professor at Johnson & Wales University.

Consumption in the United States is growing at an estimated 7 percent annually, Griffin told a “See Sea Vegetables” session at the NRA Show on Sunday.

“Sea vegetables in the higher level of dining have been growing rapidly over the past 10 years — and over the past three incredibly fast,” the educator at the Providence, Rhode Island-based university said.

Seaweed provides flavor as well as umami to dishes, he said, adding: “It doesn’t taste like fish or seaweed at all.”

“It’s an umami bomb,” Griffin said. “The secret behind all that is that it has a high level of glutamic acid, which is in the flavor enhancer MSG [monosodium glutamate], and it’s found in a natural form in almost all sea vegetables.”

The fine-dining sector is leading the way, Griffin said, and U.S. consumers still lag a bit behind Asia and Europe in consumption. And seaweed is appearing across the menu, from savory appetizers to sweet desserts.

Griffin said chef Rene Redzepi at Noma in Copenhagen, where seaweed hangs from the rafters, is using seaweed in a variety of ways.

At Smyth in Chicago, chefs John B. Shields and Karen Urie Shields have earned two Michelin stars with such sea vegetable creations as a Sea Lettuce Cookie amuse bouche.

“For chefs,” Griffin said, “this is something sexy. It’s something exciting, and something we don’t work with all that often.” Other innovations in seaweed, which is an algae, include:

• At the Clove Club in London, chefs are offering snacks such as Hot Smoke Lamb Ribs with Mint and Seaweed Jelly.

• At the Fat Duck in Bray, England, chef Heston Blumenthal has earned three Michelin stars with a menu that includes Cornish crab and caviar with sea vegetables.

• At the two-star El Club Allard in Madrid, chef Marla Marte infuses risotto with sea vegetables, and uses it in salads and as crisps.

Griffin offered suggestions and cautions about working with the three types of seaweed, which include delicate green, robust brown and red, which falls between the other two.

It can be purchased fresh or dried, with the dry version being the most common. About 90 percent of the seaweed consumed in the United States is imported from Asia, Griffin said, though he was using product from Maine Coast Sea Vegetables of Hancock, Maine.

He also said those with shellfish allergies should avoid seaweed, as it can contain particles of skeleton shrimp and other crustaceans that live in it.

Griffin said sea vegetables are known to accumulate heavy metals from the surrounding water, so chefs should double check to make sure their seaweed comes from a known source that tests for those.

Sea vegetables are highly sustainable, with the typical six- to eight-month farming span done without fertilizer, pesticides, herbicides or feed.