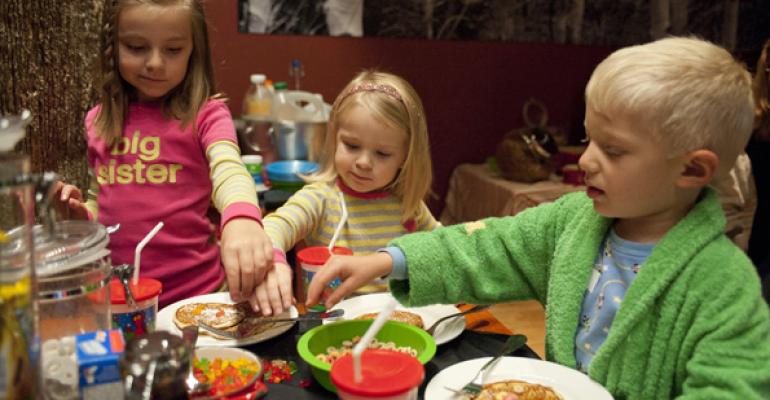 Restaurants are seeing less of their youngest and arguably fussiest customers. Not only are parents taking children out less frequently, but kids themselves say they would rather eat at home, forcing operators to rethink their child-focused offerings.

From more healthful fare to programs designed to engage kids in the culinary process, options designed to lure in families are popping up at chain and independent restaurants alike — and working to increase sales and traffic.

“For business it has been tremendous,” Ype von Hengst, executive chef of the 14-unit Silver Diner, previously told Nation’s Restaurant News in reference to an overhauled kids’ menu. “We are getting younger families back.”

The Rockville, Md.-based family-dining chain revamped its kids menu in April 2012, increasing traffic and improving sales through the addition of such items as teriyaki salmon, brown rice and edamame. Von Hengst developed the menu by bringing in a panel of 31 customers aged 5-12 to judge the items. Twenty of those items fit the nutritional criteria set by the National Restaurant Association’s Kids LiveWell program — which publicly informs parents of healthful kids' options at participating restaurants — and all of the entrées come with fruit or vegetables and juice or milk. Soda and fries are only available upon request. 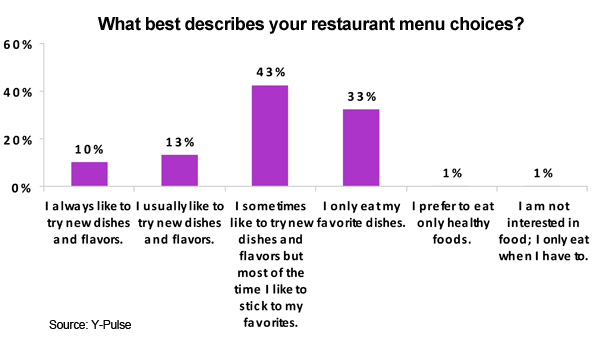 For many, family traffic is increasingly hard to come by, according to recent reports. Most kids would rather eat at home than in most restaurants, according to Y-Pulse, a Chicago-based firm that specializes in studying kids and young adults.

A survey of 500 boys and girls ages 8 to 13 released in August found that 58 percent of kids love eating at home and 39 percent like it. That’s a 97-percent favorable response. 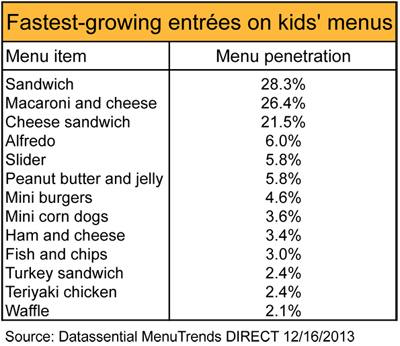 The Port Washington, N.Y.-based consumer research firm reported that, for the year ended June 2013, consumers overall made 7 percent fewer visits than they did five years earlier — 194 instead of 209 — while households with incomes under $45,000 with kids under 18 visited 16 percent less often — 145 times instead of 173. More affluent families with kids visited an average of 181 times, down nearly 12 percent — an indication that it’s not only the economy but also other factors that are keeping families at home.

“What’s out there has not been attractive to families with kids,” NPD analyst Bonnie Riggs told NRN in November. “They want something different, too.”

Operators are increasingly aware of that, and one place they are turning their attention is to nutrition.

Many chains have been working to offer more nutritious meals to their young guests. McDonald’s added apples and shrunk the size of the fries in its Happy Meals back in 2011, and in May KFC launched its Li’l Buckets meals, with default offerings of grilled drumsticks, green beans, a squeezable applesauce packet and water, for a total of 210 calories at a suggested price of $3.99.

Burger King, in introducing its lower-fat Satisfries in September, recommended franchisees charge between 20 cents and 30 cents more for them, except in kids meals where officials said the fries should be added free of charge.

But straying too far from what kids expect can be a problem, according to Y-Pulse. Forty-three percent of young respondents to its survey said that, although they sometimes like to try new dishes and flavors, most of the time they like to stick to their favorite, and 33 percent said they only eat their favorite dishes.

Some chefs are trying to change such feelings by teaching children more about their food.

“We always try to give the children a real food experience,” said Dominique Tougne, chef and owner of Chez Moi in Chicago. “The croque monsieur, for example, is made with natural bread [pain au levain], French ham and Gruyère cheese.”

The $7 sandwich also comes with a salad. Chez Moi’s “Menu Enfants” also has an $11 petit steak frites, kid-sized roast trout with potatoes for $10, and roast chicken with fries for $10. Milk, at $2, is priced below the cost of soft drinks, which are $3. Shirley Temples and Roy Rogers are available for $4.

Some restaurants set aside special times of day for families. At Bob’s Clam Hut in Kittery, Maine, every Wednesday is Kid’s Night — kid’s meals are $2 each, including a small drink with refills and ice cream. Entrées include burgers, grilled cheese and chicken tenders, as well as more New England-specific items, such as fried clams and fish & chips. All tips for the evening are donated to the local parent-teacher association and a local non-profit childhood hunger relief organization called End 68 Hours of Hunger. Bob’s also provides matching funds to the charities.

In December, Pizza Rock in Las Vegas launched a weekly Kids in the Kitchen program, in which parents and their children learn how to make pizza. The class is held every Saturday at 10:30 a.m., and is priced at $10 per person. All proceeds go to St. Jude’s Children’s Research Hospital.

At Second Home Kitchen + Bar in Denver, kids are invited to have Sunday breakfast in their pajamas — and kids 8 and under eat for free. From 7 a.m. to 2 p.m. the private dining room is set up with crafts and kid-friendly movies, as well as pillows and blankets. Meanwhile, adults in the main dining room can enjoy a build-your-own-Bloody-Mary bar, bottomless Mimosas, and brunch dishes such as chicken & waffles and bread pudding French Toast.

Of course, catering to kids can also be a more straightforward promotional opportunity. Mia Francesca in Del Mar, Calif., gives visiting kids the usual paper, crayons and brain teasers, but they also get bibs that say, “I ate at Francesca’s.”