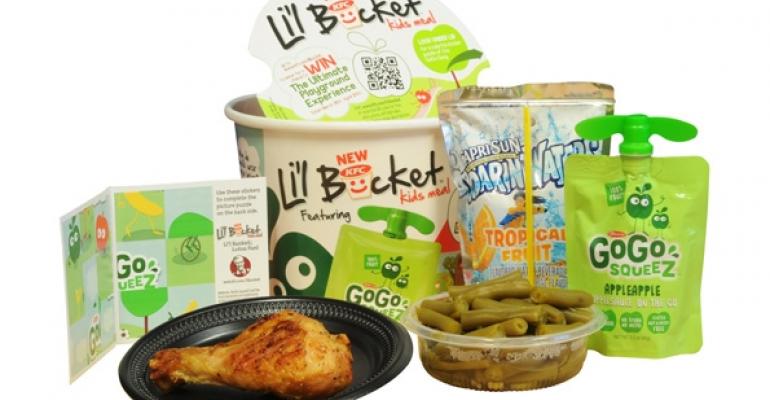 KFC's Li'l Bucket meal can be customized and has a suggested retail price of $3.99.
News

Sensing a big opportunity in its smallest consumers, KFC has introduced the Li'l Bucket kids' meal and will promote it with two social media contests.

KFC said the kids' meal's default offerings of a Kentucky Grilled Chicken drumstick, green beans, an applesauce pouch from GoGo squeeZ and a Capri Sun Roarin' Water has 210 calories, 4 grams of fat and 565 milligrams of sodium. The meal can be customized with other side dishes or chicken options, including four Original Recipe Bites, an Extra Crispy Tender or a Chicken Little sandwich.

Guests can substitute macaroni and cheese or mashed potatoes and gravy for the green beans, and 1-percent milk is an available alternative to the Capri Sun beverage. The suggested retail price of the Li'l Bucket is $3.99.

"We've found that our fans are looking for meals that appeal to moms and kids in terms of options and taste," chief marketing officer Jason Marker said in a statement. "By pairing our freshly prepared chicken choices with delicious, convenient fruit and KFC's famous sides, we've created a meal with balanced and kid-friendly options."

Marker called the Li'l Bucket the "thinking mom's kids' meal," because it aims to balance food options acceptable to parents with interactive features that their children would still find fun. He noted that GoGo squeeZ provides not only the applesauce packet but also several kid-friendly puzzle games, which are attached to the bottom of the bucket lid. "We thought we'd give them some food for though on the bucket in addition to the tasty meal inside," he said.

Though market research firm The NPD Group found in a study last year that sales of kids' meals declined in 2011, industry watchers nonetheless predicted that foods served to children would provide opportunities to grow sales in 2013. In its "What's Hot in 2013" culinary forecast that surveyed more than 1,800 chefs, the National Restaurant Association projected that among the top 10 culinary trends for this year would be healthful kids' meals, children's nutrition as a culinary theme, and whole-grain items in kids' meals.

Since July 2011, the NRA has run the "Kids LiveWell" initiative to publicly inform parents of healthful kids' options at partner restaurants. Former President Bill Clinton praised the program in his keynote speech at the NRA Restaurant, Hotel-Motel Show in Chicago last May.

Currently, neither KFC nor its sibling chains Pizza Hut or Taco Bell participate in Kids LiveWell, which has more than 80 restaurant brands as partners. KFC has committed itself to two marketing initiatives as a tie-in to the launch of the Li'l Bucket, however.

The first, the Li'l Playground Makeover Facebook contest, invites fans to nominate their local playgrounds as candidates for restoration and refurbishment to be paid for by KFC. Customers may submit photos to KFC's Facebook page to enter, or they can tag videos or photos of their playgrounds with the "#KFCPlaygrounds" hash tag on Vine or Instagram. KFC will choose up to five winners to receive funding for their playgrounds, as well as Li'l Buckets kids' meals to cater the neighborhood's first block party at the new playground.

Additionally, through April 30, families can enter the KFC Ultimate Playground Experience Sweepstakes by scanning the QR code on each Li'l Bucket. Prizes include funds to cater a block party from KFC or an appearance from the GoGo squeeZ Mobile Playground.

Louisville, Ky.-based KFC operates or franchises more than 17,000 restaurants in more than 115 countries. The chain is a subsidiary of Louisville-based Yum! Brands Inc., as are Pizza Hut and Taco Bell.